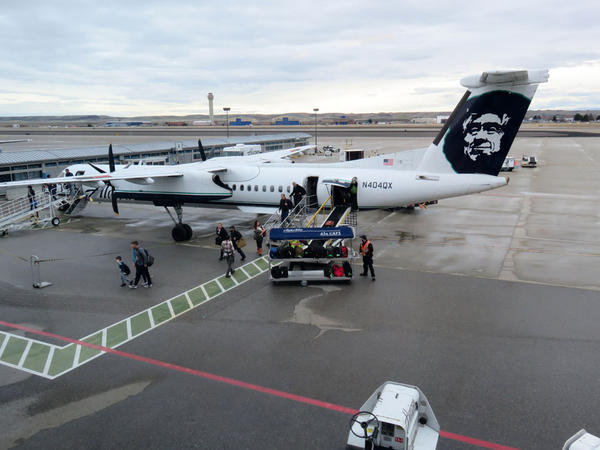 A dispute between regional airline Horizon Air and its pilots union is headed to court. It stems from how the sister carrier of Alaska Airlines grapples with an industrywide shortage of pilots.

The Teamsters union represents Horizon Air pilots. It went to federal court in Seattle on Friday to ask a judge to rescind $10,000 signing bonuses that Horizon Air has started offering new hires.

So why does the union want to cancel hefty bonuses?

“As a union, we represent all pilots,” said Captain Jeff Cox, who leads the Horizon pilots group. “If you give a chunk of money to a very small, select group, then you are depriving the other pilots of compensation and equal treatment.”

The Teamsters union asserted in its legal complaint that the bonuses for new hires cannot be introduced unilaterally. The court filing went on to claim that Horizon management was “circumventing” the collective bargaining agreement in “an effort to fundamentally undermine the Union.”

Cox said the union proposed what he called a “comprehensive” solution with higher pay and retention incentives for all pilots, but management turned that down.

“After months of negotiations with the pilot union, Horizon Air will continue to work toward a solution that’s attractive to new pilots, while respecting the contributions of existing pilots and the competitive regional airline marketplace,” an Alaska Airlines/Horizon Air spokesman wrote in an emailed response.

Cox said the pilots are prepared to call a strike down the road if they perceive that the airline’s management continues to “violate” the union contract. Pilots ratified a new contract in January 2016, which can be amended by mutual agreement.

“We do not anticipate any disruption in service,” said the statement emailed by Seattle-based Horizon.

The increasingly stiff competition to recruit new pilots is a consequence of a commercial pilot shortage that affects the regional airline sector most strongly. Numerous forces are colliding to create the problem, including growth within the airline industry, low starting pay for pilots, tough work schedules and an anticipated wave of retirements from the major airlines. The majors then backfill by plucking pilots from regional carriers. The Federal Aviation Administration requires commercial airline pilots to retire at age 65.

Then add to that, a big increase in the training requirements needed to get an air transport pilot license. That came from the FAA in 2013 in the wake of a commuter airline crash in upstate New York.

A lot of commercial airline pilots used to come over from the Air Force too, but Horizon Air Director of Pilot Development and Recruiting LaMar Haugaard said the military does not train as many pilots as it used to.

“Marry that up with fewer and fewer people getting into the industry — mainly due to becoming cost-prohibitive on the training side — you have a shortage that will come from that,” Haugaard said in an interview with public radio in October. “And we are certainly seeing that now.”

Both Horizon Air and its pilots union mention crew shortages as one factor in a spate of flight cancellations in December and early January. The number of cancellations directly attributable to lack of pilots — as opposed to ferocious winter weather or mechanical issues — could not be independently verified. Cox said Horizon and Alaska Air dispatchers were sometimes able to substitute mainline Alaska Airlines jets and crews to minimize the impact on passengers.

Horizon Air also raised the hackles of its pilots union by including recruiting incentives in partnerships it has signed with flight schools to expand the training pipeline. Last October the airline inked a pilot development agreement with Central Washington University’s aviation department and in December it offered similar terms to aspiring pilots at Hillsboro Aero Academy in suburban Portland.

Eligible aviation students on track to earn their commercial pilot certificates can receive a $7,500 stipend and a conditional job offer from Horizon Air in exchange for a commitment to fly for the regional airline for at least two years.