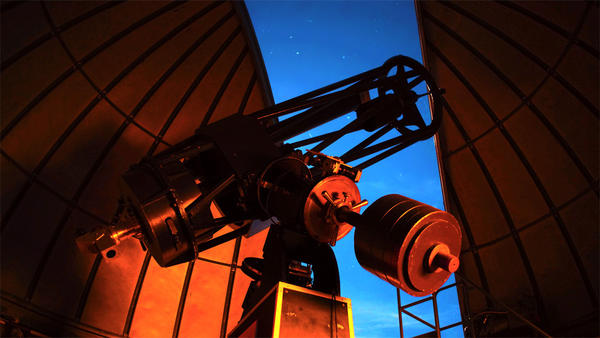 Observatory’s Cosmic Upgrade Grinds To A Halt For Earthly Reasons

Large crowds are expected to flock to Goldendale Observatory State Park to watch the August 21 eclipse. But as visitors look to the skies, they may not realize a renovation of that south central Washington observatory is on hold for very earthly reasons.

The Goldendale Observatory boasts one of the largest, public telescopes in the country.

“This is like the perfect facility to take a budding scientist and turn them into a future astronomer,” Goldendale Chamber of Commerce Executive Director Dana Peck said.

Peck said the telescope recently got a major upgrade. The next step is to demolish and renovate the surrounding 44-year-old facility. Highlights will include a new 150-seat auditorium and rooftop observation deck.

But now those plans are on hold. That’s because Washington lawmakers failed to pass a capital construction budget before leaving town last month.

“The concern that we’ve got is that we want to get the new building underway for the next season and we’re in the process of losing probably a year of progress,” Peck said.

The capital budget that hasn’t been approved includes $2.25 million for the Goldendale Observatory project.

Before they went home, lawmakers did reauthorize previous money for the project. But Virginia Painter with Washington State Parks said it’s not enough to proceed with the project.

“You’ve got to do demolition and construction at the same time under the same contract,” Painter said. “You can’t really separate it out.”

When completed, the Goldendale Observatory State Park renovation will feature new buildings, landscape, restrooms, parking and outdoor viewing spaces. It will also comply with the Americans With Disabilities Act.

While the capital budget enjoys bipartisan support, Senate Republicans have refused to pass it until House Democrats agree to a “fix” to a Washington Supreme Court decision in the so-called Hirst case that has halted domestic well drilling across the state.

A group of lawmakers returned to Olympia earlier this week with the goal of re-starting negotiations on how to address the well drilling issue. If they are able to find agreement, Gov. Jay Inslee could call the legislature back into special session to pass both the Hirst fix and the capital budget.

It was supposed to be former Washington Lt. Gov. Cyrus Habib’s legacy — a pair of programs to serve youth with disabilities and youth from marginalized or disadvantaged backgrounds. But Habib’s successor cancelled a contract with the nonprofit that operates the programs after identifying what his office called “suspicious financial activity” during Habib’s last year in office. Continue Reading Programs For Disabled And Disadvantaged Washington Youth Imperiled After Lieutenant Governor Cancels Funding Amid Ethics Probe