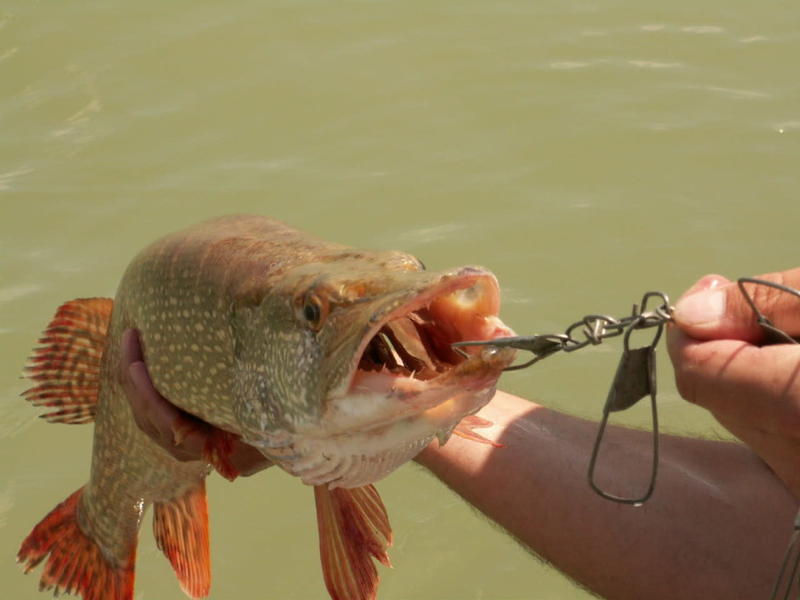 They’ve been called devil fish. They’re No. 1 on the hit-list for invasive aquatic life in Washington waters. And they’re creeping farther and farther down the Columbia River system.

“We’ve seen their populations explode” over the last two years, said Holly McClellan, the principal biologist with the Confederated Tribes of the Colville Reservation. “The more juveniles you have, the more potential for them to move downstream. So we’re just really trying to turn the faucet off at Lake Roosevelt.”

When northern pike invade waters they’re not native to, they can wipe out entire populations of fish already present. In Lake Roosevelt that’s a problem for red band trout and kokanee (both native only to the lake).

Below Grand Coulee is Chief Joseph Dam. Biologists consider it the last line of defense. They don’t want the voracious northern pike to reach imperiled salmon and steelhead beyond the concrete barrier.

“They’re not afraid to eat,” said Joe Maroney, director of fisheries and water resources for the Kalispel Tribe.

That’s bad news for salmon. And it’s why the Colville tribe, the Spokane Tribe of Indians, and the Washington Department of Fish and Wildlife are trying to get a jump on the problem — before it’s too late.

In 2010, the tribe started fishing with gill nets to catch as many of the non-native fish as possible. That year they caught nearly 6,000 northern pike. This spring, they only caught 35.

“We were pretty excited,” Maroney said. “There was a lot of attention given to this where a lot of people in the Columbia Basin thought that we could not do it.”

People said the lake was too large; the fish were too numerous. But biologists were able to place gill nets near northern pike spawning grounds and slowly clear them out.

It’s been more difficult at Lake Roosevelt, said Bill Baker, the area’s district fish biologist for the Washington Department of Fish and Wildlife.

“It’s been challenging,” Baker said. “(Lake Roosevelt) is vast. So far it’s been difficult to locate large congregations of fish in a localized area.”

The lake is 151 miles long. It’s huge. The Colville Tribe has seen some success with a fish bounty program. With the help of a grant from Chelan PUD, they pay anglers $10 per northern pike. Anglers have caught more than 1,000 fish since May 2017.

Northern pike have become such a problem that the Washington Invasive Species Council ranks northern pike as the most dangerous invasive aquatic life that has reached the state.

Eradicating the fish is hard, but Maroney said you have to be as aggressive as the fish. The tribe has been able to advise people in other states with northern pike problems. Now they’re helping out at Lake Roosevelt.

“You just have to put forth the resources,” he said.

The tribes and state are asking the Bonneville Power Administration for help. The agency often provides funds for projects — in an effort to lessen habitat problems caused by hydropower dams.

The coalition has submitted a proposal for $4.5 million over five years — mostly funded through the BPA — to help suppress the fish. But the administration says it’s already allocated all its funding for 2018. (The proposal’s 2018 cost would amount to more than $840,000.)

“There is no new money available for projects,” said John Skidmore, the Oregon implementation manager for BPA’s fish and wildlife program. “Something else is going to have to be adjusted to make this project go forward.”

A decision should come down by the end of January.

Back at Lake Roosevelt, Colville biologist Holly McClellan said the tribe is running low on funds. And it can’t dally getting rid of these fish.

“The consequences of inaction or insufficient action,” she said, “will definitely result in full-scale ecological changes to Lake Roosevelt’s fish community.”