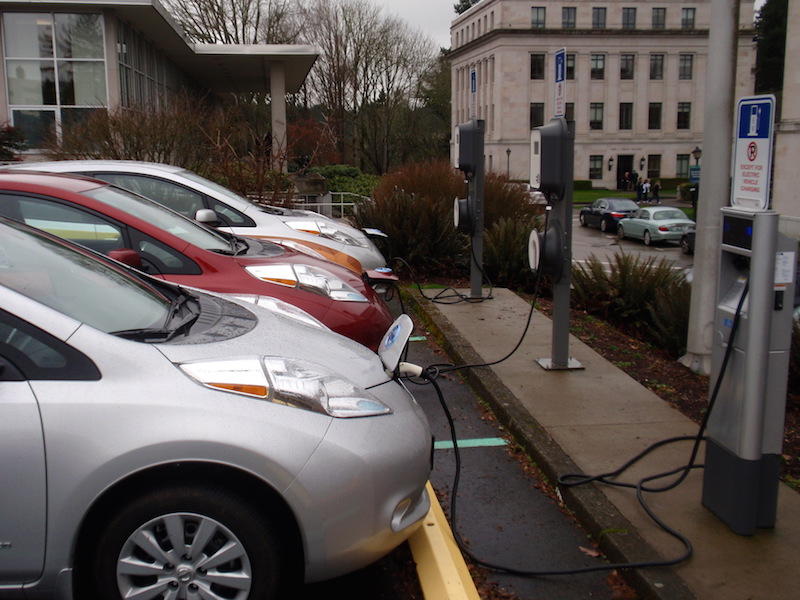 If you’re considering buying an electric car in Oregon or Washington, you might want to pay attention to possible changes in tax policy. There’s uncertainty about the tax incentives meant to spur electric car sales.

For years, Washington state has waived the sales tax on qualifying electric car purchases. In 2016, the Legislature put a cap on how many more plug-in car buyers they would subsidize. The tax break would go away after 7,500 vehicle sales. At the current pace, that will happen sometime this spring.

Nearly 6,500 of the exemptions had been spoken for as of December 31, 2017, according to the Washington State Department of Licensing. Clean car boosters are now lobbying the Washington Legislature to extend the sales tax break.

“The most important tool to drive electric vehicle adoption is an incentive that lowers the purchase cost of the vehicles,” the regional industry advocacy group Forth, formerly known as Drive Oregon, wrote.

Meanwhile in Oregon, drivers who buy or lease electric cars beginning this month theoretically qualify for cash rebates up to $2,500 on vehicles with an MSRP under $50,000. But the Oregon Department of Environmental Quality is warning car shoppers the rebates are delayed and not guaranteed. That’s because the eligibility rules are still being drafted and there’s also a legal challenge that may take away the money for the rebate. That case involving a dealership tax is pending at the Oregon Supreme Court.

The Washington state sales tax exemption applies to the first $32,000 of the selling price of a qualifying new electric vehicle. That nets a tax savings between $2,600 to $3,100 for electric car buyers depending on where their dealer is located in Washington. The sales tax varies slightly from county to county.

The sales tax exemption also applies to monthly payments on newly-executed leases. All this is limited to fully electric and plug-in electric cars whose base model sticker price is less than $42,500, a caveat designed to exclude luxury car buyers from benefiting.

A bipartisan bill sponsored by state Rep. Jake Fey, D-Tacoma, would extend the electric vehicle tax exemption to June 30, 2021 and remove the cap. A separate bill from state Rep. Cary Condotta, R-Wenatchee, would buy time by lifting the cap to 10,000 vehicles before the sales tax exemption goes away.

The current tax exemption costs the state treasury about $1.5 million per year.

At the same time, the state House Finance Committee holds an initial hearing on another proposal from Condotta to give a sales tax exemption worth up to $10,000 to buyers of electric truck tractors. Automaker Tesla made a splash in November when it unveiled a battery-powered semi-truck. Tesla is taking reservations for the heavy-duty Tesla Semi, but it is not yet in production.

The conservative-leaning Washington Policy Center has been consistently skeptical of electric vehicle tax incentives and recently noted the slow sales of plug-in cars. On the WPC website, one of its analysts wrote the sales tax break “wastes huge amounts of money for tiny environmental benefit.”