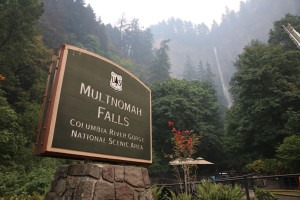 After Eagle Creek Fire, Columbia River Gorge Trails Could Be Closed For Years

The U.S. Forest Service gave an update on the conditions of Columbia River Gorge trails Friday, indicating that some of the most damaged trails “may take several years to reopen.”

Forest Service employees and volunteers have been working since the fall to assess damage from the Eagle Creek Fire to more than 20 miles of trails.

“Crews found a range of conditions from low burn severity to treacherous sections where washouts, landslides, and heavily burned conditions make trails hard to follow,” a press release from the agency stated.

Broadly speaking, workers found that trails near the edges of the fire — such as those east of Cascade Locks — suffered the least damage.

Other trails had significant damage from the fire and have been covered with rocks and debris as winter rains wash out the burn scar area.

Larch Mountain trail is about 90 percent “covered with rocks along its route to the Upper Viewing Platform, and is in poor shape through its full loop with Wahkeena Trail.”

The popular Horsetail-Oneonta loop is also in “treacherous shape,” according to officials.

While most repair work on gorge trails usually happens in the spring because winter rain constantly creates damage, trained cleanup crews will be on trails all winter trying to get popular areas in shape for the tourist season.

The Forest Service said trails west of Multnomah Falls will be a priority to fix because of their popularity.

See the full list of trail conditions and recent photos of damage.