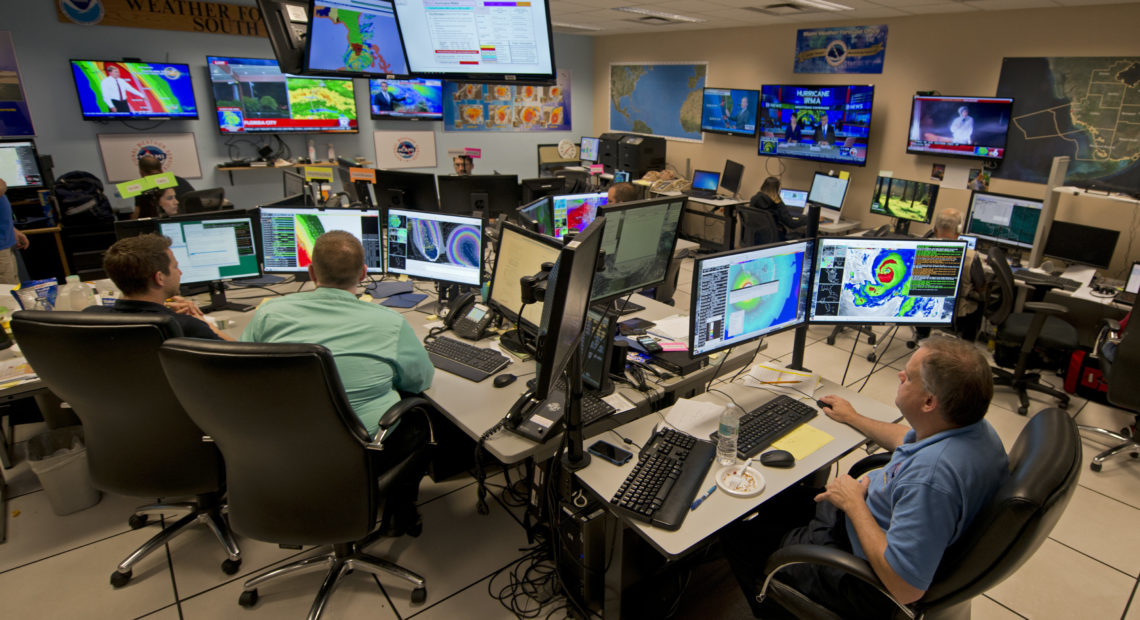 Last year, according to government figures, there were 16 “climate disaster events” with losses exceeding $1 billion each in the U.S.

So the weather is something to keep an eye on, and since 1870 what’s now known as the National Weather Service has been doing that. But for the last several years, it’s been doing so with serious staff shortages.

Now, it faces the prospect of permanent job losses.

The Trump administration wants to eliminate 355 jobs, and $75 million from the weather service budget.

“The straw is close to breaking the camel’s back right now,” says Daniel Sobien, president of the National Weather Service Employees Organization. “That will break the camel’s back.”

The employees organization represents some 2,500 weather service workers. And Sobien says right now, 10 percent of the jobs at the service are vacant.

The weather service has offices covering “a quarter of the globe,” Sobien says, from Guam and American Samoa to San Juan, Puerto Rico, and Caribou, Maine.

Mark Pellerito, a meteorologist and union shop steward at the Binghamton, N.Y., office, says they’re down five positions out of 18 total jobs. Weather doesn’t take a day off, he notes. The office needs to be staffed 24/7, meaning long hours, a lot of overtime and a family-work balance that is out of whack. “As much as we love our job, which we really do,” Pellerito says, “this is something we’ve been passionate about since kindergarten.” But, he says, “we love our families, too, and not seeing them makes it pretty difficult.”

Overworked meteorologists can also put the public at risk. Tired people make mistakes, and Pellerito says the National Weather Service is no different. “Perhaps we’re stretched thin and we miss a warning. If you’re the one who didn’t quite get to your basement in time because of that one- to two-minute delay, it dramatically impacts your life.”

Gary Szatkowski, now retired, was the meteorologist in charge at the Mount Holly, N.J., office, which provided forecasts for the Philadelphia area, and compares the staffing shortage to driving down the highway with bald tires. “I couldn’t tell you whether you’re going to get a flat tire in the next mile or you might drive another 500 or a thousand miles on bald tires and not have a problem,” he says. “But it’s a risky behavior and that’s unfortunately the place the operations staff for the National Weather Service has been put in for a number of years.”

The Commerce Department, which oversees the National Weather Service, declined to provide a spokesperson for an interview. But in an email, an official said the service plans to hire 80 additional meteorologists by April 1 to address the current staff shortage, and it is working to speed the hiring process, including expedited background checks.

The official said under the proposed budget, the National Weather Service would “begin implementing a series of operational reforms aimed at increasing staffing flexibility,” which could mean “reducing operational hours at various offices while maintaining meteorological services through collaboration with other NWS offices,” and “making better use of collaborative forecast processes, technological innovation, and a more efficient forecaster career path.”

The official says that while the fiscal year 2019 budget would reduce positions by 355, this equates to 217 full-time employees.

Still, Sobien says some offices, including those in San Francisco and Tampa, will have to close on nights and weekends with the result there will be “really no coverage there.” He added, “another office will look at the weather for them. It’s a dangerous idea. They’re risking peoples lives.”

It’s not clear what Congress will do with the proposed Trump budget. But weather service employees worry more cuts on top of current staff shortages will create the perfect storm at an agency that has been trusted and relied on.