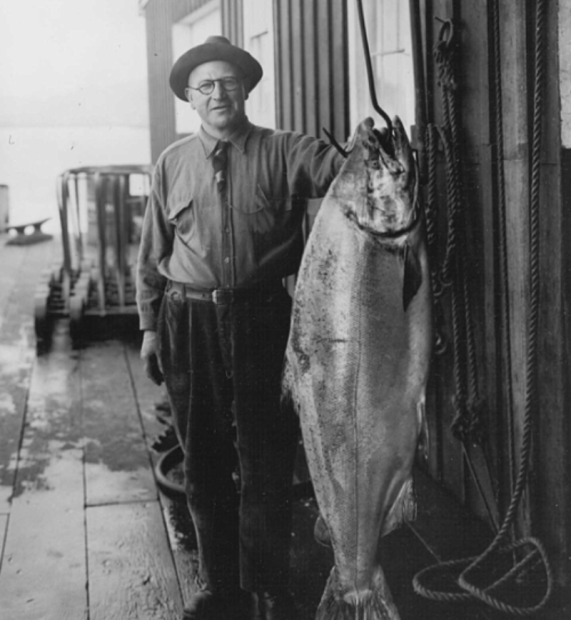 This Is Why You Don’t See People-Sized Salmon Anymore

While the orcas of Puget Sound are sliding toward extinction, orcas farther north have been expanding their numbers. Their burgeoning hunger for big fish may be causing the killer whales’ main prey, chinook salmon, to shrink up and down the West Coast.

Chinook salmon are also known as kings: the biggest of all salmon. They used to grow so enormous that it’s hard to believe the old photos now. Fishermen stand next to chinooks almost as tall as they are, sometimes weighing 100 pounds or more.

“This has been a season of unusually large fish, and many weighing from 60 to 70 pounds have been taken,” The Oregonian reported in 1895.

“It’s not impossible that we see individuals of that size today, but it’s much, much rarer,” University of Washington research scientist Jan Ohlberger said on Monday, more than a century later.

Ohlberger has been tracking the downsizing of salmon in recent decades, but salmon have been shrinking in numbers and in size for a long time. A century’s worth of dam-building, overfishing, habitat loss and replacement by hatchery fish cut the average chinook in half, size-wise, studies in the 1980s and 1990s found.

Dam-building and fishing have tailed off, but chinooks have been shrinking even faster in the past 15 years, according to a new paper by Ohlberger and colleagues in the journal Fish and Fisheries. Older and bigger fish are mostly gone.

Few fish are making it to old age, which for a chinook salmon means spending five or six years in the ocean after a year or two in freshwater.

“The older fish, which normally come back after five years in the ocean, they come back earlier and earlier,” Ohlberger said.

The trend is clear, the reasons less so.

Two species eat more chinook salmon than any others: orcas and humans.

The 2,300 or more resident killer whales in the Northeast Pacific Ocean eat about 20 million pounds of chinook salmon a year — roughly equal to the annual commercial catch of chinook in recent years, according to the new study.

“There is a large number of resident killer whales out there that really target chinook, and they target the large chinook,” Ohlberger said.

A study from federal researchers in November found that orcas’ consumption of chinook salmon in the Northeast Pacific Ocean has doubled since 1975, surpassing humans’ catches, which have fallen by a third over that time.

“As far as we can see, the killer whales are taking the older and bigger fish,” said Craig Matkin, a whale researcher with the North Gulf Oceanic Society in Homer, Alaska. Matkin, who was not involved in Ohlberger’s paper, studies Alaskan orcas’ diets.

“We go along with the animals and scoop up fish scales and bits of flesh from where they kill something,” Matkin said. “They’re sloppy eaters.”

“They’re going to go for the biggest, oiliest fish there are,” Matkin continued. “That’s chinooks.”

Salmon born in Oregon and Washington spend most of their lives out at sea, often in Alaskan waters, where orcas aplenty await.

“Our [orca] populations have increased faster than anywhere else, and they’re eating chinook from all over the place,” Matkin said.

In short, it seems Puget Sound orcas are having their lunch stolen by their better-off Alaskan relatives.

“It is an interesting twist to blame the marine mammals,” Ken Balcomb with the Center for Whale Research on San Juan Island said in an email. “I would first ask how the chinook evolved to be so big during the preceding 12,000 years in the presence of hordes of such size-selective natural predators throughout their range. Large size was selected by Mother Nature for chinook salmon in spite of natural predation.”

Balcomb points to overfishing, habitat loss and salmon hatcheries that have diluted the gene pool of wild chinooks.

Today’s smaller chinook salmon lay fewer eggs than bigger ones can. They also have a harder time digging out gravel nests deep enough to protect their eggs from scouring streamflows.

Chinooks’ downsizing could spell trouble for all the mammals who want to catch them, whether they have fingers or fins.

“Predators are also going to adapt to this change in size and numbers,” Matkin said. “You can’t look at it as a static situation.”

“Ultimately, the whales must eat to survive, and humans have not sufficiently allowed for that in their fisheries management calculations,” Balcomb said.

John Ryan loves getting tips and documents. He can be reached at [email protected] or on the encrypted Signal or WhatsApp apps at 1-401-405-1206 (whistleblowers, never do so from a work or government device, account or location). For greatest security, use KUOW’s SecureDrop portal. Snail mail is also a safe way to reach him confidentially: KUOW, 4518 University Way NE #310, Seattle, WA 98105. Don’t put your return address on the outside.