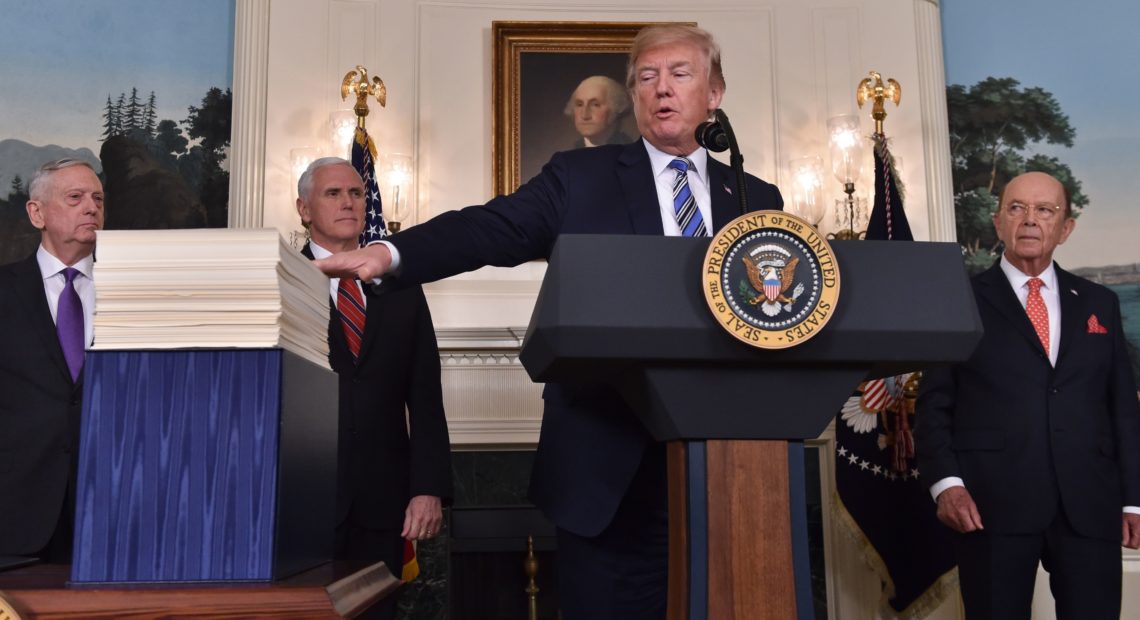 Is This Any Way To Drive An Omnibus? 10 Questions About What Just Happened

PHOTO: President Trump speaks about the recently passed spending bill at the White House. He had threatened to veto the bill before later signing it. CREDIT: NICHOLAS KAMM/AFP

March has been teeming with news stories from Washington, from burgeoning trade wars to White House shake-ups to tales of sex scandals and shakedowns.

But in the midst of it all, much of America found time to focus on last week’s $1.3 trillion federal spending package. The fiscal behemoth suddenly appeared at midweek and astonishingly became law less than 48 hours later.

It was Wednesday when leaders in Congress lifted the veil on the spending bill, knowing that few would be able to examine it in all its 2,200 pages of glory before the vote came on Thursday.

They knew that very few citizens, news people or members of Congress would manage to read what members would be voting for just ahead of their getaway planned for Friday. (Congress is now on break until April 9.)

All this might have slid by under the cover of other, juicier news. But the nation whiplashed back to attention when President Trump tweeted Friday morning that he was considering a veto of this latest, vast and lavish spending bill. Among other objections, he said no one had read it yet. And indeed, few had.

But less than four hours later Trump summoned the cameras to explain why he had gone ahead and signed the bill after all — with no changes. It turned out he had done the signing earlier, shortly after sending that veto threat via tweet.

Many of the president’s most ardent supporters were taken by surprise. Not a few felt betrayed.

(“Stabbing me in the back!” shouted Rush Limbaugh from atop the conservative talk radio world as he watched the president’s news availability. Limbaugh had assured listeners the day before that Trump could not and would not sign the spending bill.)

So if any or all of this prompted questions in your mind, here are some first attempts at answers.

1. Does Congress really vote on big, important bills without reading them?

Short answer: Yes, it does so routinely, and for several reasons. First, ask yourself, when was the last time you read anything 2,200 pages long? If you ever did so, was the text in plain English or in “statutory language” full of coded references to sections of the U.S. code of laws? Would you read that many pages yourself if there was a summary available, one that could be read and interpreted by a member of your staff? And even if you wanted to read all 2,200 pages yourself, could you do it overnight?

A longer answer: Members have complained for years about leaders’ stratagem of forcing a snap decision on yes-or-no in the eleventh hour, even on the most consequential legislation. Sen. Rand Paul, R-Ky., has been among those saying the law should mandate a reading period before voting on big spending bills. Advocacy groups on the left and right have agreed: Congress should not rubber-stamp bills sight unseen.

Back in 2009, one of the Senate Democrats fashioning what became the Affordable Care Act had to admit he had not read all the “statutory language” it contained. Some of his constituents were outraged, but the senator said such objections were misplaced. Just before Christmas last year, it was the Democrats protesting the rapid sequence of rollout-to-roll call for the Republican tax cut bill.

2. Why wasn’t there more time for reading and debate?

Short answer: Because March 23 was the deadline for a new spending bill, a deadline specified in the last, stopgap bill back in February. Without a new bill to keep the dollars flowing, the government would have shut down — at least partially — at midnight Friday night.

To avoid this, leaders from both parties in both the House and Senate have been working for weeks on this major set of compromises, the broad outlines of which had been agreed to last month. The White House has been represented throughout the talks by the likes of legislative director Marc Short and the emissaries of Office of Management and Budget Director Mick Mulvaney. All sides did not reach the final agreement until this past week, and they did not have a product they could show their colleagues in Congress until Wednesday. At that point, there were bound to be objections on the basis of process, on the basis of policy, and on issues of secrecy versus transparency in governing.

3. Why is the bill so all-encompassing and the bottom line so enormous?

This bill basically flashes the green light for spending on all the discretionary functions of the federal government, which means everything except entitlements (Social Security, military and other pensions, and the interest payments on the national debt). That covers a lot of government for a whole fiscal year.

The bottom line in dollars was a mind-boggling record, in part because President Trump demanded and got the biggest increase in defense spending in 15 years. Also escalating the price tag was the Democrats’ insistence on rough parity for spending increases for domestic programs as well.

All this new spending is, of course, entirely debt-financed. That is because previous spending levels were already higher than revenues and because the recent tax cut bill further widened that gap by reducing those revenues. The next budget’s deficit will be in the neighborhood of $1 trillion for a single year.

While this is apparently no longer anathema to the Republican Party leadership, in Congress or the White House, it remains deeply disturbing to individual members and to anti-debt conservatives everywhere.

4. Why is all this being done right now?

Short answer: It’s a gargantuan do-over. Because Congress didn’t do the spending process back when it was supposed to by law back in 2017. The House and Senate are required by statute to each pass 12 bills appropriating the money for all discretionary spending. They are supposed to work out the differences between their respective versions and present them to the president for him to sign them into law. That did not happen in 2017 for a variety of reasons. Since then the government has remained open via a series of stopgap spending bills called “continuing resolutions.”

The latest action is not much more than an ongoing set of orders, but at least it gets us through the current fiscal year, which ends Sept. 30. That means the whole appropriations process (the statutory process for spending Uncle Sam’s money) has to be struggled through again for the next fiscal year.

Sadly, yes. And something very much like it may happen again very soon. Back in 1988, President Ronald Reagan dropped a 42-pound pile of paper on the speaker’s lectern as he began his State of the Union speech. He said he would never sign such a bloated, omnibus spending bill again. The president was frustrated because his party did not control either chamber of Congress and had trouble negotiating with the Democrats. Appropriations would break down and at least some of the spending bills would be lumped together in an omnibus.

On another occasion, Reagan had his staff stack all the pages on a hand truck for purposes of a news conference where he denounced the process. At that news conference, Reagan complained about not having line-item-veto power as president the way most governors did. Does any of this sound familiar?

In fairness, Congress did step back from the constant confrontation for a time after that. From 1987 through 1994, the Democratic Congress managed the traditional process without the need for an omnibus in all but two budget cycles.

But in the mid-1990s, the budget battles intensified again, this time between a Democratic president (Bill Clinton) and a Republican Congress. From 1995 through 2005, the omnibus had to be rolled out in seven years out of nine because the regular order for spending bills had fallen short.

In a sense he surely means it. No one would want to be jammed on a major move such as this with so little time to maneuver. On other kinds of legislation, he could let Congress leave town and confront the issue when it came back. But if you have one monster bill funding the government, the veto option becomes the government shutdown option. And that set of choices could well recur the next time the deep divisions in Congress frustrate the “regular order” of the spending process and result in an omnibus.

A veto was an option, but it would mean shutting the government down. That’s what happened in 1995 and 1996 when a feisty Republican Congress passed a big package of spending cuts knowing President Bill Clinton, a Democrat, did not want to accept it. Clinton used his veto, and the government shut down — the second time for weeks. Blame for the impasse seemed to settle on Congress, at least in the polls. Since then, presidents have been reluctant to force the issue if a veto meant a shutdown.

8. What’s wrong with Trump calling for a line-item veto?

The president can surely call for a line-item veto. Presidents regularly did so for decades. It would enable them to “line out” a single item in the budget the way most governors can do. But 20 years ago the issue reached the U.S. Supreme Court, which decided that such a power would violate the Constitution’s view of the power of the purse. That put an end to the discussion. Of course, you could always change the Constitution. That only takes two-thirds in the House and in the Senate and ratification by three-fourths of the states. That’s only happened once for a newly written amendment in the past 50 years.

9. Why shouldn’t Trump call for an end to the filibuster?

If anyone thinks so, that someone is keeping it a secret.

And it’s not the way Congress is supposed to spend money, either. The way it’s supposed to work is an orderly process of considering a dozen separate and distinct “appropriations bills” that cover all discretionary spending (as opposed to entitlement payments to Social Security recipients and others).

Instead, in its times of duress, Congress falls back on a massive bill appropriating enormous amount of money for a vast array of agencies and programs. Inevitably, some of those outlays are more popular than others, reviled by some and revered by others. But all have some form of constituency that has some form of power.

No one member is responsible for everything in the bill, but there is always at least one someone whose fingerprints are on each individual item (usually lots of someones).

So someone is getting credit for each spending decision of “yes.” At the same time, when every “yes” decision has been aggregated in an amalgam of legislation, it becomes next to impossible to fix individual blame for the overall dollar result of all those yeses.

And so the dollar totals continue to mount.