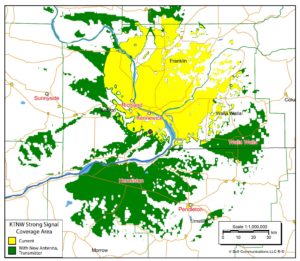 NWPB is preparing to buy a new antenna and transmitter for KTNW-TV, its Tri-Cities-Walla Walla public television station. Most of the funds – and the requirement to upgrade – come from the Federal Communications Commission as part of its effort to redistribute the broadcast spectrum. NWPB needs help from friends to fund the rest.

In the process, the FCC approved an expansion of KTNW’s signal into Umatilla, Morrow and Walla Walla counties. While the FCC will pay more than $250,000 of the cost to replace the signal, NWPB must raise an additional $30,000 for the expanded signal.

Already two charitable trusts in Walla Walla have stepped up to provide $5,000 toward the unmet need. We encourage you and your family, friends and neighbors who value public television to pitch in to meet the $25,000 goal with a pledge of support this year. Pledges made today can be paid any time before Dec. 31.

The project will bring educational programs to kids, companionship and mental stimulation to older adults and trusted, engaging programs to everyone in its reach. Won’t you help Curious George, Masterpiece, PBS NewsHour, Nova and Rick Steves reach more people?