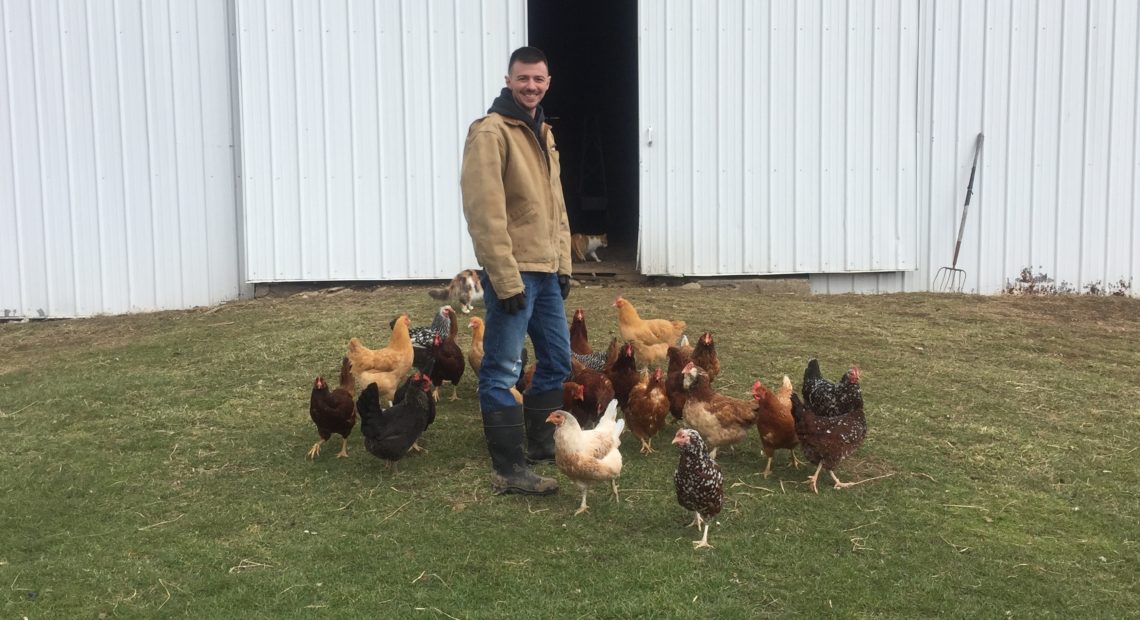 Most weekday mornings, after feeding the chickens, goat and cows, Nicolas Talbott drives through the rolling hills of Columbiana County in eastern Ohio to one of the schools where he is a substitute teacher. It was a busy winter — lots of teachers out with the flu. And while Talbott enjoys teaching, he hopes to move on soon, to a career in the U.S. Air Force working on global security.

But Talbott, a 24-year-old transgender Kent State graduate, is facing a roadblock from the man in the nation’s highest office. President Trump wants to effectively ban transgender individuals from serving in the armed forces. For now, the virtual ban is on hold while four federal lawsuits proceed. Talbott is a plaintiff in one of those suits.

“There’s nothing about being transgender that makes you any less capable than anybody else of military service,” says Talbott.

Federal courts ruled late last year that the Trump administration must allow Talbott and other potential recruits to enlist while the lawsuits proceed. Talbott spoke to several recruiters more than a year ago. Several seemed unsure about working with him. Then he called an Air Force recruiter and the two clicked. That recruiter is the main reason Talbott is trying to enlist in the Air National Guard.

“He was the one who said, ‘Wow, this is awesome. I really want to learn about this so that I can help other folks in the future,’ ” Talbott says, recalling that first conversation. “That’s the kind of attitude, that’s what I would expect from the military, that attitude of hey, this is a new challenge for me, let’s face it head-on.”

Talbott has filed piles of documents including letters from a counselor and doctors that show his gender transition has been stable for at least 18 consecutive months. That’s one of the requirements the military is using when processing current applicants who are transgender.

“I’ve been seeing the same doctor for about five years now — I definitely made that 18 months,” Talbott says.

Talbott studies and works out daily while he waits to be called in for a physical exam and the entry vocational aptitude test. He says he can hit the minimum male boot camp standards for running, pushups and situps. The testosterone Talbott takes is helping him close differences in muscle mass and bone density as compared with non-trans men. He is aiming for the top performance tier.

“That’s what military readiness is really about. Are you able to put on that uniform and do your job to the best of your ability every day?” says Talbott. “That’s what it’s about. It’s not about what you look like under that uniform.”

“The Department of Defense concludes that there are substantial risks associated with allowing the accession and retention of individuals with a history or diagnosis of gender dysphoria and require, or have already undertaken, a course of treatment to change their gender,” wrote Mattis in a memorandum dated Feb. 22. He goes on to say that including service members who are or have been diagnosed with gender dysphoria, the medical condition for someone who transitions, “could undermine readiness, disrupt unit cohesion, and impose an unreasonable burden on the military that is not conducive to military effectiveness and lethality.”

Some other transgender men and women are putting off or abandoning efforts to join the military as the political and legal fights drag on.

Both Mattis and a Pentagon spokeswoman have declined further comment about those recommendations because they are part of pending litigation. To Talbott’s buddy James Napierkowski, 22, that sounds like the same claim once used to keep women and openly gay service members out.

“Both times it’s proved to be not disruptive at all and only bring in more qualified people into the military who want to help and can help,” says Napierkowski, a senior airman with the Ohio National Guard.

Napierkowski, speaking for himself, says the military will need to bring transgender troops into service slowly so that active service members can get to know men and women like Talbott.

“But once [current troops] realize that [transgender service members] are just people like everyone else, it’ll be just fine and be very beneficial,” Napierkowski says.

Talbott says he realizes he will be under a spotlight, answering lots of questions about being transgender.

“There are going to be situations where it’s going to very obvious that I’m trans, you know, in the showers and that sort of thing,” Talbott says. But he says he focuses on his “purpose” — “to put on my uniform and do my job.”

The two friends, roughly the same medium height and lean-muscled build, both with short, cropped hair, trade tips on running and video games. When Talbott gets discouraged, Napierkowski stops by to offer a pep talk.

“Till things get sorted out, one way or another, just keep pushing and eventually you’ll break through, hopefully,” says Napierkowski, in between bites of doughnuts on a Sunday afternoon.

“Until then I’m just going to keep living vicariously through you,” Talbott says, laughing.

Talbott says he has broad support from other friends in the military, former teachers and his family. His grandmother Rhoda Dineen may be Talbott’s biggest fan. Her three brothers served. Dineen, 71, can’t understand why Trump doesn’t want her grandson.

“And he’s wasting time because eventually it will be,” Dineen says, “so why not let the good guys in while they’re young.”

Jennifer Levi, who is arguing Talbott’s case on behalf of GLBTQ Legal Advocates & Defenders, says she understands the caution but believes in the strength of the case against the ban.

“The preliminary decisions that have been issued now in four cases really support that confidence,” Levi says.

More motions are due Wednesday in Talbott’s case, before the federal district court in central California.