It’s almost graduation day, and students — an important part of NWPB — prepare to move on. Their time spent at NWPB is a resume builder and investment in their future. We wish them well as we say goodbye to Connor Henricksen, Kevin Vallene, Preston Snyder and Afiq Hisham. Here’s what they plan to do next. 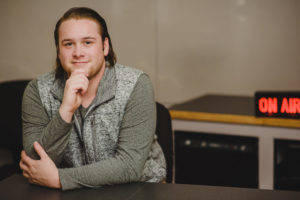 Connor Henricksen listened to NWPB his whole life, but gained new appreciation for the complexities of our operation once he began announcing here.

When Connor Henricksen came to NWPB in 2015, the lifelong listener couldn’t wait to find out the inner workings of the station – and on learning the sheer number of moving parts involved in our broadcast, he says it boggled his mind. Still, Connor eagerly took to announcing, editing, writing and producing, and became a regular announcer on weekends — eventually filling in on All Things Considered and Morning Edition. We also appreciated Connor bringing his experience as a wildland firefighter to bring new perspectives to NWPB’s wildfire coverage. He is moving back to Tacoma and plans to pursue his interests including photography, music — and someday, voice acting. 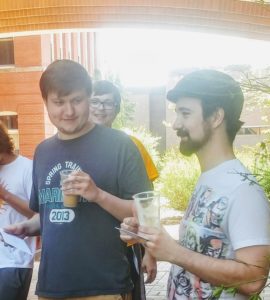 Kevin Vallene (left) and Preston Snyder announced on KJEM, and Kevin was also heard on NWPB on weekends.

Kevin Vallene has also enjoyed playing a part in some of the shows he listened to while growing up. As he looks back on all he’s learned at NWPB, he is more determined than ever to pursue a career in radio. Step one: This summer, Kevin will be the play-by-play voice of the Yakima Valley Pippins baseball team! Kevin is a huge sports fan, and we’re pretty sure we’ll be hearing him on all kinds of sports broadcasts in the future. Kevin announced on NWPB as well as on KJEM, where he was also the operations manager.

Saxophonist and jazz aficionado Preston Snyder hosted a weekly show on KJEM, and served as program manager – which meant he also trained staff and volunteers, and helped them to become more confident in radio. Preston enjoyed sharing his love of jazz with KJEM listeners, but his other interests have also led him to create a podcast that focuses on off-beat stories around the world. Preston is planning to work in marketing or management, and plans to keep an eye on KJEM’s continued progress and growth. 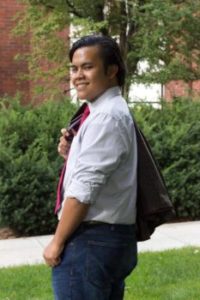 Afiq Hisham is heading for a long future in TV news.

Finally, if you’ve ever swooned over the soft yet authoritative news style of BBC reporters — and their great accents — listen and watch down the road for Afiq Hisham. He came to Pullman and NWPB most recently via Canada and Malaysia. Attending high school in Vancouver, British Columbia, he was exposed to the CBC and interacted with a high school journalism program through the Canadian public broadcasting system. He was hooked from there. He’s worked for two years as a news producer for morning and afternoon news shows, mostly behind the scenes of radio — and web stories — of what you’ve heard day in and day out. He’s a self-described news junkie and wants to pursue the next chapter of his post-graduation life in TV news reporting or producing. He also somehow found time to be the news director for WSU’s student-run station, KUGR (where a guy named … ahem … Keith Jackson got his start). As if that weren’t enough, he worked with the WSU student TV media production station, Cable 8.