Before there was an Oregon, Idaho and Washington state, there was the Oregon Country. Early settlers and pioneers voted to form a provisional territorial government 175 years ago this week.  The vote was close and featured arguments that may sound surprisingly familiar today.

The pivotal decision will be celebrated Saturday as Founders Day at the spot where it happened in Marion County.

In early May of 1843, a motley crowd of trappers, traders, missionaries and early farmers came by foot or horseback to a Hudson Bay Company warehouse along the Willamette River.

Champoeg State Heritage Park Chief Interpretive Ranger Dan Klug said that at the time the settlers convened, the Pacific Northwest was jointly occupied by the United States and Great Britain—and was largely ungoverned.

“With that vote for a provisional government—it was the first west of the Rocky Mountains—it aligned the Northwest with the United States and it really paved the way for westward expansion of the United States,” Klug said. “You remember this was prior to the gold rush in California in ’49.” 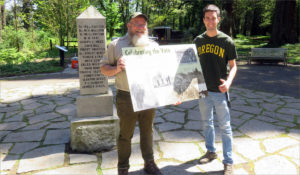 Klug said the 1843 vote also started the ball rolling for the admission of the State of Oregon into the union in 1859. Washington and Idaho achieved statehood later.

The amazing thing is we’re still arguing about a lot of the same things the founders of the territorial government were.

“It’s very much like it is today,” Klug said. “You have people who come out here and say, ‘I don’t need government.’ I don’t want to pay to taxes. Other people say we need to have roads, we need to have schools and we need to have a way to adjudicate our land claims.”

Klug said the outcome was an early example of how every vote counts. 102 men cast votes. Formation of a provisional government for the territory won 52 to 50.

The pioneers didn’t just dwell on philosophical questions about the nature of government and the need for it. Another key motivation for the settlers was protection of livestock from predators, including wolves.

Greg Leo is a history buff who lives near the state park. He’s also a lobbyist in Salem.

“Here we have the continuity of government,” Leo said. “175 years later, Marion County still has a trapper. We still at the Oregon Legislature are talking about wolves and wolf policy.”

“What we hear nowadays about law enforcement was really a lot of same kind of arguments that you’d hear. We need to have judges so that laws were not arbitrary—that they applied equally no matter who you were in society, so that it wasn’t just at the whim of a company,” Leo said in reference to the Hudson Bay Company, the area’s dominant commercial interest in that era.

Leo said it’s interesting that the founders talked about a current fixation—roads—because essentially there were no roads at the time.

“But there was the need for roads,” Leo said. “So one of the first things that the provisional government that was formed 175 years ago did was investigate building roads—in fact, did build a road down the Willamette Valley to Salem.” 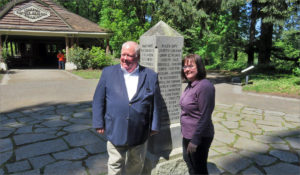 Greg and Rachel Leo pose beside the monument at the site of the historic vote at Champoeg, Oregon. CREDIT: TOM BANSE

You’ve heard sayings about people who are doomed to repeat their history. But to Leo, we’re witnessing heart-warming tradition.

“The more things change over 175 years, the more things are the same,” he said. “I think it has to do with our human nature, but also our practical sense of what do we expect out of government.”

Klug lands on a quote he attributes to Mark Twain, “History doesn’t repeat itself, but it rhymes.”

You can immerse yourself in all this through demonstrations, displays and a Founders Day anniversary ceremony at Champoeg State Heritage Area on Saturday.