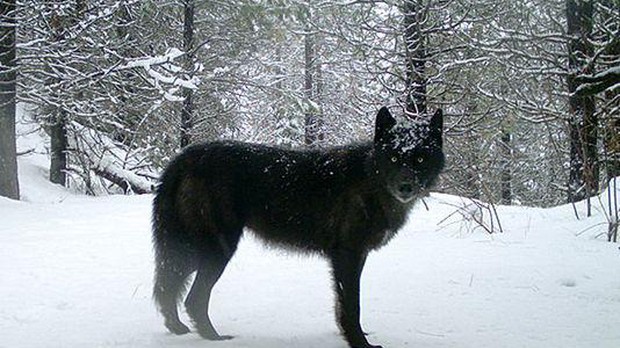 New genetic research on the Northwest’s wolves finds they descended from a mix of two different types — some from the northern Rocky Mountains and some from coastal rain forests. That means the packs that form in our region have more genetic diversity — a key to survival.

The idea for this research actually started out with Oregon’s famous wandering wolf, OR-7. When Sarah Hendricks studied wolf DNA in the wake of OR-7’s travels, she and other researchers realized there are two genetically different types of wolves. And that got her wondering about wolves in Washington and Oregon.

Coastal rain forest wolves are pretty different from what we typically think of in Washington and Oregon.

“They eat a lot more salmon, as opposed to ungulates, like deer or elk. They’re slightly smaller. They have a different coat coloration. They’re fairly distinct from wolves we find in the interior parts of North America,” Hendricks said.

The researchers were surprised to find DNA signatures from coastal populations show up in Washington.

“Most of the observational data indicates that individuals are coming from Idaho or Montana (which would be linked to northern Rocky Mountain DNA),” Hendricks said.

Hendricks, now a Ph.D. candidate at the University of Idaho, said it’s important for wolf packs to have genetic diversity.

“As populations and the environment changes in the future, it’s better to have a lot of genetic diversity so that the wolf populations can change as well,” she said.

Genetic diversity could be important as the climate changes, and wolves’ habitat and prey could be affected by increasing rain or temperatures.

Hendricks said it could also be important when people consider changes to public policy and species management. She said there needs to be more precise language for species with mixed DNA. For example, because of their mixed genes, these wolves are related to packs in Alaska — which could be important if wolves in Alaska are added to the Endangered Species List.