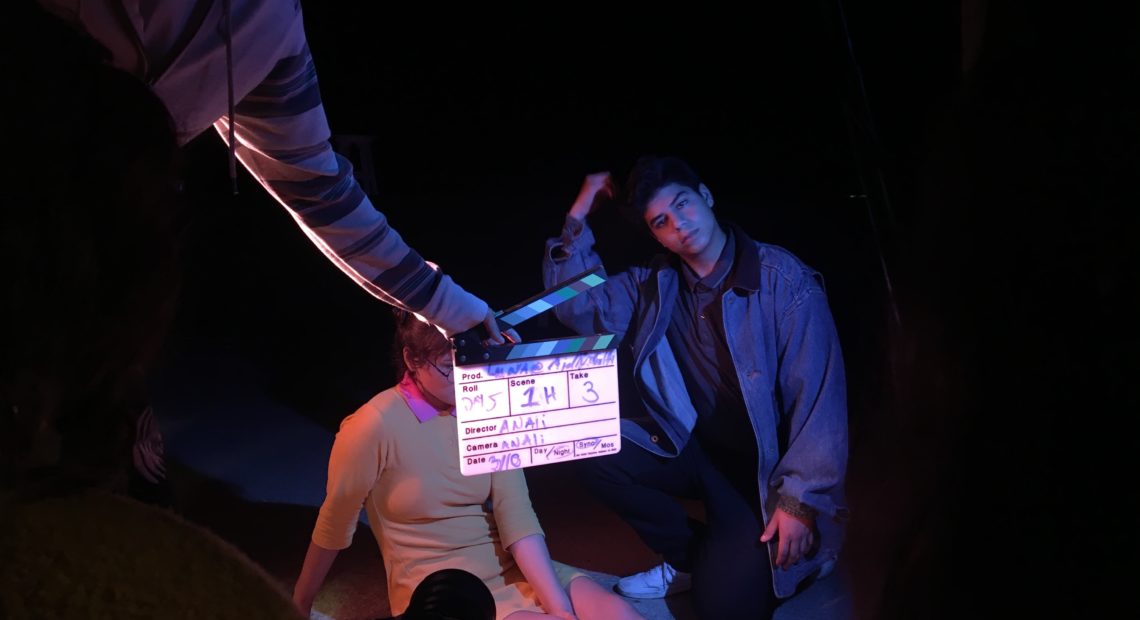 This story first aired June 26, 2018 on All Things Considered Weekend

At Union Avenue Elementary School in Los Angeles, a classroom of fifth grade students are buzzing during the last week of school.

The students are high-fiving, grabbing popcorn and forming a circle around a makeshift stage.

One of those students is Dylan Martinez — he’s here to celebrate a movie he made.

“My film is about a scared plumber,” Martinez says. “We pretty much put all the scripts together, all the screens together, went to the places where we filmed our scenes, and we edited, put music, looked for music, and that’s it!”

Martinez and his classmates are part of the Youth Cinema Project, a program devoted to teaching students of color, from fourth grade through high school, about filmmaking.

Since the start of the program at Union Avenue Elementary this past school year, Erika Sabel Flores, a mentor for the program who’s been placed with the school, says she’s noticed improvement in the students’ practical and social skills, like working together, staying organized, networking and speaking up in class.

“They have a voice, they’re more empowered and confident and they’re less shy,” Flores says. “This program is structured in a way where they are learning life skills.”

About twice a week, mentors like Flores take over classrooms for an hour at a time at schools in 16 districts across California. The program puts students into teams and the teams are expected to produce short films during the school year. They use tools like boom microphones and Blackmagic 4K video cameras to make the films, and professional software like DaVinci Resolve and Final Cut Pro to edit them.

The program’s executive director, Rafael Agustin, says these kids will someday help change the entertainment industry. He says they are the answer to the recent social media uproar over #OscarsSoWhite. The hashtag infamously began on Twitter in 2015, and took off again in 2016 when, for a second year in a row, all 20 actors nominated in the lead and supporting acting categories at the Academy Awards were white. 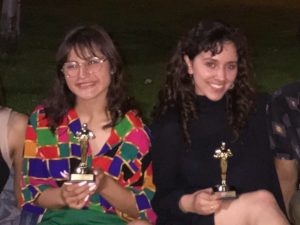 Actress Leonissa Duarte, 18, and director Anali Cabrera, 17, won an award from the Youth Cinema Project this year for completing their film, Luna at Moonlight.

Olmos founded the Youth Cinema Project in 2013 and appointed Agustin, a writer on The CW TV show Jane the Virgin, as executive director. According to Agustin, they’ve mentored more than 3,000 students in filmmaking since the program’s inception.

Agustin says what sets Youth Cinema Project apart from other pipeline programs is that, starting at a young age, the kids are doing all the work, as opposed to the adults. The participating school districts have conducted studies that show real results of teaching hands-on filmmaking.

“We started doubling reading and writing proficiency. Tripling school engagement,” Agustin says. “Creating social and emotional empowerment in the classroom by students writing and telling their own personal stories.”

What started out as a program to help kids graduate from high school and get into college turned into a fully realized pipeline for filmmakers of color.

Colleges are also getting on board to partner with the program. Chapman University in southern California recently gave 10 full scholarships to the Youth Cinema Project for students to study filmmaking at the university.

The program is crucial to solving the lack of diversity in Hollywood, says Ana-Christina Ramón, director of research and civic engagement for the Division of Social Sciences at UCLA and a co-author of the Hollywood Diversity Report every year. The report is widely read in the industry and measures diversity in front of and behind the camera.

“You have to start somewhere,” Ramón says. “And thinking about Hollywood and increasing the number of underrepresented minorities in the industry, you have to attack the problem from all different angles.”

Still, Ramón says there are challenges to success. She says skepticism about the profession of filmmaking is prominent in working-class neighborhoods where these students might come from in Los Angeles.

“It’s never really been a pool problem. You know, the excuse is always like, ‘Do they have enough experience?’ ” Ramón says. “But when you give kids the training they receive in this program, they have no excuse.”

Seventeen-year-old high school graduate and aspiring filmmaker Anali Cabrera is one of those kids in the pool. “I’ve wanted to be in films since I was about 11, so it’s always been a passion of mine,” Cabrera says.

The film she made for the Youth Cinema Project this year has a personal touch because it is set near her home in Los Angeles.

“I made a film called Luna at Moonlight,” Cabrera says. “It takes place at Moonlight Rollerway in Glendale. It’s about this girl who falls deeply in love with a guy at a rollerway. And she spends the next couple months roller skating around her neighborhood, trying to reunite with him.”

Cabrera spent five to six hours per week over the span of eight months, both in and outside of class, working on the movie.

Cabrera says she wouldn’t have been able to get into college without the program. She’s headed to the University of California, Los Angeles, in the fall to study filmmaking. She wants to make documentary films about social issues like sexual harassment.

“Not only do you build up your resume as you’re working on different films and projects, but they’re also giving you personal advice as college student alumni or workers within the film industry,” Cabrera says.

Hundreds of students including Cabrera piled into the historic TCL Chinese Theatre this past weekend to premiere their films at the Los Angeles Latino International Film Festival.

Cabrera said she was grateful for the program giving her the opportunity to screen her film.

“I’m honestly in awe,” Cabrera said. “I’m excited to be with my friends and to be with my cast and crew and I’m most looking forward to everyone seeing [my movie] and being able to see their reactions.”