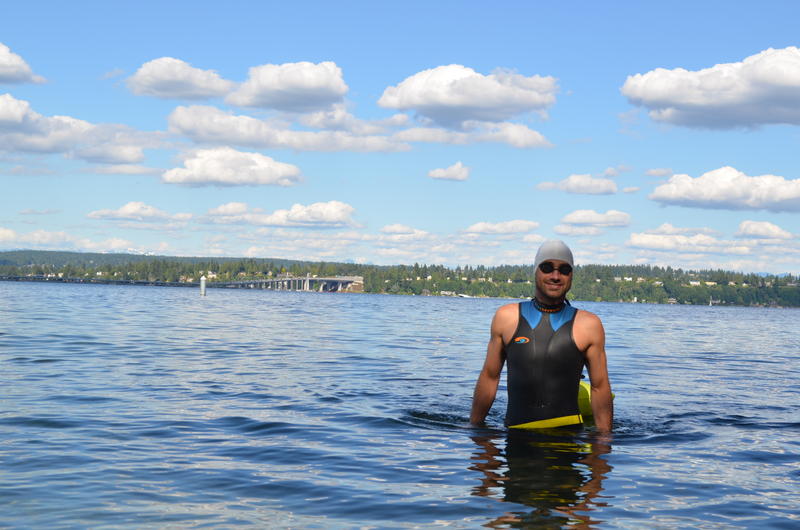 What’s Up With The Algae Blooms In Northwest Lakes?

“Where I was from — Moscow, Idaho — there’s not a lot of lakes to swim. And so being here was like, ‘Oh my God, there’s all these lakes I can swim in!’” Ludwig said.
“Once you have that, going back to an indoor pool is like, ‘Hm, I don’t really like this as much’.

But, then, in 2003, Ludwig had a summer job as a Green Lake lifeguard, and the lake closed because of a toxic algae bloom.

“It was like pea soup,” Ludwig said. “We were still doing lifeguarding drills out in the water, and I remember it just looking like Star Wars when you’re swimming through it, because it’s just all the stars like on warp mode going past your goggles — but it was algae. It was pretty messy.”

With climate change, situations like this are becoming increasingly common. For weeks, the residents of Salem, Oregon, couldn’t drink the water in their taps. The same thing has happened more than once to the people who live by Summit Lake near Olympia.

In both cases, a toxic algae bloom was to blame. That made Ludwig curious: Are Washington lakes safe to swim in? He wrote in to ask.

To answer Ludwig’s question, the first person I talked to was Lizbeth Seebacher, who’s in charge of the state’s freshwater algae program. I asked her if she would swim in Washington’s lakes.

“It would really depend on the lake,” she told me, “because I know more now about what has gone into some of these lakes, and that’s concerning.” 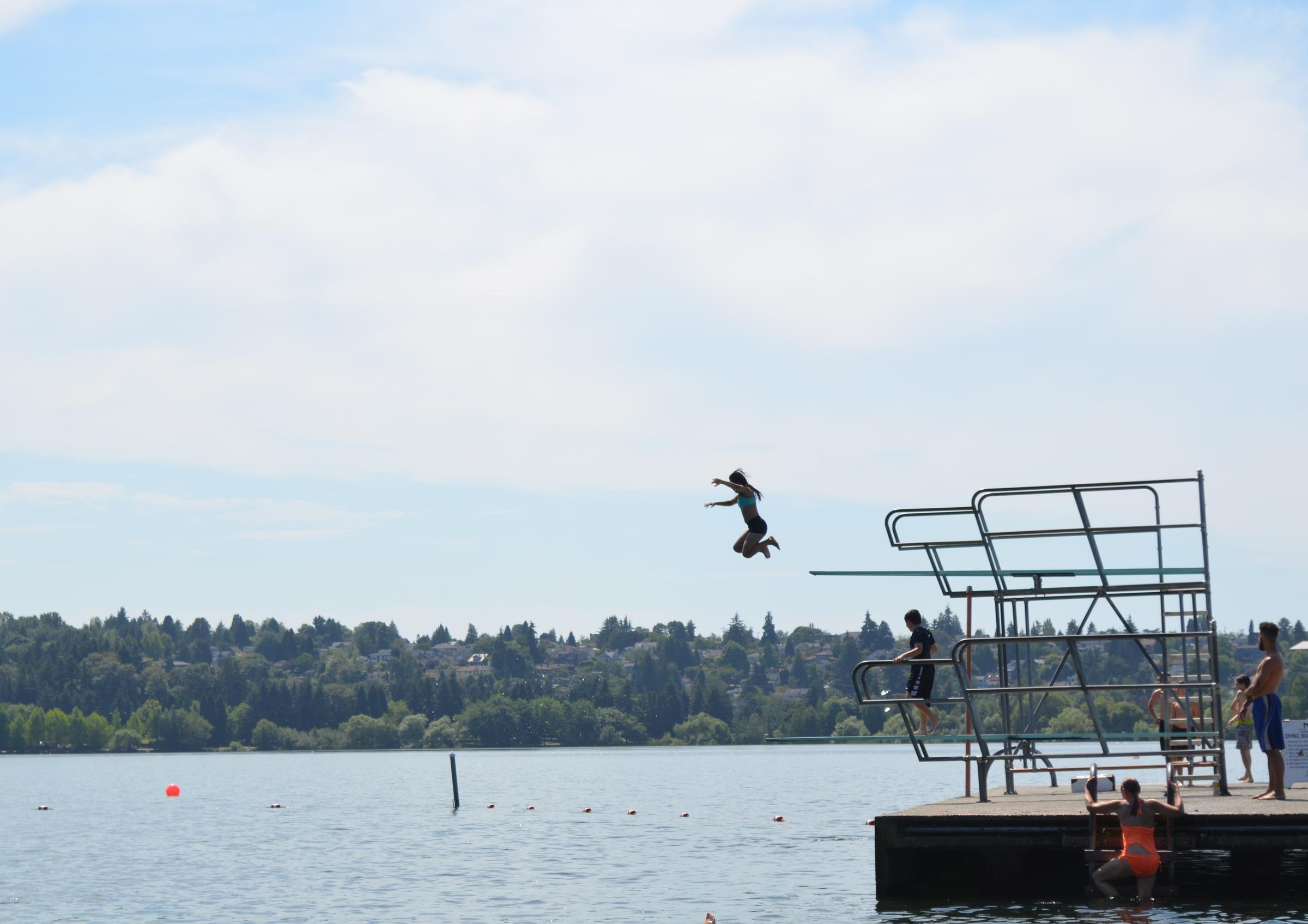 A girl jumps off the Green Lake diving board on a hot summer day. CREDIT: EILIS O’NEILL

Seebacher told me what we know as toxic algae blooms are actually something called cyanobacteria. These blooms are becoming more common and more toxic.
That’s in part because of climate change: Cyanobacteria thrive in warm water and sunny days.

Our region’s booming growth is also part of the problem. More overuse of fertilizers, pet waste, leaky septic tanks, people feeding ducks and geese — all give cyanobacteria the nutrients it needs to grow.

Not all lakes get cyanobacteria blooms, and not all cyanobacteria blooms are toxic. If the water looks like it has blue or green algae growing it it, it’s best to check with an expert or with the King County swim beach testing program before jumping in.

The two most common toxins produced by some kinds of cyanobacteria are a liver toxin and a neurotoxin, said Jane Mountjoy-Venning with the Washington Department of Public Health.

The neurotoxin is what shut down tap water in Salem and Olympia’s Summit Lake.
“You can have nausea,” Mountjoy-Venning said. “You can have numbness, particularly lips or kind of extremities, headaches. With a high enough dose it can actually kill you. We have had dogs in Washington state that were probably killed by a toxic algae bloom.”

Those are the immediate symptoms. As far as long-term health effects go, Mountjoy-Venning said, “It’s a bit challenging because there aren’t a whole lot of studies, so the real answer is we don’t really know.”

Of course, toxins aren’t the only thing to worry about.

One of the reasons Seebacher avoids swimming in Seattle’s lakes is because of the city’s many combined sewer overflows, which dump raw sewage along with storm water into lakes after heavy rainstorms. (The swim beach testing program checks for fecal coliform and E. coli as well as toxins.)

There’s also the risk of drowning or hypothermia, though, despite the recent kayaker death in Green Lake, those remain rare. 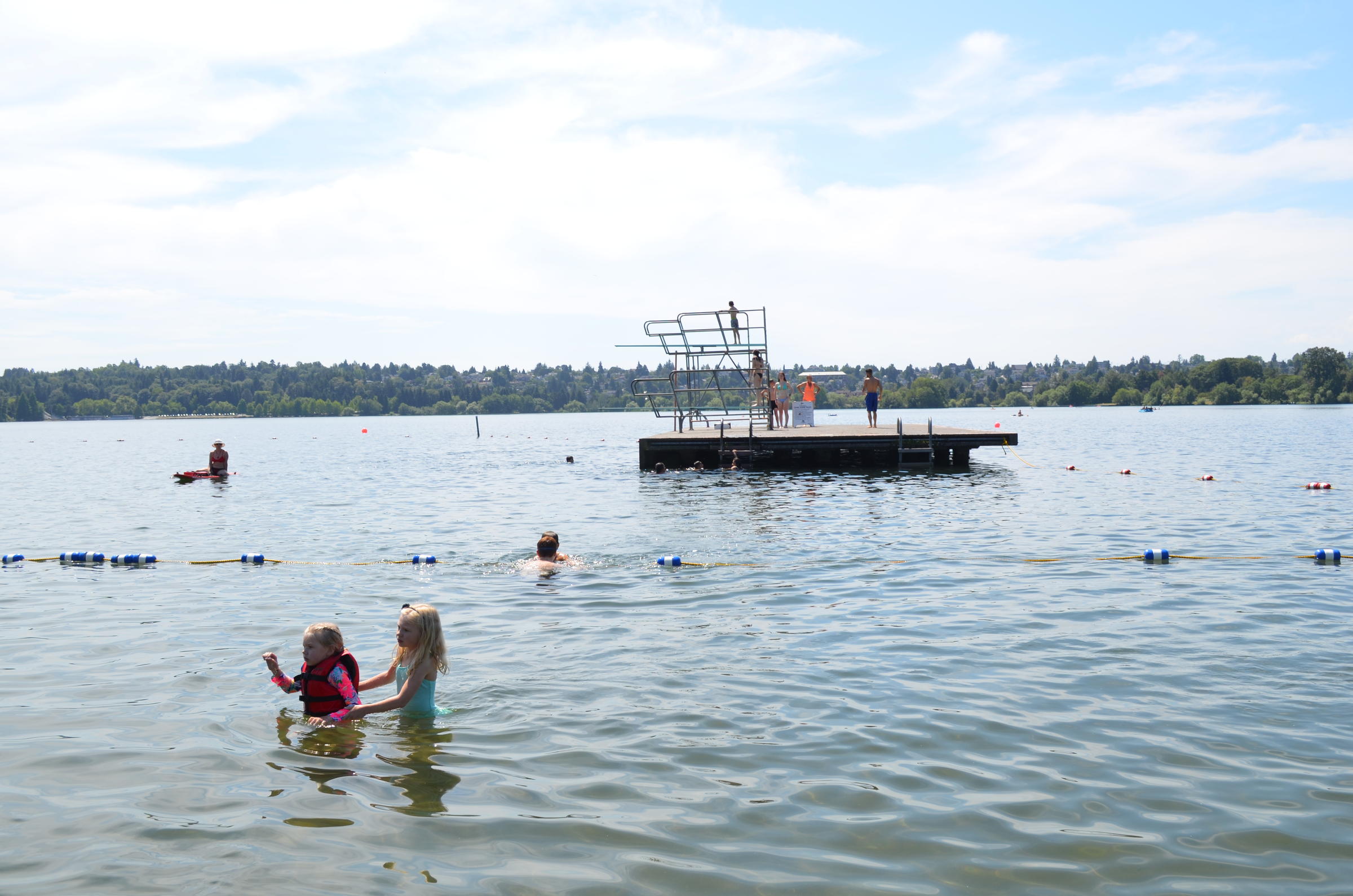 Swimmer’s itch is more common. That’s caused by a parasite burrowing into a swimmer’s skin. Sunscreening before swimming and drying off immediately after getting out of the water can help reduce that risk.

None of that — toxins, bacteria, or parasites — keeps Mountjoy-Venning out of the water.

“I do swim in lakes, pretty much most lakes, when I get a chance,” she said. “I love to swim. Swimming is a great exercise, so everybody has to balance that risk that they’re willing to take.”

So, at the end of the day, whether or not it’s safe to swim in any lake comes down to a personal risk assessment.

The day I interviewed him, former lifeguard Ludwig took the plunge in Lake Washington and swam from Madison Park Beach south to Denny Blaine.

“Swimming’s just sort of part of me,” he said. “I’m a pretty high-strung person, and swimming just makes you feel a lot more relaxed, and it’s just so tactile and physical you can’t help but get yourself out of your head.” 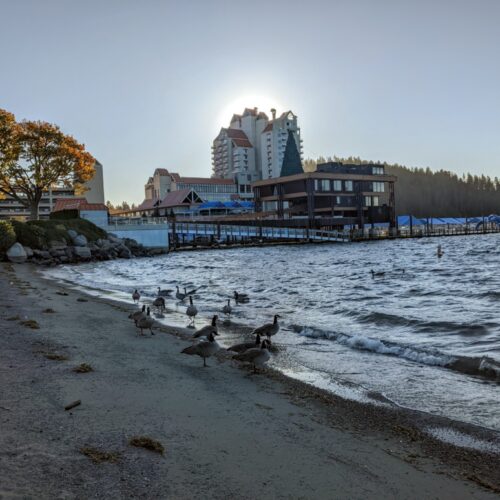