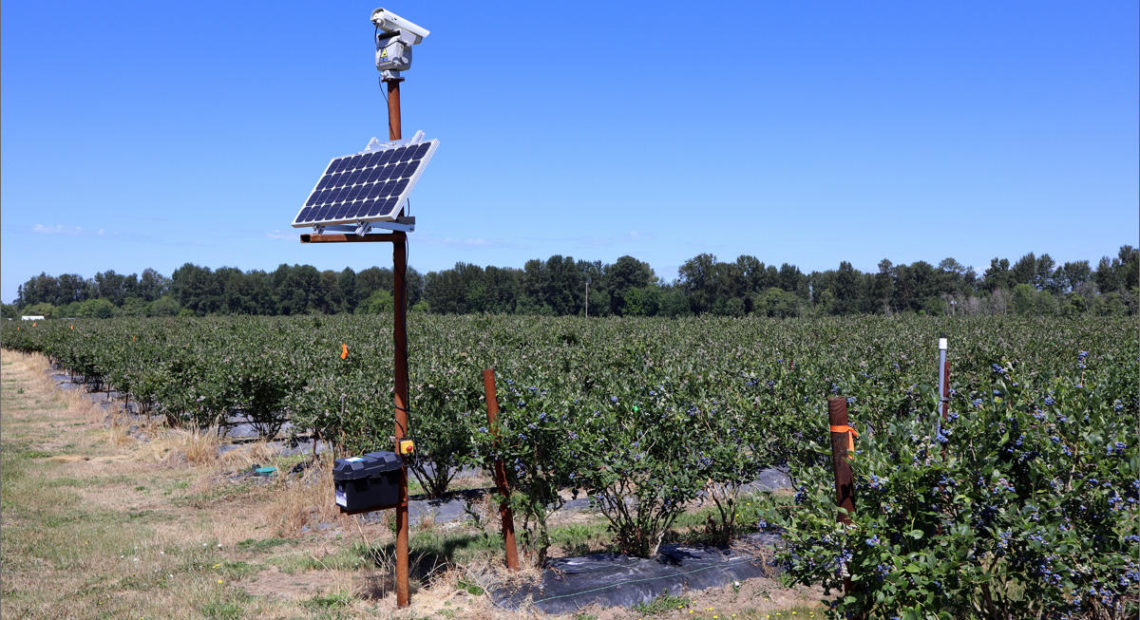 During every berry picking season in the Pacific Northwest, blueberry and raspberry growers fight to prevent birds from gobbling up the crop before they can harvest it. This year, some farmers are trying something new and high tech to scare away the thieving birds. 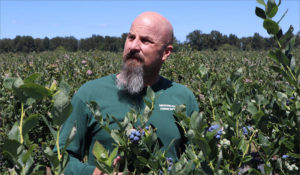 Orchard manager Justin Meduri is thrilled with the results of the laser system protecting his crop. CREDIT: TOM BANSE

The starlings gorge themselves and knock down berries right as the crop is ready to pick. When he failed to take countermeasures, Meduri said the damage could be “inconceivable, huge.”

Meduri said he previously hired a falconer to protect his fields. But the falcons were expensive, temperamental and sometimes flew away. Then last year, he became one of the first farmers in the U.S. to install automated lasers.

“You’re creating this kind of laser light show at 4 o’clock in the morning,” Meduri said. “That’s the time when birds come out.”

He said it looks like a laser light show because the lasers cross over in erratic patterns. The sweeping green laser beams emanate from what look like security cameras atop metal poles.

They even work during the daytime. But in broad sunlight, the human eye can only see green dots dancing across the berry-laden bushes. 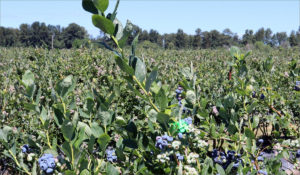 In broad daylight, the laser beam in not visible to the human eye, but you can see this green dot skitter across the berry-laden bushes. CREDIT: TOM BANSE

Meduri is thrilled with the results.

“They’re (the lasers are) running right now as we speak. You’re out here in over 175 acres of blueberries,” he said, punctuating the observation with a stacatto of hand claps. “There’s not one bird that you see flying around.”

Meduri said that had any birds been in the bushes, the clapping would have made them come out.

A Netherlands-based company called Bird Control Group made the six lasers that Meduri first rented, then bought. The company’s director of North American business development is Wayne Ackermann, who’s based in the Portland area.

Ackermann said the lasers are catching on.

“In the Northwest, the applications we have sold them for so far have been blueberry growers, cherry growers, vineyards, some honey crisp (apples) and we’ve got one going in on top of a grocery store in the greater Seattle market,” Ackermann said. 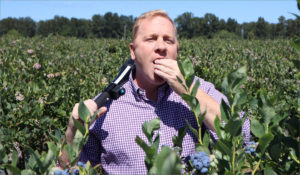 Wayne Ackermann is Bird Control Group’s director of business development for North America. His company made the six lasers that Justin Meduri uses on his fields and orchards. CREDIT: TOM BANSE

Bird Control Group got started in Europe using lasers to shoo pesky birds away from industrial sites and airports, for the most part. In the U.S. market, agricultural applications appear to be the most promising.

Ackermann says some of his initial sales have come from farmers trying to appease neighbors.

“One grower in eastern Washington was the first to bring this to my attention,” Ackermann said. “He’s a cherry grower and he said he was having a combative relationship with one of his neighbors.”

The silent lasers proved a friendlier—and sometimes better—bird repellant than traditional tools such as propane cannons or squawk boxes. Friendlier than using poison or a 12-gauge shotgun as well.

One automated laser unit costs about $9,500, which Ackerman said qualifies as “affordable” for commercial farms.

The company offers free laser safety training. That’s important because lasers can burn your eyes if you look into them. It’s the same danger as pilots being blinded by irresponsible people aiming laser pointers into the sky.

Bird Control Group says it programs its automated lasers to always shine the beam downward. It also recommends that fields be posted with signs to keep strangers out when lasers are in use.

Researchers at Purdue University are leading an independent study into the risk of injury to the birds. Principal investigator Esteban Fernandez-Juricic said very little is known about whether lasers can fry the retinas in animal eyes.

“What we are trying to assess is whether different levels of energy output of these lasers and different levels of exposure time could cause any kind of retinal injury on the animal,” Fernandez-Juricic said. “These retinal injuries could potentially be pretty serious and affect the ability of the animal to see and consequently to find food, or mates or find refuge and so forth.”

Fernandez-Juricic said he hopes to release preliminary results in three to six months. He added his team has gotten “interesting results,” but the data needs to undergo peer review before public release.

The two-to-three year study received primary funding from the National Fish and Wildlife Foundation with additional money coming from the Packard Foundation.

A marine scientist from Seattle encouraged and supported Fernandez-Juricic to tackle safety and efficacy questions. Washington Sea Grant’s Ed Melvin said in an interview that his interest stemmed from an experimental deployment of a laser unit on a commercial fishing boat off the Oregon coast.

Melvin said fishing vessel owners were curious if laser beams could deter deadly seabird interactions with fishing gear. He raised a complication, the risk of retinal injury to protected species such as the endangered short-tail albatross. The initial trial with two onboard lasers in 2015 found wide variation in seabird responsedepending on species and time of day.

“The jury is out whether, and to what extent, this is effective,” said Melvin on Thursday.

Ackermann said birds perceive a laser beam differently than humans, probably seeing it as a physical danger coming at them.

“It’s like someone waving a stick in your face,” Ackerman said. “At some point, you’re going to say, ‘I’m not welcome here and I’m going to leave.'”

Ackermann described a rapid growth curve for the business in North America starting from 20-25 laser units being deployed on farms last year, rising to about 100 this growing season. Next year, he anticipates selling 300 or more lasers for bird deterrence, including expansion into the new sectors.

Washington has become the largest blueberry producing state in the nation. In 2016 Washington’s total harvest came in at 120 million pounds and projections show it may reach 145 million this year.