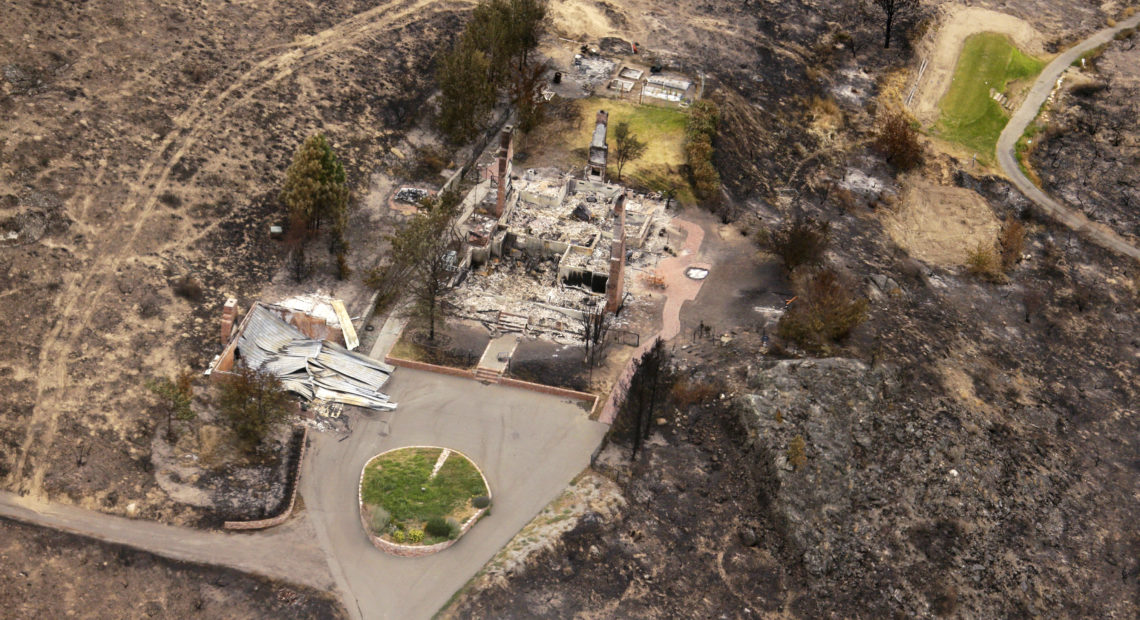 Four Years After Carlton Complex Devastated Okanogan County, What Have We Learned?

Chris Hopkins moved to Pine Forest for the trees. He was drawn to the hilly, forested community in Washington’s Methow Valley, and decided to build a cabin there in the 1990s, “before we really knew about fire danger,” he said. 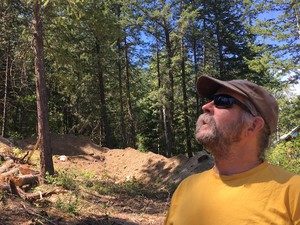 Chris Hopkins built a home in Pine Forest in the 1990s and lived there for more than a decade. He says it’s the responsibility of individual property owners to protect their homes from wildfire. CREDIT: ASHLEY AHEARN

“We had spent most of the day clearing brush but it wasn’t enough,” Hopkins recalled. His brother and sister-in-law had lost power and were in their home with the shades drawn to stay cool when they heard a knock on the door. It was someone from the Forest Service telling them they needed to evacuate immediately. “Sure enough there was a 30-foot wall of flames heading towards them,” Hopkins said.

For people like Hopkins and his brother, whose homes straddle what’s called the “wildland-urban interface,” wildfire risk is the new normal, and the risk is increasing as more people move into places where cul-de-sac meets forest or sagebrush.

ALL FOR ONE, ONE FOR ALL

Heather Dean knows everyone in Pine Forest. She and her husband walk their two dogs twice a day along the dirt roads that weave through the forest. In the winter they snowshoe and cross-country ski on the extensive trail system that connects Pine Forest with surrounding Forest Service land.

Wildfire has always been a part of this dry, forested landscape — as it has in many parts of the West — but as more people have moved in the wildland-urban interface over the past century, federal and state agencies have aggressively suppressed fires that would have otherwise burned at lower intensity and cleared out the underbrush that builds up in a forest over time.

“Our biggest problem is that the forest has largely been left to its own for a good chunk of the time that Pine Forest has been here and it’s gotten too overgrown,” Dean explained.

Now, when Dean walks through Pine Forest she sees too many trees, too close together with too much undergrowth. The recommended density of this forest is 25–30 trees per acre, according to forestry health experts Dean consulted. On some plots in Pine Forest that number is closer to 600. That’s a lot more fuel to burn.

But she and others in the community are working to do something about it. Pine Forest residents now pay $350 more in homeowners association dues to cover the cost of thinning the trees in the common areas and along shared roads. The homeowners association contracted with a logging company to give individual property owners the option of paying out of pocket to have extra thinning done on their property if they choose. Dean said that when she bumps into her neighbors on her frequent walks she’s been heartened by their response.

“A lot of people think, I can do this all myself, but then they realize it’s really a lot of work,” she said. “We are much more likely to get it done if we band together and do it.” 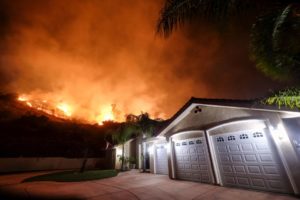 Dean said that 60 percent of the 135 lots in Pine Forest have now been thinned. “If you can get 60 to 75 percent participation you’ve made a significant reduction in your risk of a large fire, so we’re hopeful.”

That risk remains, of course, but by taking the “all for one, one for all” approach, as Dean calls it, the Pine Forest community has reduced its risk. Fire resilience is a team effort, if you ask wildfire scientists. An individual homeowner can do everything correctly on his or her property, but if a neighbor’s lot has a dense, overgrown forest, a fire can intensify and spread across the tree canopy to destroy even the best-protected homes nearby.

Since 1990, more than 60 percent of new homes in California, Oregon and Washington were built in the wildland-urban interface (WUI). Washington has more homes in the WUI than any other state, according to Headwaters Economics. The National Academy of Public Administration predicts a 40 percent increase in homes in the WUI between 2001 and 2030.

Fire destroyed an average of 3,000 homes in the wildland-urban interface annually over the last decade, according the Federal Emergency Management Administration. And with hotter, drier summers and a longer fire season, experts predict that number to rise.

Despite the risk, across much of the rural West, local governments and planning departments are hesitant to prevent or hamper development.

“I’m not real big on over-regulating people,” said Andy Hover, an Okanogan County commissioner who lives near Pine Forest in the Methow Valley. “You would hope that people, when they buy a piece of property, that they understand what they’re doing when they buy that property.”

Hover said it’s the responsibility of each individual homeowner, not the entire community, to protect his or her property from fire risk. And it’s not necessarily the job of the county to tell people where and how they develop their property, in light of that risk.

“Rules and regulations are kind of like — well, is that really what we want? It’s a little more tricky to lay out policy that everybody can get behind,” Hover said.

Okanogan County released an updated comprehensive plan — its plan for managing population and business growth — soon after the Carlton Complex fire. There was no mention of wildfire in the document. A revised draft plan makes mention of wildfire risk but does not provide specific guidance on imposing building requirements or prohibiting development in wildfire-prone areas. Hover was not a commissioner when the plan was developed. 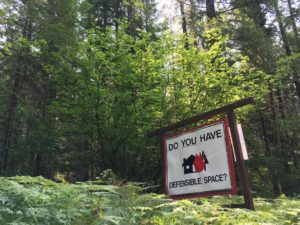 A roadside reminder in southwest Washington’s Gifford Pinchot National Forest that homes in the “wildlands urban interface” need special landscaping, building materials and maintenance to reduce the risk of being destroyed by a wildfire.
CREDIT: CASSANDRA PROFITA /OPB

In cash-strapped counties like Okanogan that once depended on logging or mining for jobs and tax revenue, home construction is a major economic and tax revenue driver.

“There’s a whole new cash cow in a lot of communities and that’s residential development,” said Ray Rasker, executive director of Headwaters Economics. “So when they see a proposal for a new subdivision it’s understandable for county governments to say, eagerly, ‘Let’s approve this because we get more tax revenues from that.’”

Headwaters Economics has worked with local governments across the country to provide guidance on building codes and community planning to improve wildfire resilience.

Rasker said this is not about halting development because of a perceived risk. It’s about incorporating the growing body of information about wildfire behavior into development practices. “The science is there, the knowledge is there, to know how to do it better than we have in the past,” Rasker said. “We can’t guarantee that you can 100 percent make a place fireproof but for the most part, in much of the West, you really can say yes to development — but under certain conditions.”

Last year Amy Snover and her family walked every corner of her property in Pine Forest, tying ribbons around trees to be cut down. She remembers the fir tree along the walkway where they’d hang their bikes to tune them up after a ride, or the ponderosa pines that grew up through the deck.

“We would sit out there under the tree canopy and sometimes sleep on the deck and watch the birds flying in and out of the trees,” Snover recalled. Every decision to cut was painful, but she knew it was necessary. And Snover knows more about wildfire and climate-change risks than most. She is the director of the Climate Impacts Group at the University of Washington. 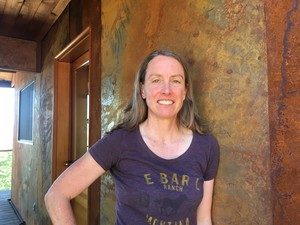 Amy Snover, director of the Climate Impacts Group at the University of Washington, stands outside her family’s cabin in Pine Forest. She replaced the wood siding on the house with metal siding to improve fire resistance and participated in community tree-thinning efforts. CREDIT: ASHLEY AHEARN

“I’m taking my baby steps and trying to push myself as much as I can,” she said, chuckling at herself. “I think that because I spend all day, every day, thinking about what climate change means for this region and that we have some amount of inevitable change and we need to make choices accordingly —”

She paused, her shoulders slumped. “They’re not easy choices so it’s interesting to be living through that and watch that tension and challenge in myself.”

Snover said there is no guarantee that spending hundreds or thousands of dollars thinning trees, upgrading deck materials or swapping out a shingle roof for a metal roof will immunize a home to wildfire — just as there’s no guarantee that instituting a carbon tax or buying carbon offsets or driving an electric car will solve climate change.

“This is what we as a society are wrestling with in all areas of climate change,” she said. “It’s pretty depressing and feels insurmountable and you think, I’m a little plot of land in the midst of a big forest — nothing I do matters. I always turn it around and say, ‘The only thing that matters is what you do.’”

Joseph Winters of Oregon Public Broadcasting contributed to this story.

Reporting was supported by the Institute for Journalism and Natural Resources.

About this story: We want to be transparent about how we reported this. Click here to learn more. 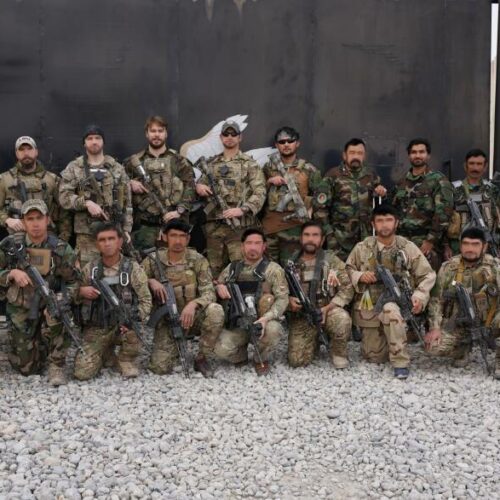 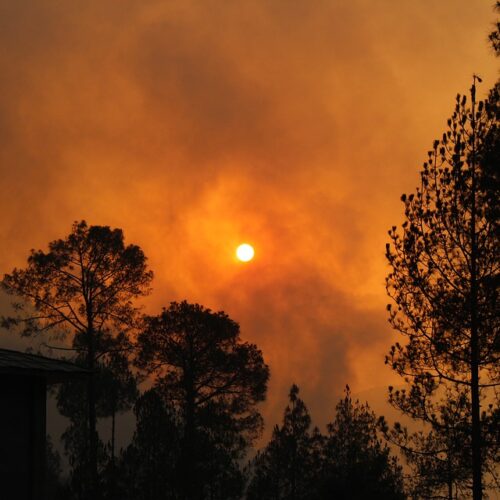