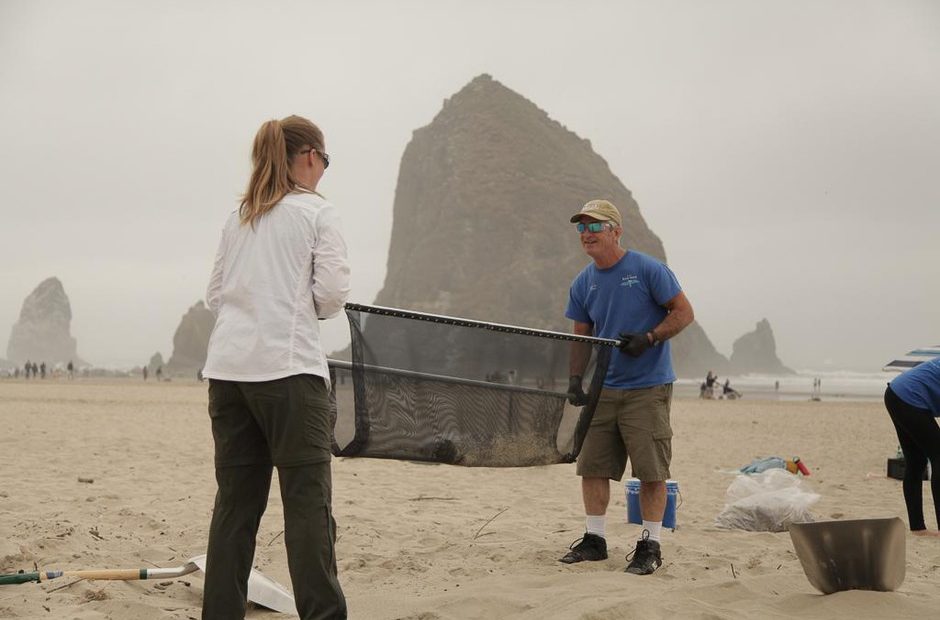 How To Clean Sand: Volunteers Take On Microplastics At Oregon’s Iconic Haystack Rock

How do you clean all the sand on a beach? A group of volunteers didn’t do it grain by grain, but took on the task screen by screen.

Developed by Sea Turtles Forever founder Marc W. Ward, the systems look like a cross between a medical stretcher and a flour sifter. Dirty sand is piled on a sheet of fine mesh stretched between two long poles, and the mesh catches plastic and other foreign material while allowing the sand to fall through. According to Ward, a static charge in the mesh can catch plastic particles as small as 100 micrometers across.

The result? An area of silky, pure sand free of plastic litter — especially the tiny bits that pose a threat to wildlife.

Plastic materials that enter the marine environment slowly break down after prolonged outdoor exposure. These broken down fragments — called microplastics — form a soupy jumble of small plastic particles at sea, which make landfall after being caught in currents.

Plastics in the ocean and on the beach can be very destructive to the marine ecosystem. Animals can mistake small, often colorful microplastics for food. This can lead to the introduction of toxic chemicals to the animal and has been known to lead to digestive blockage in fish, seabirds and turtles. Microplastics have been found in shellfish, left behind after the filter feeders draw in and expel contaminated water.

Microplastics continue to present environmental hazards after they are washed onto shore.

Researchers at the Marine Biology and Ecology Research Centre in the United Kingdom have identified the capacity for certain plastics to carry pollutants, including PCBs and DDT. These chemicals have been tied to neurological defects in children.

While some microplastics come from ships and the commercial fishing industry, a 2016 report from the Environmental Protection Agency states that marine plastic pollution comes primarily from sources on land — not just drink lids littered in beach towns, but shopping bags, straws and other discarded plastic waste that made it into the trash but escaped from garbage trucks or landfills.

Cannon Beach Mayor Sam Steidel, who attended at the cleanup, emphasized the need to reduce the use of throwaway plastic in the first place. “Cannon Beach is very environmentally conscious,” Steidel said. “To get the message out, people need to be aware of what we’re doing to our environment through the excessive use of plastic.”

After about four hours, Ward and his 50 volunteers had removed about 80 pounds of plastic from a 100-by-18 meter section of beach (picture a one-third strip of the length of a football field). With millions of tons of plastics reaching the world’s beaches each year, Ward acknowledged that the outlook is bleak.

“We’re in trouble,” Ward said, gesturing toward the sea. “Maybe not this year or next year, but 10 to 20 years down the line, we’re facing some catastrophic results here from this issue in the ocean.”

Even so, Ward says he’s not discouraged. His filtration systems are for sale and have been shipping all over the world. He’s organized cleanups in Long Beach, the Bay Area, Oregon and elsewhere, and regularly sees large volunteer turnouts.

“It’s really heartwarming to see so many people wanting to be part of the solution,” Ward said. “There has to be some response. We can’t just ignore it. We won’t ignore it.”