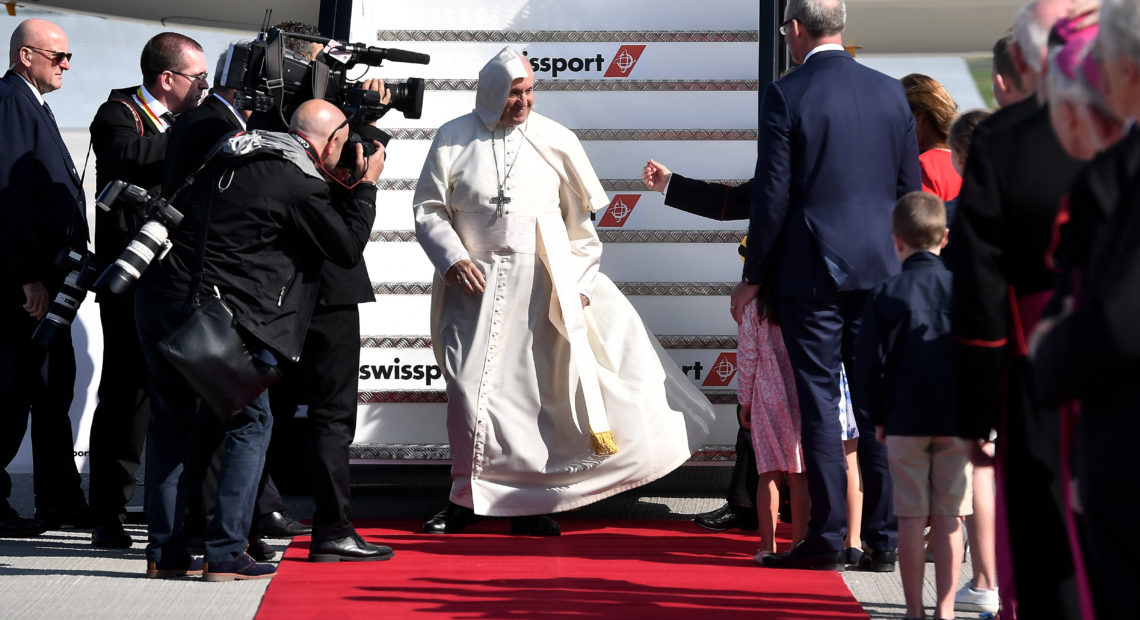 PHOTO: Pope Francis arrived at Dublin Airport on Saturday, the first visit by a Pope since John Paul II’s in 1979. He is expected to have private meetings with victims of sexual abuse by Catholic clergy. CREDIT: Charles McQuillan/Getty Images

Pope Francis landed in Dublin on Saturday, his visit eclipsed by the latest sex abuse scandal that touched at least a thousand people in Pennsylvania and opened wounds in Ireland.

As he disembarked from the plane, the pope was greeted by Ireland’s Deputy Premier and Foreign Affairs Minister Simon Coveney, his wife and their three daughters. One of the girls then presented Pope Francis with a bouquet of flowers.

Some houses in Ireland’s capital were festooned with papal decorations, and people put deck chairs on the sidewalks in the hopes of spotting the pontiff in the white robe.

But his two-day trip comes at a time when the Catholic church’s influence in the country is waning: Mass attendance has diminished. Abortion, divorce and gay marriage are now legal.

Taoiseach Leo Varadkar, Ireland’s openly gay prime minister, told a crowd of dignitaries and lawmakers at Dublin Castle, “Wounds are still open and there is much to be done to bring about justice and truth and healing for victims and survivors.”

The pope took to the podium to speak of the most vulnerable. “I cannot fail to acknowledge the grave scandal caused in Ireland by the abuse of young people by members of the church charged with the responsibility of their protection and education,” he said, as translated by RTE News.

The failure to address “repellent crimes” — children who were forcibly taken from unwed mothers or abused by protected priests — remains “a source of pain and shame for the Catholic community.”

The Vatican said that the pope will have a private meeting with survivors of abuse later on Saturday.

The pope’s visit follows a letter he issued on Monday in which he vowed to prevent more cover-ups in the church. It was the first-ever papal letter to address clerical sex abuse for all followers of the Catholic faith.

The country has not forgotten the church’s history of abuses.

“It’s far too late to reverse the decline and the damage that has been done, the scale and enormity of what came out of Pennsylvania in particular in recent weeks mean that the run up to this visit was inevitably dominated by the child abuse issue,” Diarmaid Ferriter, a modern Irish history professor at University College Dublin, told NPR’s Frank Langfitt.

Lisa Breslin, an Irish activist who started a campaign called “Say Nope to the Pope,” told NPR, “We’re at a crucial time in Ireland. This is not just about abuse cases, but it’s years and generations of torture, neglect and murder by this church.”

Varadkar later said in a tweet that he hopes the pope’s visit can open a new chapter in the relationship between Ireland and the church. “Building on our intertwined history & learning from shared mistakes, it can be one in which religion is no longer at the centre of our society, but in which it still has an important place.”

Pope John Paul II was the last pontiff to visit Ireland, in 1979. Though Francis will celebrate mass for hundreds of thousands at Dublin’s Phoenix Park on Sunday, he arrives to a different Ireland.

Across the city, thousands are expected to protest in solidarity with people who were abused by the church.