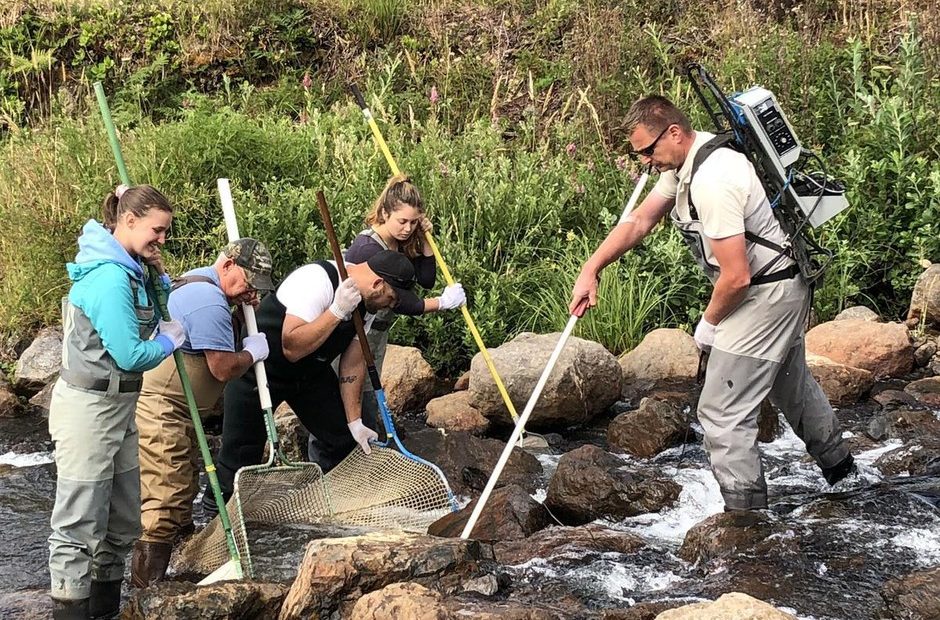 Lamprey populations across the Pacific Northwest have fallen in the past half century. An Oregon State University estimate says they are at 5 to 10 percent of their numbers half a century ago. Conservation officials and Native American tribes say this is troubling because of lampreys’ importance to the ecosystem. Now an effort is underway to monitor the numbers of these eel-like fish in southern coastal Oregon, to help researchers learn about their migration patterns and challenges.

In Eel Creek, just north of Coos Bay about a dozen people with waders and nets scan the water. One man holds a prod, attached to a large device on his back, making him look more like one of the “Ghostbusters” than a researcher.

“No! He’s not from Ghostbusters! That’s an electro-shocker.”

Mike Mader is Watershed Coordinator for the Tenmile Lakes Basin Partnership. Along with the Oregon Department of Fish and Wildlife, and the Confederated Tribes of the Coos, Lower Umpqua, and Siuslaw Indians, they’re embarking on a three-year project to stun, tag and monitor Pacific Lampreys.

While these parasitic fish have remained largely unchanged for 450 million years, Mader concedes they remain a mystery.

“This is real science, we’re just starting to learn about this species,” says Mader. “Currently, I don’t even know if we can tell a male and a female from’em now.

“And this is our first tagging. We’re doing a lot of firsts, here.”

With their tube-like bodies, gaping gill slits, and especially their sucker-like mouths lined with jagged teeth, lampreys aren’t the most aesthetically pleasing creatures. They look like they jumped out of a Ridley Scott sci-fi horror film.

Ben Clemens, Statewide Lamprey Coordinator for the Department of Fish and Wildlife adds they have a bad rep. In the Great Lakes of the Upper Midwest, they’re a big problem.

“They’re invasive, and they’re decimating the native fish (and) fauna there,” Clemens says. “There’s no evidence of native lamprey doing that here in the Pacific Northwest.”

A volunteer approaches Clemens with a freshly caught lamprey.

“Just cover their head, and let them put their mouth on your thumb, and carry them just like a baby,” advises Clemens. 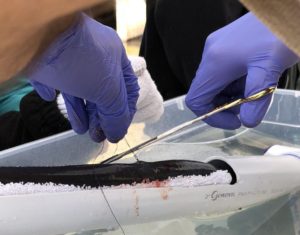 In a tent next to Eel Creek, Clemens and other biologists run a field hospital of sorts. Stunned lamprey are placed in tanks filled with a special anesthetic that makes them sleep.

“Length is 435,” says a volunteer, stretching the lamprey out on a table.

While out, each lamprey is measured, weighed, photographed and tagged. Then Clemens becomes a surgeon.

The glistening, brownish-green fish is laid out on a small platform, wrapped in a towel. Clemens goes to work as a group of volunteers watch on.

“What I did was made an incision, insert the radio tag, put out the whip antenna, and sutured it up with a couple sutures,” he explains.

Perched on a nearby slope Doc Slyter of the Confederated Tribes plays a song on his flute. He says many tribes still catch and eat lamprey, something he considers even tastier than salmon when smoked.

Slyter says they’re also an important indicator species, likening them to the proverbial canary in a coal mine.

“When the canary goes dead, you better be figuring out what’s going on. If they’re disappearing, what are we doing wrong?” Slyter tells KLCC.

“Y’know, is it chemicals coming from the forest that we spray or is it food in the ocean? Or a combination of all, probably. But they used to thick when I was a kid, and you could walk the waterways where I used to see hundreds of them, and now you only see one or two bodies.”

So far this year, nearly 30 lamprey have been tagged.  The Oregon Watershed Enhancement Board has provided $56,000 in grants toward the venture’s first year. Roughly $30,000 more have been given in time and materials by project partners.

Deemed by conservation groups as a “species of concern”, it’s hoped that lamprey tracking will show migration patterns and challenges they face…to help bring lamprey numbers back up.

“We saw a recent increase over the last couple years with lamprey in the Umatilla River,” says Aaron Jackson, Lamprey Project Leader

Aaron Jackson is Lamprey Project Leader for the Confederated Tribes of the Umatilla Indian Reservation.  He says after decades of state agencies targeting the fish for removal, the tribe, Corps of Engineers, and Bonneville Power Administration have worked together to improve habitat, relocate adults into tributaries, and create artificial propagation programs.  The BPA alone has put $5 million into the effort.

“Last year we had close to 2,100 adults show up,” he says. “This year we think the numbers are approaching over 3,000. That’s good news compared to just 10 years ago when you could count all the lamprey returning to the Umatilla on your two hands.

“Hopefully within the next few years, we may have a harvestable population. That hasn’t happened in, gee, since, the 1970s.”

Back in southwestern Oregon, Richard Litts of the Tenmile Lakes Basin Partnership thanks the gathered staff and volunteers who’ve helped tag lampreys. He shares updates on eight radio tags already recovered from a previous batch.

“About half or more of those have actually been on land,” Litts says. “The antennas have teeth marks, kinda real sharp bends in them, where they’ve been chewed up, meaning that the lamprey was eaten by something.”

So obviously challenges await both researcher and lamprey. But if all goes to plan, these creatures will see a rebound in southwestern Oregon’s creeks and waterways soon.