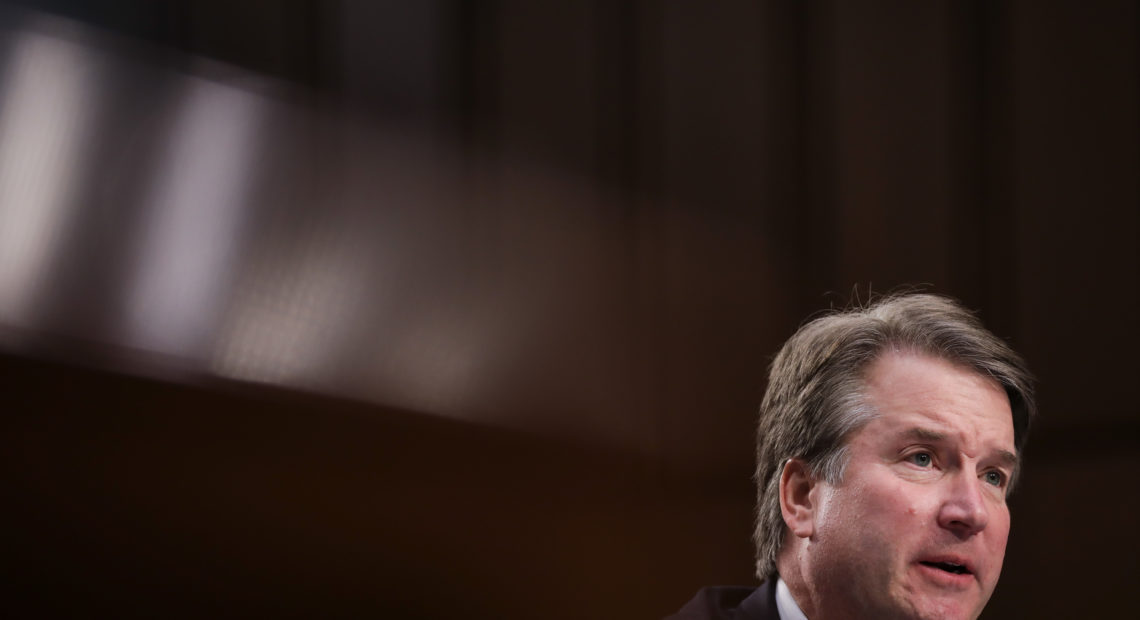 The woman who has accused Supreme Court nominee Brett Kavanaugh of sexual assault more than three decades ago may soon have the chance to tell her story before the Senate.

Sen. Chuck Grassley, R-Iowa, who chairs the judiciary committee, said in a statement Monday that he’s looking for a way that lawmakers can hear from Kavanaugh’s accuser, Christine Blasey Ford, “in an appropriate, precedented, and respectful manner.”

Ford has alleged that Kavanaugh assaulted her at a party in the early 1980s when they were both students in high school.

The assault accusation, made privately in July, took on new weight over the weekend when Ford went on the record with The Washington Post.

She described a high school party in the early 1980s at which a drunken Kavanaugh pinned her to a bed, attempted to pull off her clothes, and covered her mouth as she tried to scream. She said she escaped after Kavanaugh’s friend, Mark Judge, jumped on them.

Kavanaugh, who was at the White House on Monday, vehemently denied Ford’s account.

“This is a completely false allegation,” he said in a statement issued through the White House on Monday morning. “I have never done anything like what the accuser describes — to her or to anyone.”

Kavanaugh had issued a similar statement on Friday, before the identity of his accuser was made public.

“I am willing to talk to the Senate Judiciary Committee in any way the Committee deems appropriate to refute this false allegation, from 36 years ago, and defend my integrity,” Kavanaugh said.

Grassley was scrambling Sunday to schedule staff telephone calls with both Kavanaugh and Ford, which he called “the standard procedure.” But that approach failed to satisfy some senators.

Sen. Susan Collins, R-Maine, tweeted Monday that Kavanaugh and Ford “should both testify under oath before the Judiciary Committee.” As one of only two GOP women in the Senate and a key undecided vote on Kavanaugh’s nomination, Collins’ views may carry outsized weight with Grassley.

Sen. Jeff Flake, R-Ariz., who sits on the judiciary committee, joined Democrats in saying the vote on Kavanaugh’s nomination may have to be postponed.

“I’ve made it clear that I’m not comfortable moving ahead with the vote on Thursday if we have not heard her side of the story or explored this further,” Flake told The Washington Post. “For me, we can’t vote until we hear more.”

Sen. Dianne Feinstein, D-Calif., the committee’s top Democrat, said staff phone calls with Kavanaugh and his accuser are not sufficient.

“I agree with Sen. Flake that we should delay this week’s vote,” Feinstein said. “There’s a lot of information we don’t know and the FBI should have the time it needs to investigate this new material.”

Sen. Lindsey Graham, R-S.C., said he was open to hearing from Ford, while resisting calls to delay the vote.

“If Ms. Ford wishes to provide information to the committee, I would gladly listen to what she has to say and compare that against all other information we have received about Judge Kavanaugh,” Graham said in a statement. “If the committee is to hear from Ms. Ford, it should be done immediately so the process can continue as scheduled.”

Sen. Lisa Murkowski, R-Alaska, who is not on the committee but is a key undecided vote on Kavanaugh’s nomination, told CNN a delay may be necessary.

“If there is real substance to this, it demands a response,” Murkowski said.

Republicans, who hold a narrow majority on the committee and in the Senate, are eager to confirm Kavanaugh in time for him to join the high court when it begins its fall term in two weeks. But faced with a growing Me Too movement, they are also sensitive about appearances.

“To railroad a vote now would be an insult to the women of America and the integrity of the Supreme Court,” said Senate Minority Leader Chuck Schumer, D-N.Y.

In his statement Monday, Grassley complained that the allegation was made public just days before the committee was set to vote on Kavanaugh’s confirmation.

“Unfortunately, committee Republicans have only known this person’s identity from news reports for less than 24 hours and known about her allegations for less than a week,” Grassley said. “Senator Feinstein, on the other hand, has had this information for many weeks and deprived her colleagues of the information necessary to do their jobs.”

Ford initially contacted both Feinstein and The Washington Post in July, but at the time, she was not willing to make her allegation publicly.

“Victims of sexual assault have the right to decide whether and when to come forward,” Banks said about her client. “It was something that she struggled with mightily. She was weighing her desire and her belief that she had a civic duty to provide this information to those making the decision about Brett Kavanaugh with, frankly, her fear about coming forward, and there was going to be great personal risk to her and her family in doing so.”

Ford decided to go public after reporters began contacting her last week. Her attorney said Ford is “not motivated at all by politics.”