Once upon a time when Seattle was smaller, orchards dotted the shores of Lake Washington. Today, many of those old apple, plum and fig trees still thrive within urban neighborhoods. And every year around this time, they surprise new property owners—who may never have lived with fruit trees before—with chores they don’t know how to manage. As abundant fruit drops into backyards or onto city sidewalks, city dwellers wind up tossing what could be food straight from the ground directly into the compost bin.

So at this time of year, the phones at Seattle’s City Fruit  buzz with calls for help: “There’s too much fruit in my yard! Don’t want to waste it!”

City Fruit–a network of Seattle community service volunteers and experienced fruit-harvesters–was founded by Gail Savina, who, as a girl, picked apples in the town that called itself “The Apple Capital of the World” (Didn’t it, Wenatchee?).  She’s the author of Gather It: How to Organize an Urban Fruit Harvest.

Savina’s vision? “To manage this incredible resource holistically, focusing on education, stewardship, food policy, and sustainability, in addition to the harvesting and distribution of the fruit.” 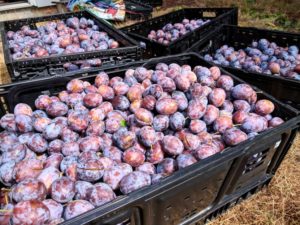 It’s working: As of August 22, City Fruit’s 2018 Great Seattle Fruit Harvest had gathered in 12,989 lbs of fruit, in 225 harvests. That’s three kinds of plums, two kinds of pears, grapes, and figs. Not to mention the apples.

This is the tenth year for this plucky nonprofit, whose volunteers hustle to answer the need for urban gleaners. This year, a call went out for even more volunteers to harvest all this abundance, and get it to the city’s food banks.

Fresh fruit contributes a much-needed healthy balance to food banks, where non-perishables, often not the most healthful foods, tend to dominate the offerings. Publicity about the harvest is also a call to educate the city’s changing population.

Seattle residents rarely have the skills of, say, City Fruit orchard manager Barb Burrill. She grew up on an apple, pear and cherry orchard outside Selah, Yakima County, where she learned how to pick and can fruit, and make pies.

To celebrate City Fruit’s 10th anniversary, Seattle Cider Company is taking the apples not quite up to the standards of local food banks, and turning them into “City Fruit Cider.” Half of the proceeds from sales of the cider will go directly to City Fruit to support their annual harvest. Cheers all around!

As of August 22, City Fruit’s 2018 Great Seattle Fruit Harvest had gathered in 12,989 lbs of fruit, in 225 harvests. That’s three kinds of plums, two kinds of pears, grapes, and figs, and lots of apples varieties!

Organizations that glean fruit in the Northwest: