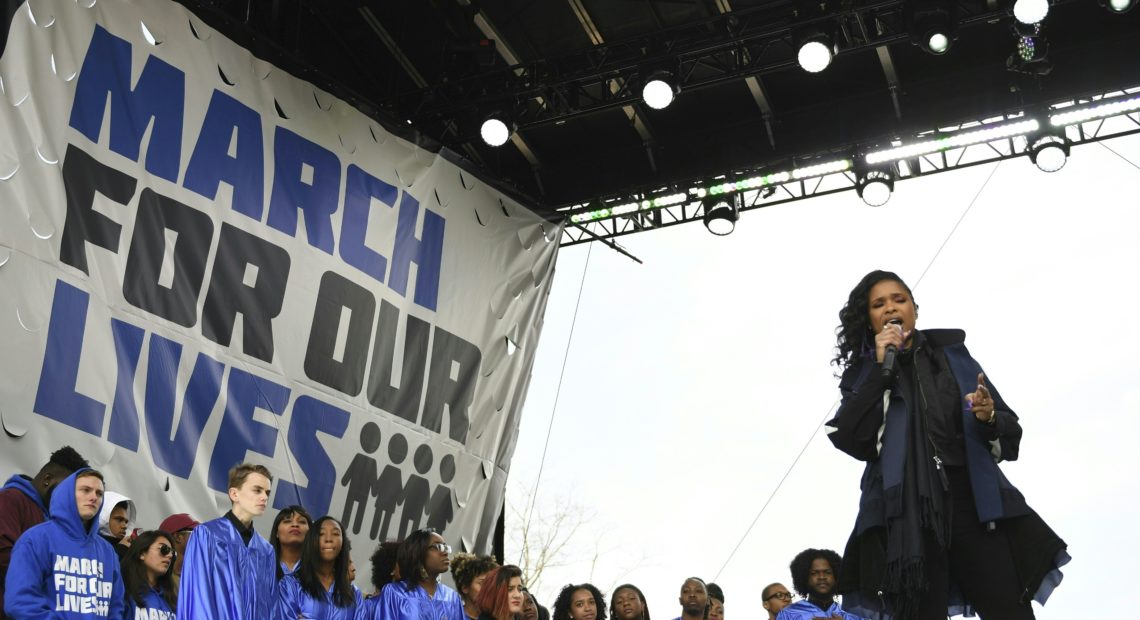 American Anthem: ‘The Times They Are A-Changin’ Still Speaks To Our Changing Times

PHOTO: Jennifer Hudson performs during the the March for Our Lives rally in Washington, D.C. on March 24, 2018. CREDIT: Jim Watson/AFP/Getty Images

Imagine you are 13 years old, on the cusp of adolescence. You are sitting in a comfortable suburban home, watching a news program about a civil rights protest. Young people, not much older than you, are being beaten with water from fire hoses and attacked by police dogs. The images shatter your comfortable world. You feel angry, confused. You want to do something, but you’re not sure what.

That 13-year-old was me. And right around that same time, I discovered Bob Dylan. Pretty much nothing was ever the same after that.

When Dylan first hit the music scene, Joan Baez was the reigning queen of folk. She would soon fall in love with both the man and his music — but even today, Baez doesn’t pretend to know what went on in Dylan’s head when he wrote the song “The Times They Are a-Changin’ ” in 1963. Though it may have become an anthem, she doubts that’s what he set out to create.

“It’s impossible to write an anthem. I would never attempt it,” Baez says. I mean, I think there are a lot of well meaning, politically intelligent musicians who’ve written a lot of songs. But to get people to really relate to it and sing along and have this sort of universality of time and place, that’s different, you know? That’s difficult.”

At the time, Dylan’s music was like nothing you’d ever heard before — not just that twangy, nasal voice, but the lyrics, too. Anthony DeCurtis, a contributing editor at Rolling Stone, grew up in New York’s Greenwich Village near the folk clubs where Dylan got his start — but says he might as well have lived a million miles away. He came from a conservative Italian family, whose values he was starting to question.

“Some of the rock stars that was I so infatuated with had a view of society that was very different from what my family, and certainly my school, was trying to instill in me,” he says. “So I was trying to understand, and Dylan was very important in that process.”

Inevitably DeCurtis, like so many other young people, was drawn into the movement against the war in Vietnam — which was quickly developing from peaceful protests to a growing militancy.

“It was people who felt like they were in a battle,” he says. “And, you know, you can go back to the ‘The Times They Are a-Changin’ ‘ for that: The line has been drawn, the curse has been cast. You really felt you had to stand on one side or the other.”

As the 1960s faded into the ’70s, the urgency of the song faded, too. Bob Dylan moved on to other things, and the generation he first sang for grew up and became mothers and fathers themselves. By the time a new generation came along, the times had already changed.

Matt Malyon was born in 1971. He was in his 20s before he discovered Bob Dylan. “There was a budget tape, The Freewheelin’ Bob Dylan, in Tower Records,” he recalls. “A cassette tape, if you can remember that technology.”

Malyon thinks “The Times They Are a-Changin’ ” is more relevant now than ever. He teaches writing to teenagers in Seattle, many from immigrant families. When he played this song for his students he thought they would like the poetry of the lyrics. Instead, they were caught up in the meaning of the words.

“When I made reference to, this song coming out of the ’60s, and [being] about the ’60s, there were some blank stares. And yet, the song spoke to them,” he says. “They see these words as living. It’s not something anchored to the ’60s, it’s something live, and now. And I think that ties to the timelessness of the piece.”

When thousands of young people descended on the National Mall earlier this year for the student-led March For Our Lives, Jennifer Hudson ended the event with an emotional rendition of the song, backed up by the local Destiny Road Choir.

The group’s director, Jonathan Ball, says he was surprised at the invitation: He hadn’t known the song, nor had most of the members. But as they started to rehearse, he says, the lyrics took on more meaning, and he began imagining what it would be like to sing those words — “Come senators, congressmen, please heed the call” — at the demonstration.

“In my mind, when I was arranging the part, I was like, I hope the president hears this,” Ball says. “I hope the powers that be, the senators, the congressmen, are actually listening — and like a movie, almost, they hear the music and they write a new law.”

Erika Edmund is the group’s lead singer. She says the the full impact of the song really hit when the choir sang it during the march, “because we were there looking at all of these people. I would look into the crowd seeing people crying — you know, you had families, you have people that are begging, screaming for change. So it makes it easy for me to sing this song, because it means so much to what I’ve seen now.” Choir member Therron Fowler was amazed that one song could be so powerful: “This anthem, it brought us together for something bigger than ourselves. No matter what race, what culture, background, religious whatever, it brought everyone together.”

And so, 50 years after Dylan wrote it, “The Times They Are a-Changin'” vibrates with new meaning. Perhaps that’s because the song itself doesn’t look to the past — rather, it’s an anthem of hope for a future where change is always possible.