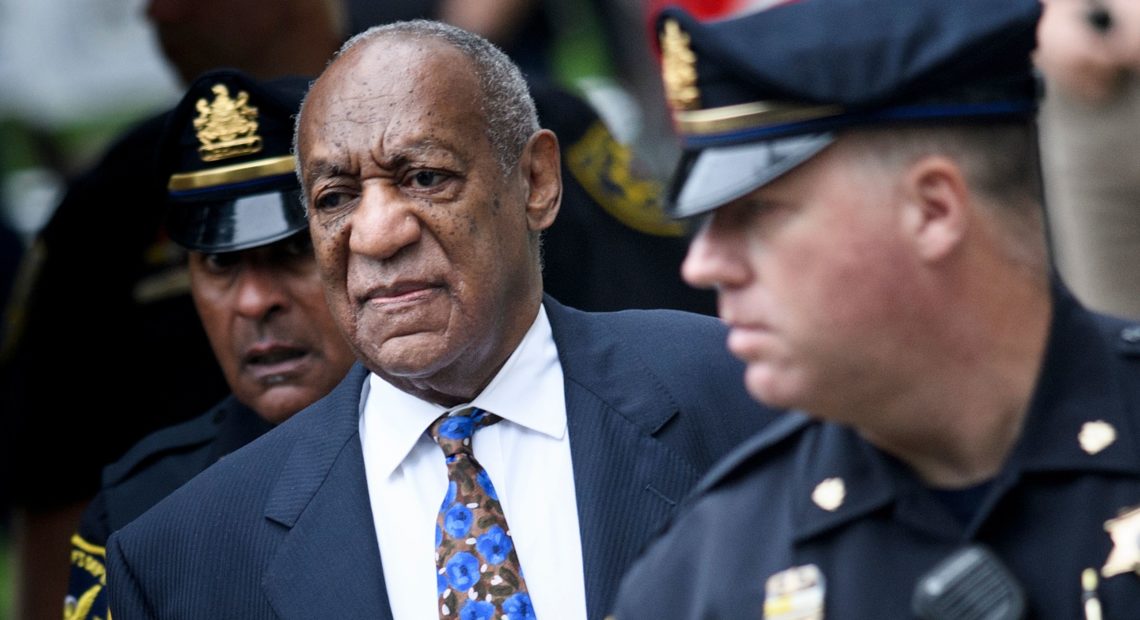 PHOTO: Bill Cosby arrives at a Norristown, Pa., court Monday. The first jury in the case deadlocked in 2017. A jury in the second trial convicted Cosby on all counts April 26, 2018. CREDIT: Brendan Smialowski/AFP/Getty Images

A Montgomery County, Pa., judge sentenced disgraced comedian Bill Cosby to three to 10 years in state prison Tuesday, saying that the words of Cosby’s main accuser Andrea Constand that the entertainer took her “beautiful, young spirit and crushed it” helped him reach his decision.

“It is time for justice, Mr. Cosby,” said Montgomery County Judge Steven O’Neill. “This has all circled back to you.”

The punishment, seen as the first celebrity prison sentence in the #MeToo era, is on the higher end of Pennsylvania’s guidelines for someone who has been convicted of aggravated indecent assault. Cosby’s lawyers argued over two days that the entertainer should be placed on house arrest. Prosecutors maintained that the maximum possible punishment of a decade of confinement was appropriate.

When his punishment was read, Cosby appeared not to react. Cosby’s wife, Camille, who stridently criticized the judge in the days leading up to the hearing, was not present.

Immediately after the judge handed down the sentence, Cosby’s lawyers asked that the 81-year-old be released on bail as he begins the appeals process. O’Neill denied the request, ordering that Cosby immediately enter custody.

Cosby took off his jacket and rolled up his sleeves and could be seen laughing with his legal team before sheriff’s deputies handcuffed him and escorted him out of the courtroom. As he shuffled by a sea of reporters, the comedian’s thin wooden cane was between his handcuffed wrists.

Asked for comment, Cosby looked down and said nothing. But after the hearing, outside the courthouse as rain trickled down, Andrew Wyatt, Cosby’s spokesman, vowed to fight the sentence and implied that the prosecution was racially biased.

“Mr. Cosby knows that these are lies,” Wyatt said. “They prosecuted Jesus and look what happened. Not saying Mr. Cosby is Jesus, but we know what this country has done to black men for centuries.”

The sentence means that after three years, Cosby would be eligible to be released on parole. If officials deem he has met his requirements in prison and can be released, he will have to attend monthly counseling and report his travels to state police, rules mandated by the judge’s declaring that Cosby should be considered a “sexually violent predator.”

Prosecutors also asked the court to require Cosby to cover the cost of his two trials, which added up to about $420,000.

After becoming the first African-American actor to star in a lead role in the buddy-cop show I Spy in 1965, Cosby’s acting career made him a household name. Ever since, he has been a cultural fixture, starring in films and television shows and putting out comedy albums for decades. His body of work developed his legacy as “America’s Dad,” in particular his depiction of obstetrician Cliff Huxtable on The Cosby Show, which ran for eight seasons until 1992.

Those contributions to American popular culture have now been eclipsed by his conviction as well as allegations of sexual misconduct leveled by dozens of accusers, mostly women with aspiring entertainment careers, stretching back to the mid-1960s.

“In many respects, I think this was the precursor to the furor that ignited with the Harvey Weinstein allegations surfacing,” said Deborah Tuerkheimer, law professor at Northwestern University.

In 2005, Constand, who was 32 years old at the time, reported to police in her native Ontario that Cosby had given her three blue pills and fondled her while she was incapacitated. Canadian police referred the case to authorities in Montgomery County, Pa. Then-District Attorney Bruce Castor declined to press charges. Constand then pursued a civil lawsuit against the entertainer that was settled for $3.4 million.

Fast forward to 2015 and at the request of The Associated Press, U.S. District Judge Eduardo Robreno unsealed deposition testimony Cosby gave during that civil case in which he described obtaining quaaludes to give women before sex. That revelation set off scores of other women to step forward and say Cosby drugged and molested or sexually assaulted them.

Days before the statute of limitations was set to expire in December 2015, prosecutors summoned reporters to Montgomery County to make a startling announcement: Cosby was being charged with three counts of aggravated indecent assault over a more than decade-old incident.

In the 2 1/2 years that followed, Cosby’s case went to trial twice in Norristown, Pa., not far from his estate where Constand says Cosby assaulted her.

The first jury deadlocked in 2017. A jury in the second trial convicted Cosby on all counts April 26, 2018.

After six days of deliberation in 2017, jurors failed to reach a unanimous verdict, resulting in a mistrial. Prosecutors did not give up, though, deciding to put Cosby on trial a second time. In April 2018, Cosby faced a different jury and, in many ways, a whole new world.

For one, the #MeToo movement had been unleashed, toppling bad-behaving men whose abuse had previously been kept secret. And the judge allowed five women in addition to Constand to take the stand and confront the famous comedian to help illustrate Cosby’s pattern of predatory behavior. That was four more women than the judge permitted during the first trial. Legal experts say those women helped bolster the credibility of Constand.

When the women took the witnesses stand, a pattern emerged. The women told the court that Cosby sought them out and gained their trust before arranging for private meetings, often under the guise of career advice or script coaching, at which Cosby would drug them then sexually prey on them.

Among the five women who took the stand in the second trial was model Janice Dickinson, who, along with the other accuser witnesses, Cosby’s lawyers attempted to paint as a fame-seeking liar who had fabricated stories to smear a famous person.

“You said words to the effect that, ‘For 30 years, I didn’t know I had been raped,’ ” said Cosby attorney Thomas Mesereau during cross-examination. “So, for 30 years, you didn’t think anyone had sexually assaulted you?”

“It still takes me everything within my being to say the words ‘I was raped,’ because I still carry the guilt,” responded Baker-Kinney.

Throughout the proceedings, Cosby’s legal team maintained the comedian’s innocence, arguing that the encounter with Constand was consensual. In the first trial, Cosby’s lawyers emphasized an alleged mutual romance between Cosby and Constand. With a retooled legal team for the second trial, Cosby’s lawyers had a new approach: attempting to portray Constand as a “con artist” who had long planned to concoct a false allegation against Cosby in order to secure a multi-million-dollar payout.