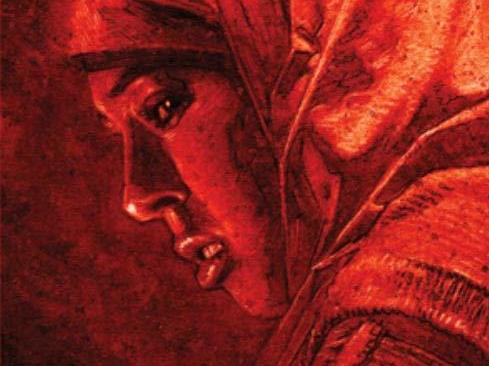 Right on the cover, Pornsak Pichetshote and Aaron Campbell’s horror comic Infidel lays out a bold goal. Campbell’s powerful illustration — a woman in a headscarf menaced by an exaggerated, spiky hand — signals that this book will delve into the real-world theme of racism while simultaneously embracing the phantasmal devices of horror. Not only do the creators achieve their aim, balancing two seemingly opposed tendencies with uncanny facility, but they draw on that opposition to express a subtle message about how racism works — all while serving up scenes that will unsettle the world-weariest fan. (No wonder this comic, which was first released in episodic form, made it onto NPR’s list of 100 favorite horror stories.) 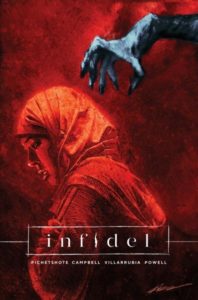 Pichetshote keeps Infidel beautifully simple. It’s basically a haunted-house tale transplanted to a run-down city apartment building. When Aisha, a Muslim woman living with her white fiancé Tom and his daughter, begins having strange dreams and seeing horrible visions, the reader learns their building has a past. Some time ago, a Muslim resident was hoarding explosives and napalm in his apartment, and there was an explosion. “He was just a nut, not some — you know — sleeper agent,” one character recalls. “It wasn’t even a suicide bombing … There are theories he was even surprised when the bombs went off.”

The incident awakened terrible entities that both nurture and feed off people’s darkest instincts. When Aisha starts seeing them, and then is involved in an awful accident, the fact that she shares the bomber’s religion convinces some residents she can’t be trusted.

The creators perfectly capture the claustrophobia of life in an urban walkup. Aisha and Tom’s place is so small, they have to go out on the street to fight without his mother hearing — and she does anyway. The building’s other residents are drawn into Aisha’s crisis through inevitable proximity. The crowded conditions nurture racial tensions and make each person’s tiniest decision a charged matter. There’s the old man who refuses to speak to Aisha: Is he motivated by racism? Run-of-the-mill standoffishness? Or a combination of the two? A seemingly friendly Korean woman turns against Aisha as soon as things get spooky, declaring, “I’m not automatically giving those people the benefit of the doubt just because I might sound closeminded.” Then there’s the blonde neighbor who lies about Aisha to the police. “I was living here when those bombs went off,” she says defensively. “Nobody has a better reason to be paranoid than me.”

Campbell’s images are as essential as Pichetshote’s words to expressing Infidel‘s theme. At first, Campbell’s approach seems like an error: The human characters, though realistically drawn, are much less expressive and dynamic than the spirits menacing them. Though the humans pull some believable expressions of terror, most often their faces are rather closed, and their physicality is stilted. Not so the spirits, which manifest in all sorts of creative and disgusting ways. They’re both hideous and eerily graceful. In fact, the spirit world is much more vivid than the human one.

Campbell uses this disparity to make an important point. The spirits, we learn, dwell in “this other side beside ours. An invisible realm of pure emotion. Pure love, hate, fear, hope.” Their hideousness, so much more charismatic than mere humanity, underlines how appealing such extremes can be. As the humans give in to reductive, stereotypical thinking, the spirit world’s compelling visuals tempt and taunt the reader.

Campbell’s characters are sometimes too stiff. Tom in particular is a cipher; besides being underwritten, he’s schematically drawn. But Campbell’s extravagant, layered textures in a variety of mediums, combined with colorist José Villarrubia’s incandescent tones, make every encounter with the other side gripping. With its precise interplay of real-life fears and supernatural terror, Infidel is as mesmerizing as it is insightful.

Etelka Lehoczky has written about books for The New York Times, The Los Angeles Times and Salon.com. She tweets at @EtelkaL.