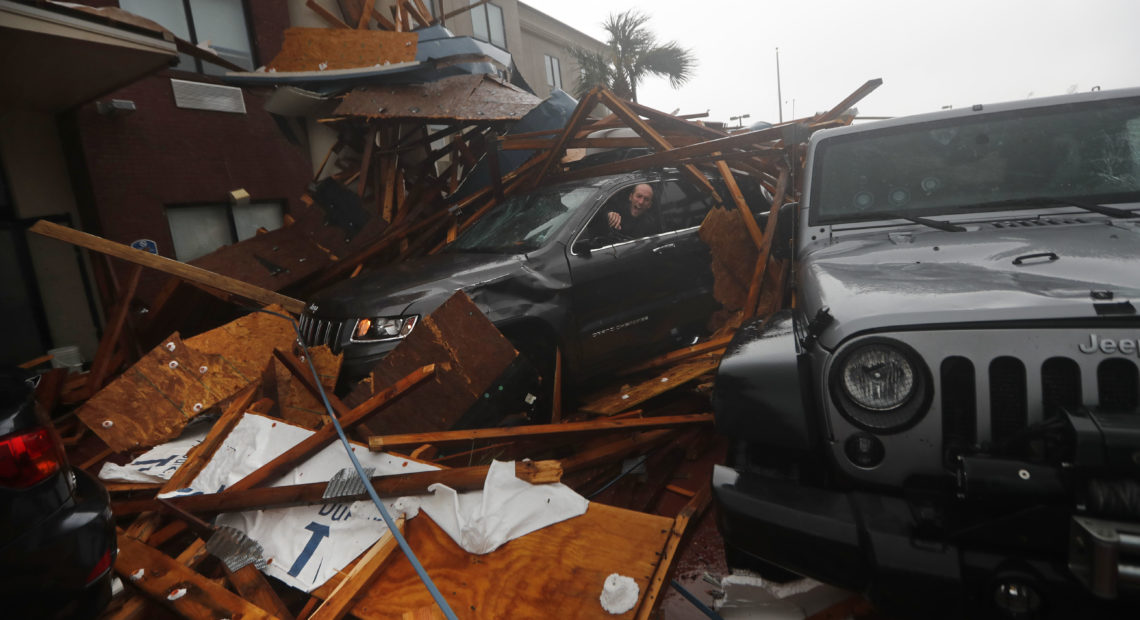 PHOTO: A storm chaser climbs into his vehicle as the eye of Hurricane Michael passes over Panama City Beach, Fla., hoping to retrieve his equipment after a hotel canopy collapsed in the parking area. The storm came ashore as a nearly Category 5 hurricane Wednesday. CREDIT: Gerald Herbert/AP

The hurricane center said, “everyone in the landfall area is reminded not to venture out into the relative calm of the eye, as hazardous winds will increase very quickly as the eye passes!”

The NHC reported the storm’s minimum pressure had fallen to 919 mb as it neared land — a statistic that makes it one of the most powerful hurricanes ever to make landfall in the U.S. For comparison, Katrina had central pressure of 920 mb in 2005. 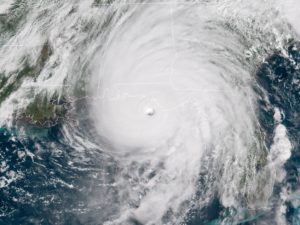 Hurricane Michael, seen here as it neared the Florida Panhandle around noon on Wednesday, is the strongest storm to hit the area since records were first kept.

The storm’s winds make it a very strong Category 4 storm; it would need sustained winds of 157 mph or higher to reach Category 5 status.

As it came ashore, Michael was projecting hurricane-force winds up to 45 miles from its center, and tropical-storm-force winds outward up to 175 miles.

It is the first Category 4 storm to hit the Florida Panhandle since records were first kept in 1851, said NHC Director Ken Graham.

“This is definitely [and] unfortunately a historical and incredibly dangerous and life-threatening situation,” he added.

More than an hour before landfall, hurricane-force winds of above 75 mph were already being reported in Apalachicola, Fla. Water quickly and steadily rose along the coast: A weather station in the small Gulf city reported flooding at 6.5 feet above ground level. High winds also forced officials to close several bridges in Bay County.

“We’ve issued our first ever Extreme Wind Warning,” the National Weather Service office in Tallahassee said in a tweet, as the storm approached. Noting that the warning means winds in “excess of 130 MPH are expected,” the agency urged people in the area to take shelter “immediately.” 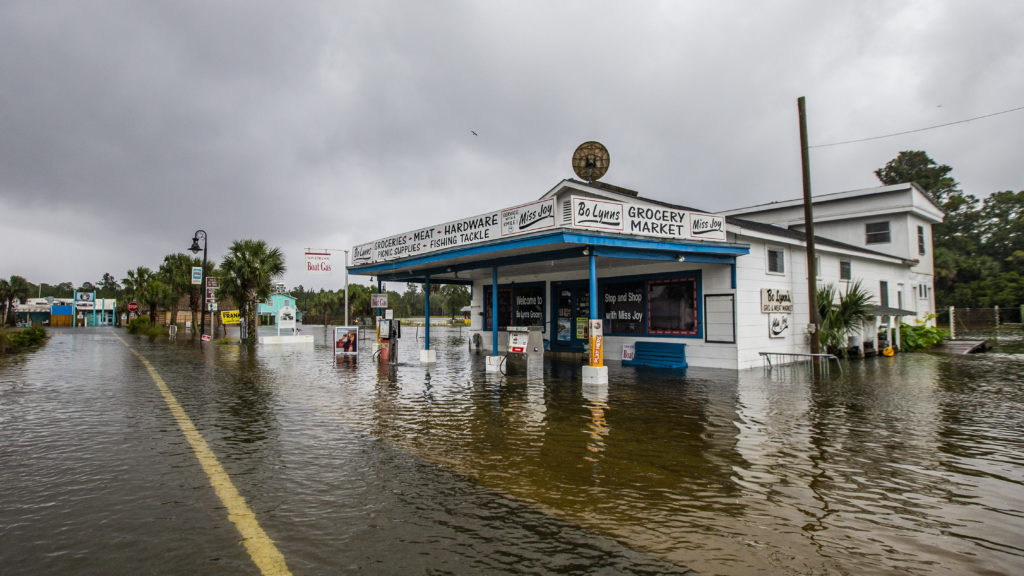 People in the storm’s path should not focus on its central track, Graham said. He warned people who live miles away to be prepared for the hurricane’s “incredibly damaging” winds, storm surge and rain.

Michael is expected to bring life-threatening flash floods and storm surges throughout coastal areas along the Gulf, from Pensacola around the coast to Tampa.

Even before the storm made landfall, Florida officials said roughly 30,000 people had lost power due to the hurricane.

Seated in front of charts depicting the storm, Trump said he had had a “long talk” about the hurricane with Florida Gov. Rick Scott, according to a pool news report.

“It’s like a big tornado, a massive tornado,” Trump was quoted as saying in the pool report.

Appearing at a White House event moments later, Trump said federal agencies are poised to help state emergence officials as they cope with the need for food and other aid.

“I just say, God bless everyone, because it’s going to be a rough one,” Trump said.

Flooding started late Tuesday and early Wednesday in some areas; the NWS office in Tallahassee posted a photo of a building near Panacea, Fla., with water seeming to cover its lower third by around 6:30 a.m. local time.

With the storm powering toward the coast, the Weather Channel’s Mike Bettes said he and his crew were leaving Apalachicola, adding, “Better safe than sorry.”

The hurricane center has raised its estimates of the storm surge, saying ocean water could reach levels of 9 to 14 feet aboveground in a central area around Apalachicola. For miles on either side, low-lying areas could see a surge of 6 to 9 feet.

With the storm on Florida’s doorstep, Gov. Rick Scott told residents Wednesday morning, “it is not safe to travel across the Panhandle. [If you are in a coastal area], do not leave your house. The time to evacuate in coastal areas has come and gone.”

Those further inland, Scott said, might be able to seek shelter if local officials say it is safe. Otherwise, residents should prepare to endure the storm at home.

“The worst thing you can do now is leave, and put yourself and your family in danger,” Scott said.

There are currently 54 shelters open across the Panhandle and Big Bend areas, Scott said, adding that more than 1,000 search and rescue personnel will be deployed after the hurricane passes through.

“We have trucks loaded with tons of food, water and other critical supplies, ready to move in,” Scott said.

The NHC predicts Michael’s center will move inland over the Florida Panhandle or Big Bend area before moving northeast across the southeastern U.S. Wednesday night and Thursday. It will then move off the East Coast — but as it does so, it will also regain some strength from the Atlantic Ocean.

Areas along the coast and inland, miles from the expected landfall zone, will be at risk from this strong and large storm. With its winds at nearly twice the minimum for hurricane status, Michael could remain a hurricane into early Thursday morning — a time when forecasters expect it to have plowed into southern Georgia.

The surge of water began arriving late Tuesday, ahead of the main storm and before its heavy rains, which will come as drainage systems are already trying to cope with the ocean water surge. 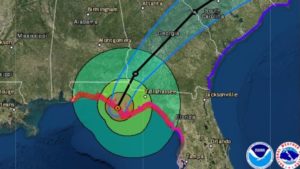 After making landfall around 1:45 p.m. ET Wednesday, Hurricane Michael is expected to plow through Florida and Georgia on its way to the Mid-Atlantic Coast.
CREDIT: NOAA/NWS, Esri, HERE, Garmin, Earthstar Geographics

Some 300 miles of coastline remain under storm surge, hurricane and tropical storm warnings. Storm surge warnings continue, from the Okaloosa County-Walton County line to the Anclote River. Another spans from the Anclote River to Anna Maria Island, including Tampa Bay.

Tropical storm warnings are now in effect in the Carolinas, from South Santee River, S.C., to Surf City, N.C. Much of the Alabama coast is also under warning.

Residents of the Panhandle and Big Bend face enormous predicted storm surges, the likes of which could destroy homes, according to the National Weather Service. The NHC predicts these coastal regions can expect 9 to 13 feet of storm surge, as Michael’s winds force a wall of water onto the low-lying shore.

Category 4 storms pack winds from 130 to 156 mph and cause “catastrophic damage,” according to the Saffir-Simpson hurricane scale. Here’s how the scale describes a Category 4’s potential effects:

“Well-built framed homes can sustain severe damage with loss of most of the roof structure and/or some exterior walls. Most trees will be snapped or uprooted and power poles downed. Fallen trees and power poles will isolate residential areas. Power outages will last weeks to possibly months. Most of the area will be uninhabitable for weeks or months.”

Looking ahead to the aftermath of the storm and the likely downed trees and utility lines, Graham said, “You have to stay away from those power lines. If you have trees down, it’s not the time to start learning how to use that chainsaw.”

People should also keep their generators outside, he added, to avoid being overcome by toxic fumes.

A tornado watch is also in effect along Michael’s outer bands, as they move over land.

In Georgia, Gov. Nathan Deal issued a state of emergency for 92 counties in the central and southern part of the state. As of noon Wednesday, there were no evacuation orders in the state, but its emergency agency said evacuees from neighboring states could use parks, campsites and other facilities.

In South Carolina, the Greenville-Spartanburg office of the National Weather Service did something it has never done before, issuing a tropical storm watch and warning for the area that’s hundreds of miles from the Atlantic coast.

“It’s just a whole mess of products today, but flash flooding is our #1 concern,” the NWS office said.

That was one of more than 60 alerts and warnings in effect for South Carolina. The state says its offices are on alert for a possible emergency, from Michael’s strong winds and heavy rainfall.

South Carolina remains under a state of emergency from the recent Hurricane Florence; Gov. Henry McMaster extended that order today.

“While we will not see the full force of Hurricane Michael the way Florida will, we could see gusty winds, rain, flash flooding and even tornadoes,” S.C. Emergency Management Director Kim Stenson said. “Over the next day, it will be vital for everyone to be prepared to act if told to do so by your local public safety officials.”