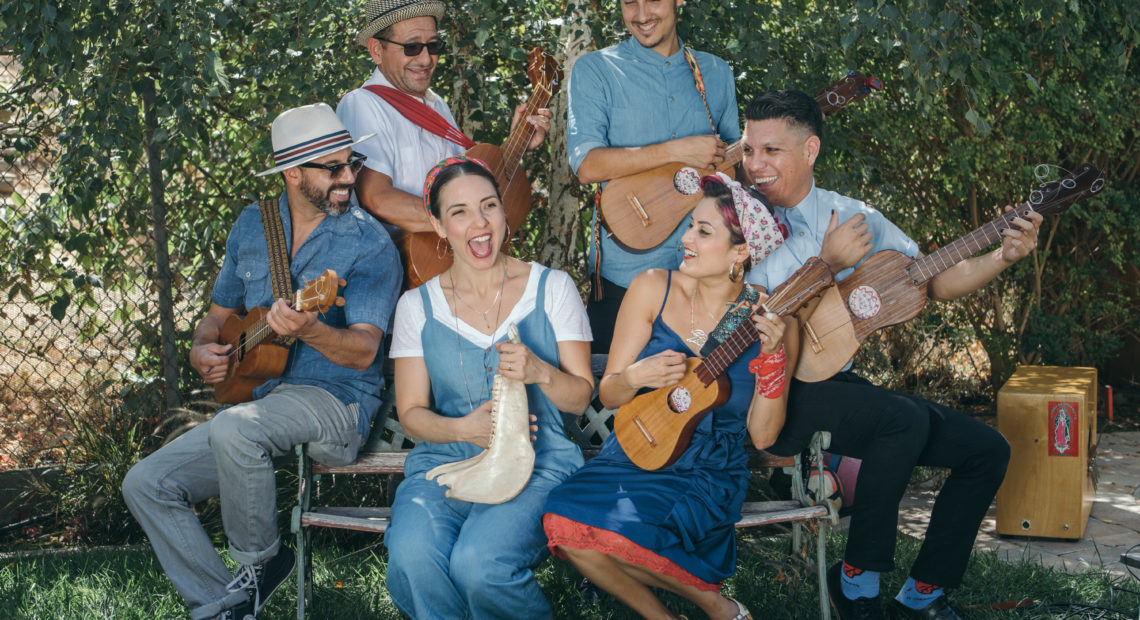 American Anthem: Through Slavery, Segregation And More, ‘La Bamba’ Is The Sound Of Survival

Sixty years ago this month, a 17-year-old Mexican-American kid in California released a single that quickly climbed to the Top 40.

In 1987, an East Los Angeles rock band added their own spin, which became the first song in Spanish to hit No. 1 in the United States.

And just last fall, that same song found a new meaning on the streets of Shelbyville, Tenn., about an hour south of Nashville, as counterprotesters faced down a group of neo-Nazis and white supremacists.

It had been two months since the Charlottesville “Unite The Right” rally, where Heather Heyer was killed after a car plowed into demonstrators. On this unusually cold October Saturday in Shelbyville, opposition to the event was out in force. According to news reports, counterprotesters outnumbered actual attendees of the so-called “White Lives Matter” rally by at least three to one. They carried signs with slogans “Hate Has No Home Here,” and they brought a sound system so they could drown out the white supremacists with chants and music.

“It was loud,” says Chris Irwin, one of the organizers. “I’m afraid we may have damaged their hearing.”

Irwin is a lawyer in Knoxville who refers to himself as a “tree-hugging, sixth-generation East Tennessean.” He’s been to a lot of protests in his time, and says he recognized some of the people on the other side that day.

“There’s this guy we call Angry Santa. And Angry Santa is a KKK guy, unabashed,” he explains. “And he starts talking about rounding up ‘all you degenerate whores.’ ”

And so, Irwin says, he decided to try something — a particular song, cranked over the speakers. Here’s how Trevor Noah, on that Monday’s episode of The Daily Show, described what happened next:

“A white supremacist gets up to give a speech. And he doesn’t get punched — someone just starts playing ‘La Bamba.’ That is the greatest protest ever. These people don’t deserve our anger, they deserve our ridicule.” Pointing out a bobbing head in the news footage, he added, “Even one of the Nazis can’t help but dance along.”

“Think about that,” Irwin says, recalling the moment. Here was a group of white supremacists, spouting hate — and on the other side, “we had a thousand people show up. African-Americans, immigrants, Hispanics, brave people — dancing and laughing at them.”

As right as “La Bamba” is for these times, it’s got a long history. As the story goes, 1950s rock star Ritchie Valens — that 17-year-old kid from the the San Fernando valley — probably grew up hearing the Andres Huesca version of the old Mexican folk song, which was popularized during the golden age of Mexican cinema around the 1940s.His own recording, released in 1958, was actually a B-side — but it became a surprise hit, climbing to No. 22 on the singles chart.

It was the most enduring hit in a short career. Valens was just 17 years old when he died, along with Buddy Holly and J.P. “The Big Bopper” Richardson, in a plane crash in Iowa on Feb. 3, 1959. In 1987, his life and death became the subject of a film, also called La Bamba, which featured a new version of the song by Los Lobos.

“If there is one song that represents the Americas, it is this one song,” says Luis Valdez, the director of La Bamba.

While the song is familiar to most Americans today, Valdez says the meaning of its title remains a mystery. He did lots of research for the film, and thinks it’s a reference to something he calls “umbamba,” from Africa. “It was a beat, it was a sound, that landed on the shores of Veracruz.”

Some history here: Enslaved Africans were brought hundreds of years ago to Veracruz, Mexico. Because cultural fusion has long been a means of survival, African, indigenous and Spanish traditions were mashed up as a result. Out of that mashup, a musical style was created called son jarocho.

In traditional versions of “La Bamba,” the instruments in son jarocho get played in a rhythm that is undeniably Afro-Carribbean. “It’s, like, embedded in the strum itself,” explains Alexandro Hernandez, an ethnomusicologist at UCLA. “It is that Afro-Caribbean connection that’s been there for hundreds of years, mixed in with a little bit of Español and first nations.”

The Valens version added a modern twist. At the time the musician (whose real name was Richard Valenzuela) was growing up, segregation was still legal in parts of the U.S. and some kids were punished in public schools for speaking Spanish. But there was at least one cultural force strong enough to cross those boundaries.

Of course, rock and roll itself is a mashup that, like son jarocho, has roots in slavery and colonization. The Los Lobos version of “La Bamba” created for the film starts in one style and ends in the other, drawing a line between two sounds of survival. In August 1987, it reached No.1 on the American singles chart.

“My parents are big fans of Los Lobos, so I just remember hearing [that] version a lot in the car,” says Leah Rose Gallegos. She’s a member of a band called Las Cafeteras, also from East L.A., which is taking “La Bamba” in yet another new direction: mixing son jarocho with influences from hip-hop culture.

I met up with the band at their first practice space, Gallegos’ parents house in Highland Park and they played me their version. Where Ritchie Valens sang that, to dance la bamba, you need a little grace, singer Denise Carlos instead raps, “This is the rebellious la bamba, because we’re Chicanos from East L.A. I don’t believe in borders, I’ll cross them.”

Carlos says son jarocho is a style of music where the lyrics are always changing — like freestyling in hip-hop — and so “La Bamba” is constantly evolving. Those lyrics, she explains, represent how she and her band are feeling in America right now.

Bandmate Hector Flores agrees: “We’re not from Veracruz — we’re from right here. We L.A. kids. We speak Spanish just as bad as we speak English. And that allowed us to be proud of ‘La Bamba.’ ”

The song follows the band everywhere — even on vacation. Gallegos says she was traveling in Thailand with her husband, who’s also a member of the group, and they were invited to a karaoke birthday party. Everyone knew they were American, so they got two requests from the crowd: “Do an Elvis song and do ‘La Bamba.’ And we’re like. ‘OK, let’s do it!’ ”

“People all over the world, when they think U.S. culture, and they’re like, ‘Yeah, “La Bamba” is part of that’? That’s so dope to me,” Flores says. “This song survived slavery, colonialism and you’re damn sure it’s going to survive Trump, because it lives within us. And we invite everybody to also make it yours.”