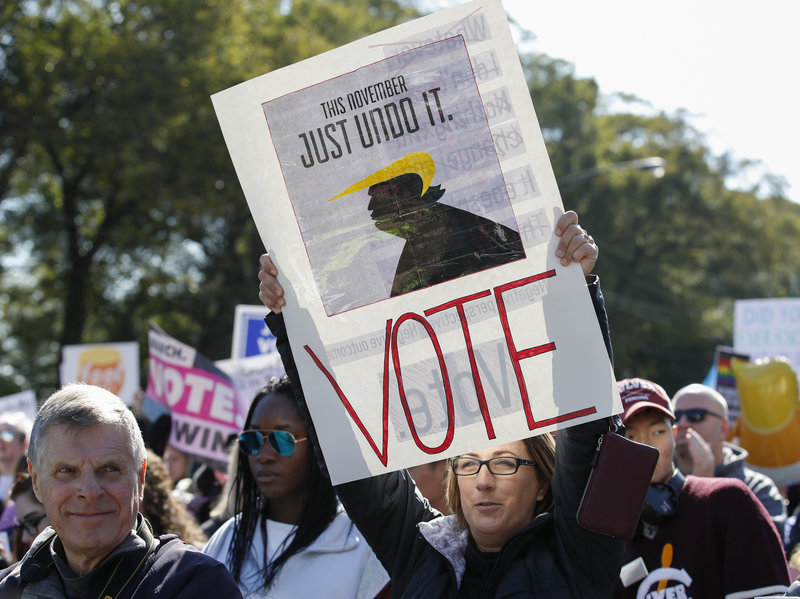 The 2018 elections could see the highest turnout for a midterm since the mid-1960s, another time of cultural and social upheaval.

“It’s probably going to be a turnout rate that most people have never experienced in their lives for a midterm election,” Michael McDonald, a professor at the University of Florida who studies turnout and maintains a turnout database, told NPR.

McDonald is predicting that 45 to 50 percent of eligible voters will cast a ballot. That would be a level not seen since 1970 when 47 percent of voters turned out or 1966 when a record 49 percent turned out in a midterm. 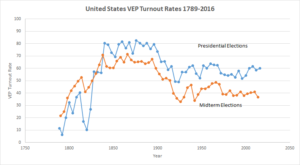 In 1966, Democrats were the ones facing a backlash. President Lyndon Johnson was in the White House and Congress had just passed his Great Society measures on Medicare, voting rights and civil rights.

Democrats wound up losing 47 House seats and three Senate seats, “heralding the end of the New Deal coalition and the realignment of voters that will put Richard M. Nixon (R) in the White House in 1968,” as T.A. Frail at the Smithsonian put it.

On average since World War II, only about 40 percent of Americans eligible to vote cast a ballot in midterms. That’s 30 percent lower than presidential elections. In 2014, a record low 36 percent cast a ballot, the lowest in 70 years — since 1942, when many adults were fighting in the war overseas.

But the Trump presidency has spurred a high level of interest in the 2018 midterms. Angry and frustrated Democrats, especially women, are looking to exact a measure of political revenge, as Republicans promise to stick with Trump. The 2018 midterms offer Democrats their first chance to take a stand.

McDonald said he bases his forecast on four indicators:

3. A high degree of self-reported interest in the election.

4. High levels of early voting. In some states, McDonald said he is seeing early voting that is exceedingly high. In Georgia, for example, comparing to this time in 2014, early vote turnout is three times higher, so far.

“It just seems like all four indicators, they’re all pointing in the same direction,” McDonald said.

Digging into some of those and other factors, there are other signs:

High primary turnout. This has been particularly true among Democrats. According to a study by a Republican pollster of voting in 35 states, Democrats saw a 78 percent increase in turnout, compared to 2014, while Republicans saw a 23 percent uptick. Democrats were at a similar turnout level as when they took back the House in 2006 — accounting for 53 percent of all primary ballots cast; in 2006, they cast 54 percent of primary ballots.

High overall interest and engagement. A higher percentage of Democrats than at any other time in the past quarter century told Pew they are more enthusiastic about voting than usual. Among Republicans, Pew found a sign of resilience. The level of interest in the GOP in 2018 is higher than in parties that were successfully overtaken by wave elections in the past.

Core Democratic groups may be showing more interest. Low propensity voters in past midterms — young voters and nonwhites — are showing some mixed signs they might have a higher interest than past elections. An October ABC News/Washington Post poll found that far more voters who are under 40 and nonwhite are saying they are “absolutely certain to vote” compared to the 2014 midterms.

At the same time, however, an early October NPR/PBS NewsHour/Marist poll and a late September NBC/Wall Street Journal survey found core Democratic groups, like voters 18 to 29 and Latinos, are far less interested than core Republicans, like whites, men and older voters.

But even if those core Democratic groups lag behind core Republican groups, that could still be good news for Democrats if those low-propensity groups vote in higher numbers than in past midterms.