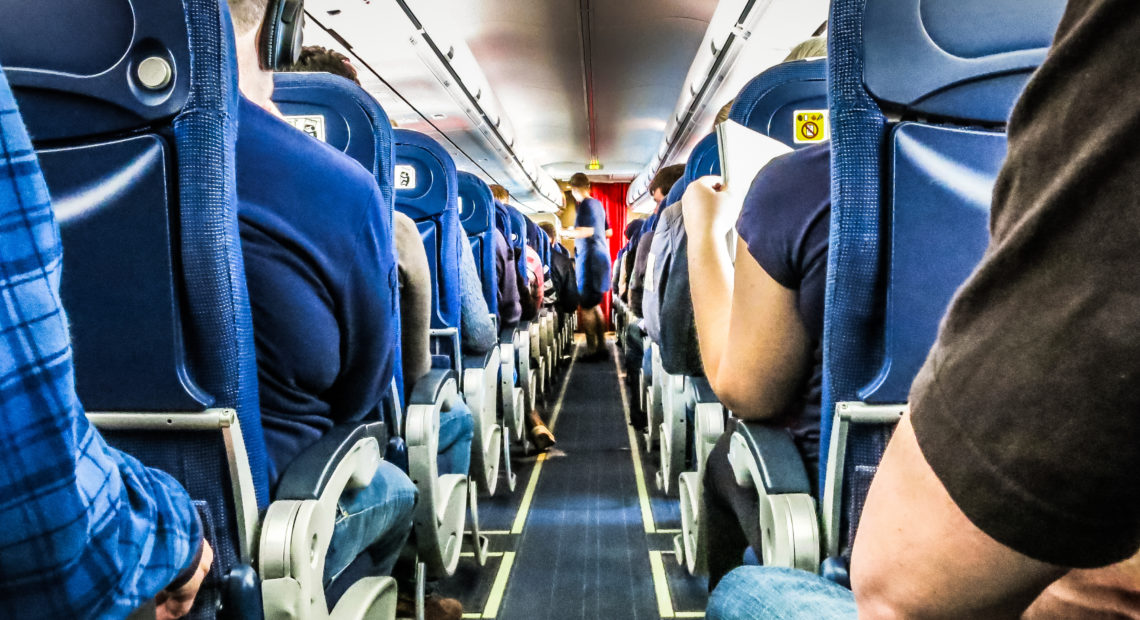 Cramped Legroom On Flights Unlikely To Change, Despite Congressional Mandate

This isn’t exactly the golden age of airline travel but it’s a pretty good time to fly by a lot of measures. Flying has never been safer. Air fares are historically low when adjusted for inflation. Technology makes it easier to search for fares and book flights while also helping airlines lose fewer bags and improve their on-time performance.

But if there’s one thing air travelers still love to complain about, it’s the size of economy class seats.

Jose Maldanado, a 30-year old from Florida, is 6 feet 3 inches tall. He says his flight to Chicago’s O’Hare Airport was “rough” because his seat was “small.” And Maldanado’s complaint isn’t just that there’s no legroom.

“There’s no room for your feet. You can’t put your feet nowhere,” he says. “You’re like, not pigeon-toed, but you’re facing like duck feet sideways and that hurts your ankles at the same time while you’re sitting down.”

“When I was on the plane, I was dreading the flight back already,” adds Maldanado, saying he knows “it’s gonna be cramped.”

Senthil Sivakumar of Austin, Texas, is 6 feet 2 inches and has to fly a lot for work. He says, when in economy class seats, his knees are always pressing right up against the seat in front of him.

“What I pray every time is that the guy in front of me does not lean back because that’s when it truly is hell,” says Sivakumar

Even a more diminutive Nikki Devereaux of Rockford, Ill., who is about 5 feet 7 inches, would like a little more room.

“You know, sometimes your hips don’t fit all up in the seat too much, your thighs are a little wider than I guess the little area that they put you in. That’s my complaint,” she laughs.

By packing in rows of seats more tightly, airlines can cram more seats onto a plane and sell more tickets per flight. That, they argue, allows them to keep fares relatively low and remain profitable.

But Paul Hudson of the group FlyersRights.org says the shrinking seats and tightening pitch — the distance between your seat and the one in front of you — not only makes flying uncomfortable, but it poses a safety hazard.

The FAA requires that aircraft interiors be designed in such a way that the plane can be evacuated in 90 seconds in an emergency.

But Hudson says the smaller seats and tighter pitch used by most airlines today could slow the evacuation of a plane and puts passengers at risk.

“Without proper regulation, I’m afraid it’s going to get worse and worse, until there are real disasters,” he says.

The FAA disagrees and rejected FlyersRights’ petition to establish a minimum seat size and pitch, ruling that the smallest space airlines currently use — a mere 28 inches on some low-cost carriers — is roomy enough to allow for the safe evacuation of a plane in 90 seconds or less.

Enter the U.S. Congress, which is providing a glimmer of hope for air travelers tired of those shrinking airline seats. It included a provision in the recently approved Federal Aviation Administration reauthorization act that orders the FAA to establish minimum seat widths and pitch.

The problem, according to Hudson, is that the law doesn’t tell regulators what that minimum standard should be.

“They could potentially freeze things where they are or even make it worse,” Hudson says.

Marisa Garcia, who used to work in the design and manufacture of aircraft interiors and now writes about the aviation industry at FlightChic.com, agrees.

“It is unlikely that the industry will be pushed to a reversal,” says Garcia. “And the reason for that is that it would be an extremely uncompetitive situation for them.”

Forcing the airlines with the least legroom, like low-cost carriers Spirit and Frontier, to yank out rows of seats to meet any new rule could cost them millions. And Gary Leff, a travel writer and author of the View From the Wing blog, says, “these ultra low cost carriers that do squeeze seats a little bit closer together are the ones that have really been driving down the price of air travel.”

So mandating more legroom could drive up fares, Leff says.

“If you reduce the amount of pitch between seats — [reducing] the number of seats they can have on a given plane — the cost per seat for those airlines is going to be higher.”

Leff notes that while travelers like to complain about tighter seats and less legroom, they don’t seem to be flying less or paying more for extra space because of it.

“In fact there have never been more people traveling than there are today,” Leff says. “Planes are as full as they have ever been. So people certainly aren’t voting with their wallets even as airlines squeeze seats tight closer together.”

Another reason why the FAA may not mandate more room between rows of seats is because such a new regulation would run counter to President Trump’s orders that federal agencies repeal regulations, not add more of them.

“It’s that kind of ‘what will the FAA do?'” says aviation writer Garcia. “Do they follow one mandate [from the president] to reduce regulation or another mandate [from Congress] to increase regulation?”

Spokespeople for the FAA did not return repeated calls and emails seeking comment on how the agency will go about establishing minimum seat width and pitch dimensions, but Garcia and others expect the regulators will just codify the minimums used by airlines today and will not give air travelers any more space or leg room.

“The bottom line is, I don’t expect that people are going to get more room back,” Garcia says, “but at least they won’t be worse off.”