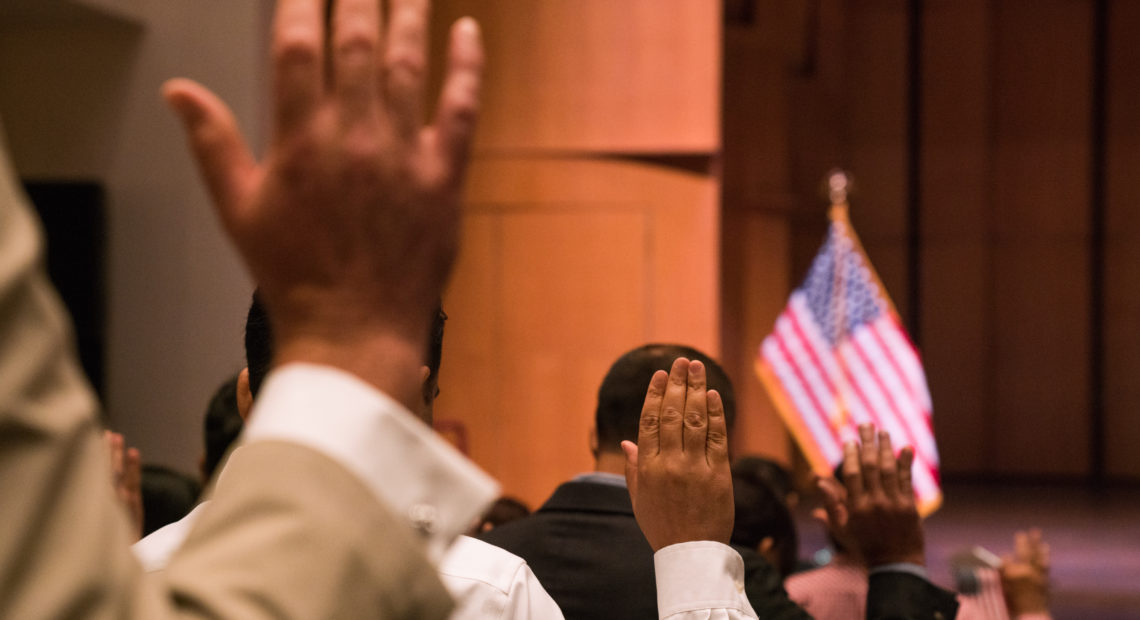 Citizenship Question May Be ‘Major Barrier’ To 2020 Census Participation

PHOTO: Newly sworn-in U.S. citizens gather for a naturalization ceremony at the Rachel M. Schlesinger Concert Hall and Arts Center in Alexandria, Va., in August. The Trump administration is planning to include a question about U.S. citizenship status on the 2020 census. CREDIT: Claire Harbage/NPR

The controversial new citizenship question the Trump administration added to the 2020 census may turn out to be a “major barrier” to the country’s full participation in the upcoming national head count, according to a national study commissioned by the Census Bureau.

The Constitution requires every person living in the U.S. — both citizens and noncitizens — to be counted once a decade. Those population numbers are used to determine how many congressional seats and Electoral College votes each state gets.

For the upcoming 2020 census, the Trump administration is planning to include a question it says the Justice Department needs to better enforce Voting Rights Act protections against racial discrimination. The question asks, “Is this person a citizen of the United States?” 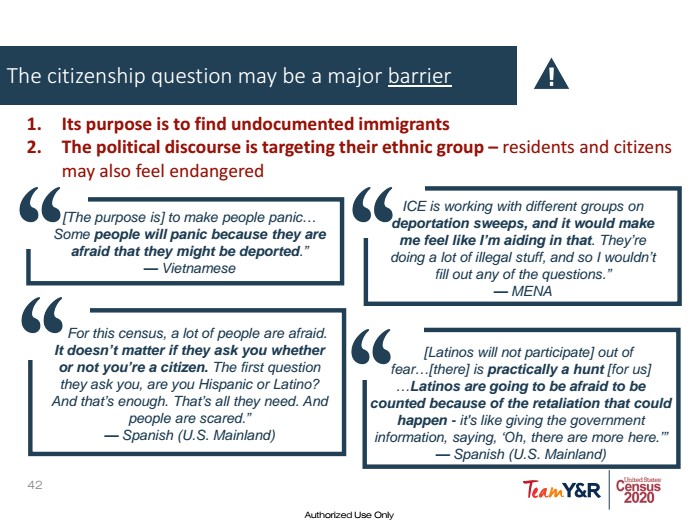 In focus groups conducted in March and April to inform the government’s outreach efforts for the census, some participants identified that question as a significant reason why they would avoid taking part in the head count.

“They tended to both believe that the purpose of the question was to find undocumented immigrants and that the political discourse is targeting their ethnic group,” explained Sarah Evans, a lead researcher at PSB, a firm that is affiliated with census contractor Young & Rubicam. “This was an idea we heard across audiences,” she added.

The administration announced the addition of the question in late March, after the study had already begun. The 30 groups asked about the question represent populations the bureau consider to be among the hardest to count, including Spanish speakers, Vietnamese speakers and people of Middle Eastern or North African descent.

This preliminary finding of the 2020 Census Barriers, Attitudes and Motivators Study was announced Thursday at a public meeting of the bureau’s National Advisory Committee on Racial, Ethnic, and Other Populations. It comes as the Trump administration is fighting six lawsuits from dozens of states, cities and other groups around the country over Commerce Secretary Wilbur Ross’ decision to add the citizenship question to forms for the upcoming head count. A trial for the two lead lawsuits in New York City is set to start on Nov. 5.

Federal law prohibits the Census Bureau from releasing any information it collects that identifies individuals until 72 years after it’s collected, although the agency can share information with the public about specific demographic groups at a level as detailed as a specific neighborhood. Census Bureau officials emphasize that individuals’ information cannot be shared with law enforcement agencies such as the FBI and Immigration and Customs Enforcement.

Still, the study, which also included a nationwide survey distributed between February and April, found that many participants did not believe that the government will keep that promise of confidentiality. The fear is particularly high among Asian and black participants, as well as those who do not have a high school diploma and those with low proficiency in English or the internet.

Close to half of the survey participants (47 percent), researchers noted, incorrectly answered a question about whether the census is used to find people living without documentation, including more than a third that responded with “don’t know.” Some U.S. citizens surveyed may feel “endangered” by the political discourse surrounding the citizenship question, the researchers’ presentation at the bureau’s headquarters in Suitland, Md., also highlighted.

Latino “participants worried that their participation in the census could harm them personally or others in their communities/households they care about,” the researchers wrote in their presentation’s slide deck.

During a focus group of Spanish speakers, a participant described the current climate as a “hunt” for Latinos.

“Latinos are going to be afraid to be counted because of the retaliation that could happen,” the participant reported. “It’s like giving the government information, saying, ‘Oh, there are more here.’ ”

During another focus group of people of Middle Eastern or North African ancestry, one participant said: “ICE is working with different groups on deportation sweeps, and it would make me feel like I’m aiding in that. They’re doing a lot of illegal stuff, and so I wouldn’t fill out any of the questions.”

The citizenship question’s purpose, a Vietnamese-speaking focus group participant said, was “to make people panic,” especially those who are afraid of deportation.

Asked by NPR how the Census Bureau plans to incorporate these findings into the communications plan for the 2020 census, spokesperson Naomi Evangelista did not provide any details but instead pointed to a blog post written by the agency’s acting director, Ron Jarmin.

“The extensive research effort yielded rich insights that will inform the subsequent stages of the communications campaign,” Jarmin wrote, adding that the study’s findings will guide advertising, social media and other efforts to encourage people to respond to the census.

The latest findings underline previously released research from the bureau that suggested that asking about citizenship status will discourage noncitizens, including immigrants living in the country illegally, from participating in the census. As a result, that could undermine the accuracy of the information gathered for the head count. Before Ross announced his decision to add the citizenship question, Census Bureau researchers advocated for a different way of producing citizenship information for the Justice Department that would generate data more accurate and less expensive than self-reported responses to a question on the census.