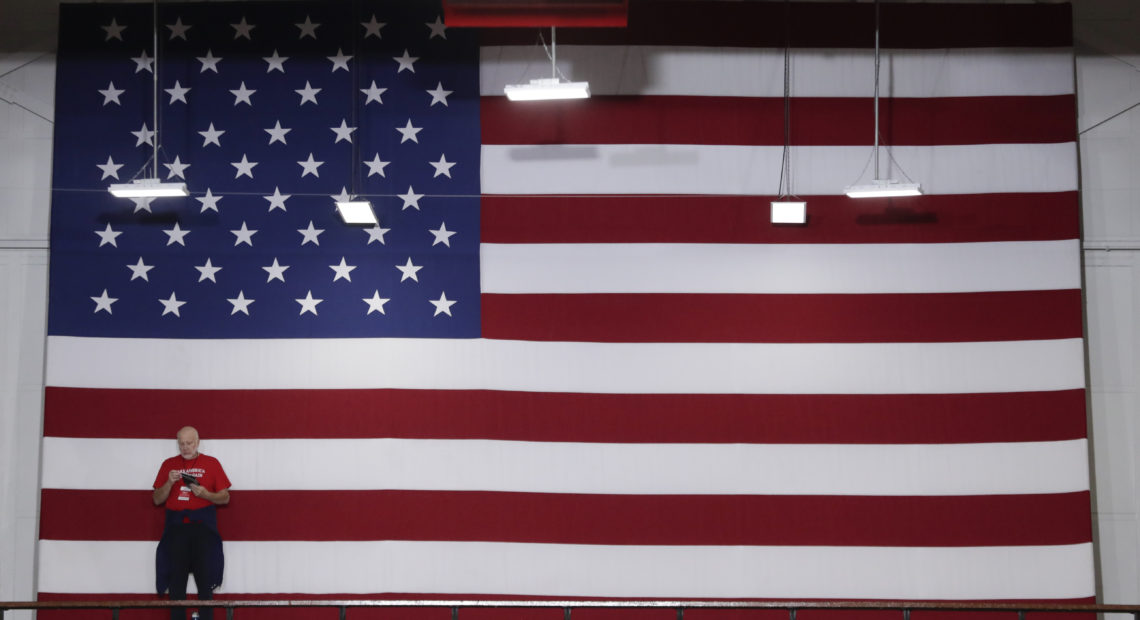 Key Questions The 2018 Election Will Answer

PHOTO: A volunteer stands in front of an American flag before President Trump speaks at a rally last week in Indianapolis. Indiana is a key Senate battleground state for the GOP. CREDIT: Michael Conroy/AP

In one respect, this is a typical midterm election — a race shaped as a referendum on the president and the party in power.

But there are so many ways in which this election is anything but typical. We’ve seen a surge in first-time candidates, especially women and minorities. In the past several midterms, the party in power was relatively complacent compared with the party hoping to be in power. Heading into Election Day, Democrats have an enthusiasm edge, but Republicans have been getting steadily amped up, too.

Plus, President Trump has embraced the referendum on himself in a way other presidents have not.

It’s a sign of tribal divisions that are driving much of what has happened in the 2018 campaign, and voters will resolve what remains to be seen — the outcome.

Here are five questions that could be answered on election night. They will determine not just who controls Congress, but how American politics changes after these consequential midterms.

1. It’s probably a blue wave, but how big and wide?

Every indicator says that Democrats have the advantage going into Election Day in the fight for the House. What’s unclear is whether the blue wave will be big enough to get Democrats the 23-seat net pickup they need to take back the House majority.

The gender gap is huge and working in their favor. Independent voters have broken strongly for the Democrats, and Democrats are raising tremendous amounts of money — in both small contributions to individual candidates and from big outside donors, like billionaire Michael Bloomberg. The size of this “green wave” of cash has surprised and worried Republicans.

But in order to make changes moving forward, Democrats must do more than just take back the House, they must do well in gubernatorial races and in the battle for state legislatures across the country.

This is key because 2020 is a census year, and redistricting is right around the corner. So Democrats want to be able to exercise some control over the state-based process of drawing congressional and state legislative district boundaries — a process they’ve been effectively shut out of in many crucial states since their big losses in 2010. That has provided a big structural advantage to the GOP ever since.

In midterm elections, the House and Senate races tend to move in tandem, but this year, they’re heading in two very different directions.

The Senate battleground couldn’t be worse for Democrats — it’s a group of red states like Montana, North Dakota, Missouri, Indiana and West Virginia, where Trump won by double digits in 2016. The president has been campaigning plenty in those places.

In those states, where incumbent Democratic senators are fighting for their political lives, the key voter is a blue-collar white man. In the battlegrounds for the House — which are in mostly affluent, highly-educated suburbs — the key voter is an angry, college-educated white woman.

When the cycle started, Republicans hoped they would pick up as many as five Senate seats, but most of these races are still very close. In only one, North Dakota, do polls show the Democrat, Heidi Heitkamp, consistently trailing by a significant margin.

But Democrats have also struggled to pull ahead in states where they had hoped to pick up seats — Nevada, the only state that Hillary Clinton won in 2016 that has an incumbent Republican senator up for re-election, is still within the margin of error, as is the open seat in Arizona.

In Tennessee, Democrats had been hopeful about Phil Bredesen, a moderate, pro-business former governor. But Bredesen has fallen behind his Republican opponent, Rep. Marsha Blackburn, in the most recent polls. Texas Sen. Ted Cruz also remains the favorite for re-election, despite the energetic and well-funded campaign of Democratic Rep. Beto O’Rourke.

The Democrats’ goal is to hold their own if they can, limiting their losses, so they’re not out of striking distance in the next two cycles, when more Republican senators are up for re-election in more purple states.

3. Can Republicans hold in the Midwest, and will young people and Latinos turn out for Democrats?

After 2016, it looked as if Trump was going to turn the battleground states of Iowa and Ohio red. But Republicans are now worrying about the Midwest — once a source of Trump’s greatest strength. GOP candidates are struggling in races up and down the ballot in those two states. And in the states that vaulted Trump to the White House — Michigan, Wisconsin and Pennsylvania — they’re not doing much better and often worse. For now, Republicans’ hopes of turning Minnesota red have been put on hold.

Democrats also have plenty to worry about. Polls show a decided lack of enthusiasm among Hispanics. That’s not a problem everywhere, but it really matters in places like Arizona, Nevada, Florida and Texas. If Democrats can’t fire up Latino voters with a nativist president in the White House doubling down on immigration, they really have some work to do.

Democrats are also concerned that young people, who polls show disapprove of Trump and his party by huge margins, may stay home (as they usually do in midterm elections) despite the surge of activism among young people after the Parkland, Fla., school shooting.

4. Can Trump transfer his popularity with his base to his party?

Every midterm is a referendum on the president and his party, and Trump has embraced that dynamic more enthusiastically than any previous president. He tells his supporters that even though he’s not on the ballot, they should vote as though he is.

In the past, presidents have had trouble transferring their popularity in midterm elections — it’s usually a president’s unpopularity that motivates the other side’s voters. Trump had no problem boosting the fortunes of the Republican candidates whom he endorsed in GOP primaries, but it remains to be seen whether he can heave any Republican general election candidate over the finish line his fall.

The single most important race this fall is … the Florida governor’s race. Florida is the mother of all swing states, and Trump realistically can’t be re-elected without it. He needs to get GOP Rep. Ron DeSantis elected governor so that all the political power that comes with that office can be used on Trump’s behalf in 2020.

Democrat Andrew Gillum has had a small, but consistent lead in that race — and Gillum may even be helping incumbent Democratic Sen. Bill Nelson in his Senate race against Rick Scott, the current GOP governor.

Once again, it’s the state to watch on election night.