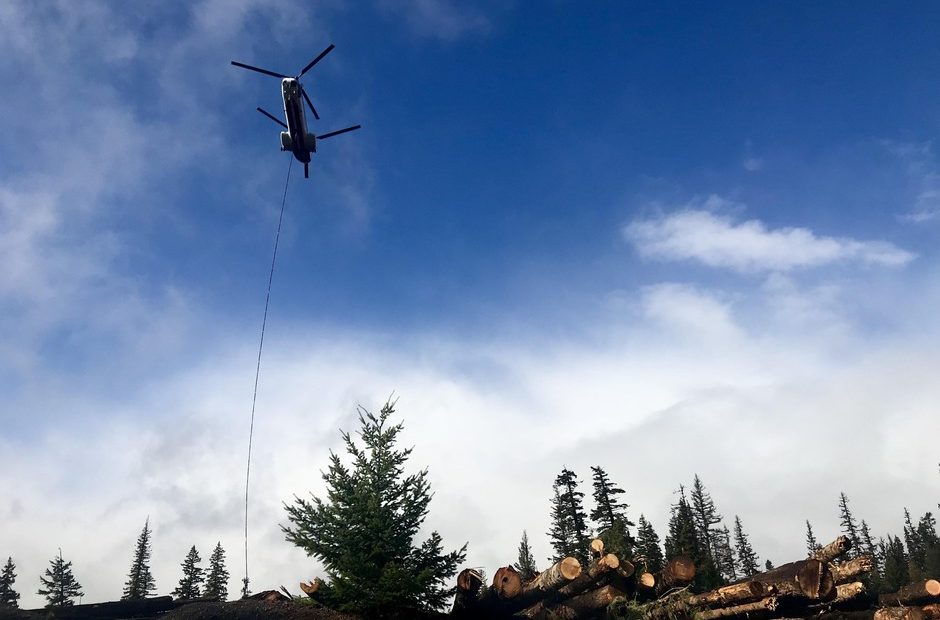 Almost 40 years ago, Scott Nicolai started his stream restoration career taking logs out of the water.

“(Back then) the fish heads — what I call the fisheries folks — we stood on the banks, and we looked at the stream. If we saw a big log jam, we thought, ‘Oh, that’s a barrier to fish. We want the stream to flow,’” Nicolai said.

Nicolai, a habitat biologist with the Yakama Nation, is working on the biggest stream restoration effort ever in the Northwest. A project that’s putting more than 6,000 logs back into remote streams across Central Washington.

The logs will create nooks and crannies where salmon and bull trout can swim and spawn. 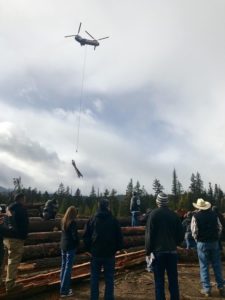 People watch on as a helicopter lifts logs into the air. CREDIT: COURTNEY FLATT

“That wood is providing complexity in the water. It’s providing cover. It’s creating pools and storing gravel that fish spawn on. Then there’s aquatic insects that are crawling all over that wood, eating the algae that grows on the wood. It’s a critical part of the system,” Nicolai said.

The project spans more than 24 miles of streams on the Yakama Reservation and on ceded land owned by private landowners, the U.S. Forest Service and the Washington departments of Fish and Wildlife and Natural Resources.

The rivers and streams have faced historic mismanagement from overgrazing, railroad and splash dam logging and biologists “cleaning streams out.”

“We’re trying to learn from our mistakes and find a better way to manage,” said Phil Rigdon, director of the Yakama Nation Department of Natural Resources.

To take on a project this size, and to reach areas that no longer have roads, the groups are using a helicopter to fly logs from a staging area and place them in the water. It’s the easiest and cheapest way to complete the restoration.

Biologists use pink and blue flagging tape to guide the pilots. The helicopter blades can be heard from a distance, alerting everyone to move out of the way.

But first, the pilot has to pick up the logs from the staging area. A long cable dangles from the large helicopter. The pilot gently attaches it to four full-size logs below and pulls up. He then flies them about a 1.5 miles away to a section of the Little Naches River where roads no longer reach.

These logs — a mix of Douglas fir, grand fir and cedar — come from a timber harvest The Nature Conservancy was using to thin forests far upland.

“We’re thinking more towards whole landscape restoration, both the aquatic and the upland,” said Reese Lolley, director of forest restoration and fire for the Nature Conservancy in Washington. “How are we restoring forests? How are we managing forests? And then how do we take some of the wood that’s coming off and putting it into streams for floodplain restoration?”

The helicopter also helps reach timber that they couldn’t otherwise get to, Lolley said.

“We’re able to source wood from areas where there’s not access,” Lolley said. “And so there’s a forest restoration need, but we’re not able to (otherwise) access or move that wood because it’s just not feasible or economical to put roads there.” 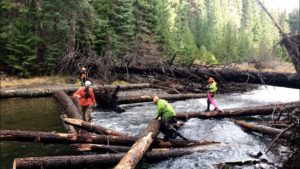 Biologists use pink and blue flagging tape to signal to the helicopter pilots where logs should be placed. There are 1,000 logs to be placed in the Little Naches River.
CREDIT: COURTNEY FLATT

Some of this wood that’s now being used for habitat restoration could have been marketable timber. Other logs wouldn’t have been sold.

Lolley said the thinning will help reduce the risk of mega-fires. Then, instead of leaving that wood in the forest or selling the timber, the wood will help restore fish habitat downstream.

The project is funded by eight different agencies, including the Bonneville Power Administration. It’s helped along by six different partner organizations, including The Nature Conservancy and Mid Columbia Fisheries Enhancement Group.

“This project is what will keep our creeks from running dry,” said Kelly Clayton, a habitat biologist with Yakama Nation.

That’s because the logs will slow the river flow down, allowing it to pool and soak into the water table. The Yakama Nation’s Scott Nicolai likens these areas to sponges.

The wood helps spread water onto the floodplains and allows them to soak up water and slowly release it into the stream. That stores extra water and cools down warming water.

“Back in the day, when they ran bulldozers down the creek, cleaning it out, making the water run off faster, that disconnected these floodplains from the river,” Nicolai said. “We used to treat our streams like they were just for drainage — get the water off the land. Now we’re learning that’s not such a great idea.”

Nicolai said this type of water storage is vital as the climate warms.

Heading toward the Little Naches River, the group hikes through a dry streambed.

“I walk across these dips, and I just get excited. If I see gravel in these,” he said, brushing wet leaves away with his foot, “then I think this is where salmon used to be and hopefully will be again in the future.”

For tribal leaders, that’s the point of these projects. On the banks of the Little Naches as a helicopter whirled overhead, they held a ceremony and said a prayer — that this project will be successful and the land will return to what it once was.

“It was very simple: to bring what was rightfully part of this land back to us,” said former tribal chairman Jerry Meninick.