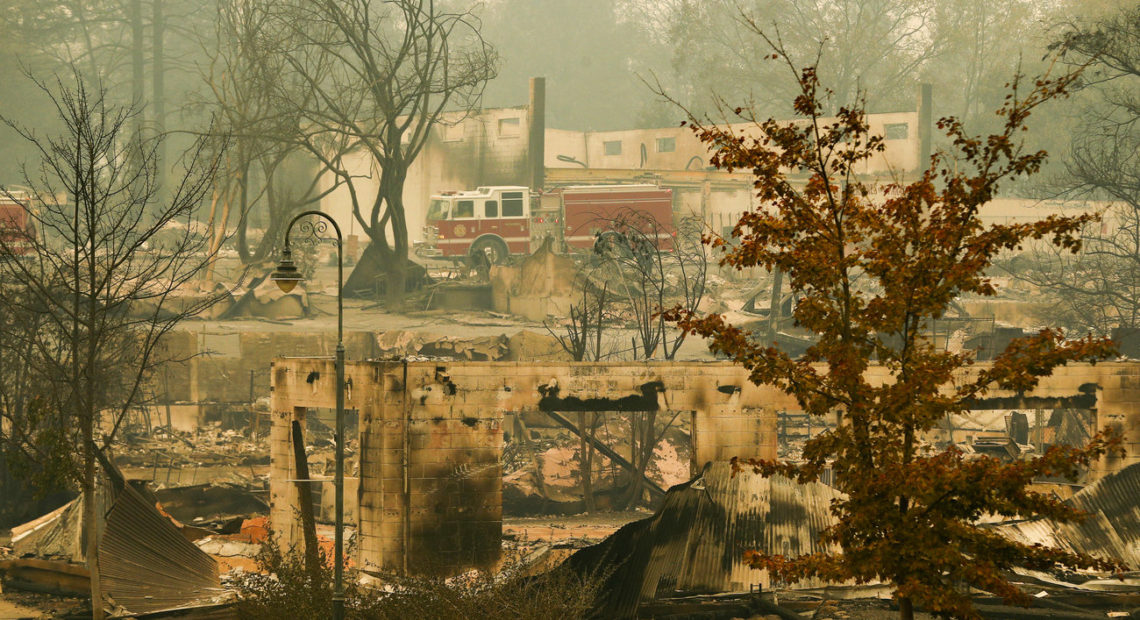 A fire truck drives through an area burned by the Camp Fire in Paradise on Tuesday, Nov. 14, 2018.
CREDIT: John Locher/AP

More than 1,000 people are listed as missing in the wake of the Northern California wildfire known as the Camp Fire, authorities say. It’s a number that has ballooned rapidly and is expected to continue to fluctuate. The Butte County Sheriff’s Office had said on Thursday evening there were 631 people unaccounted for.

However, that number may include people who escaped to safety and do not realize they are being searched for.

The death toll also rose after eight sets of remains were discovered on Friday. At least 71 people have died in the fire, which has burned through more than 220 square miles of land and consumed the town of Paradise.

The fire is the deadliest, and the most destructive, in California history. Nearly 10,000 homes have been destroyed.

Authorities say at least 63 people died in the Northern California wildfire known as the Camp Fire, which has burned through at least 218 square miles of land and consumed the town of Paradise. Seven sets of remains were discovered on Thursday.

Others are still missing, though official numbers have fluctuated wildly. The Butte County Sheriff’s Office said late Wednesday that 130 people were missing; on Thursday evening, the list had grown to 631.

Sheriff Kory Honea told reporters at a news conference Thursday evening that the ballooning of the list of missing people was the result of staff combing back through calls that came in during the beginning of the fire emergency. Honea said that when the blaze erupted one week ago, “the chaos we were dealing with was extraordinary.”

He added that the number of unaccounted-for people is likely to keep fluctuating as cases are resolved and as new calls come in from people looking for friends and relatives.

In a strange tangent to the ongoing search for victims of the fire, officials announced that law enforcement officers on Thursday had shot and killed a fugitive in a staging area used for fire operations.

District Attorney Michael Ramsey told reporters at the news conference that the man had been sought by authorities since July. The man was pointed out by a civilian, Ramsey said; officers confronted him, followed him in a high-speed car chase, and then stopped him with spike strips that flattened the tires of his sedan.

The man removed his hand from his right pocket and pointed a metallic object at the officers, Ramsey said. Six officer shot him, and the man was pronounced dead at the scene. A police dog was killed by friendly fire, and a dog that the man had in his car, which had attacked the police dog, was shot and killed as well. 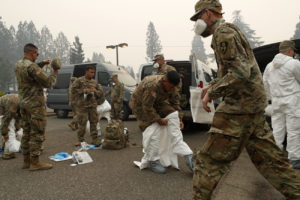 Members of the California Army National Guard put on protective suits before searching for victims of the Camp Fire in Paradise, Calif., on Wednesday, Nov. 15, 2018.
CREDIT: John Locher/AP

Days after the flames swept through Paradise, dense smoke still hangs over this town whose residents are mostly gone. They fled to nearby towns along traffic-choked roads leading away from the small California community which was popular with retirees.

Over the last few decades, Paradise grew somewhat haphazardly — a place where you could find affordable housing in a state where that’s hard to come by. As the town expanded, more houses were built in a landscape known to be fire-prone.

Now the streets of Paradise are busy only with trucks from Pacific Gas & Electric and those of relief workers looking for the bodies of those who could not escape the blaze.

Search and rescue teams gather in the parking lot of the Tall Pines bowling alley, which is somehow still standing. Among them are members of the California Army National Guard, police officers from around the state, volunteers, cadaver dog units and anthropologists who specialize in human remains.

They enter neighborhoods marked by an eerie silence. The houses there have been incinerated.

James Gaebe, a resident of Paradise, went with his wife, Lisa, to assess the damage. He looked at the place where his house used to stand.

“Nothing left,” he told NPR’s David Greene. “Basically just a bunch of rubble and metal everywhere. Cars wasted. Personal belongings completely gone. I basically got out with the clothes on my back and my pickup. That’s all I have.”

“We knew it was coming,” Gaebe said. “Everybody’s been saying for years, when this town goes up, it’s going up. And it went up.” 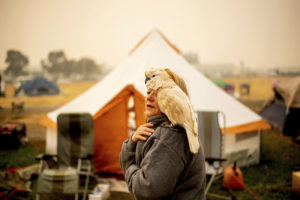 Suzanne Kaksonen and her cockatoo Buddy camp at a makeshift shelter outside a Walmart in Chico, Calif. on Nov. 15, 2018. Kaksonen, a resident of Paradise, lost her home in the blaze.
CREDIT: Noah Berger/AP

Paradise had prepared for fire, Mayor Jody Jones told NPR — though not necessarily for one as massive as this.

“We had a very robust evacuation plan,” she said. “We used that plan, and I think it saved hundreds of lives because we had practiced it. We even took one of our peak morning hours and made the road a contraflow, so we could show our citizens how it was going to work. What happened, though, is typically you are evacuating a zone or two or three zones. You’re not evacuating an entire town all at the same time.”

Jones estimated that 90 percent of the town’s residential buildings have been destroyed.

Now, she said, Paradise looks “like a war zone.”

“I would say about 90 percent of the homes in the residential neighborhoods are gone,” she said. “Now, the business district, I would say, is more like 50 percent.”

In retrospect, she said, there were a few things the town might have done differently.

“I think that possibly we could have done more education of people. If you have a landline, you automatically receive those calls that say ‘evacuate immediately.’ If you have a cellphone, you had to register them. Maybe we could have done better there ’cause I’ve heard from a lot of people who did not get those messages on their cellphones. And it’s probably because they didn’t register.”

Many of the town’s residents are now at shelters in nearby Chico. Others have set up camp in a Walmart parking lot, where they are living in tents. One man there said a woman had invited him to go into the store with her and paid for what he needed — a sleeping bag, a tent.

It’s not clear yet how many of town’s 27,000 residents will return and rebuild. So much of Paradise lies in ashes.

And then there’s the possibility of another fire.

“We still have conditions that could produce new and damaging fires,” Ken Pimlott, director of the California Department of Forestry and Fire Protection, told Reuters late Wednesday. “We are not letting our eye off this ball at all.”