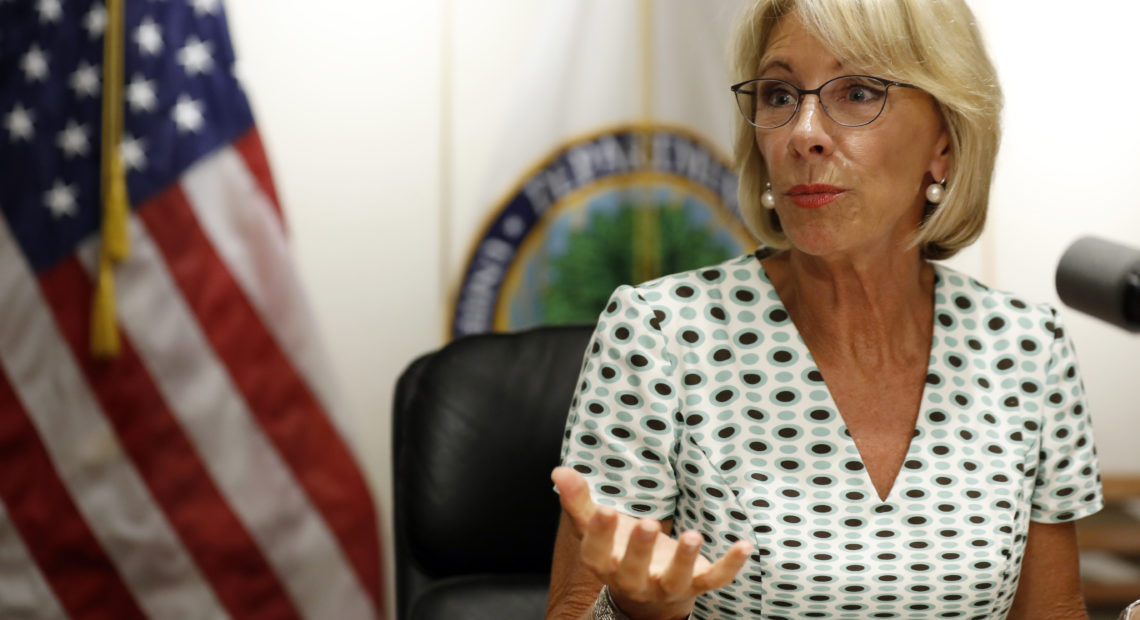 PHOTO: Education Secretary Betsy DeVos speaks with reporters after a series of listening sessions about campus sexual violence in July 2017. Among the significant changes is that schools can make it harder to prove allegations. CREDIT: Alex Brandon/AP

Education Secretary Betsy DeVos announced sweeping rules on how colleges handle cases of sexual assault and harassment that she says will fix a “failed” and “shameful” system that has been unfair to accused students. In what the administration is calling a “historic process,” the proposed rules aim to significantly enhance legal protections for the accused and reflect a sentiment expressed by President Trump that men are unfairly being presumed guilty. More than a year in the making, the rules replace Obama-era policies on how to implement Title IX, the law barring gender discrimination in schools that get federal funding.

The new rules are drawing both applause and anger.

Among the most significant changes is that schools can make it harder to prove allegations by raising the level of proof needed. Instead of requiring only a “preponderance of the evidence,” as the Obama administration had directed, schools could demand “clear and convincing evidence.” And many schools may well be forced to raise the bar, since the regulations also require that the standard for students be the same as that used for faculty and staff.

The rules do not go into effect until they go through a public comment period, which could be a long process and could result in more changes.

Under the new regulations, students also would be guaranteed the right to cross-examine each other. That was discouraged under the Obama administration. To minimize retraumatizing victims, the regulations would bar student-to-student confrontations, requiring instead that questions be asked by a third party, such as the accused student’s attorney.

“We expect that the proposed regulations will be a dramatic improvement,” says Samantha Harris, director of policy research at the Foundation for Individual Rights in Education. She applauds the administration for “recognizing that schools must provide meaningful procedural protections to accused students when adjudicating such serious offenses.”

But victims’ advocates lambasted the new rules, saying they will have a chilling effect on reporting, as survivors will not want to subject themselves to such a difficult process.

“It demonstrates Betsy DeVos and the Trump administration share the same attitude about assault that we saw from Senate Republicans during the Kavanaugh hearing — disparage and diminish survivors and discourage them from reporting,” says Jess Davidson of the group End Rape On Campus.

Combined with other proposed changes, she says, this would mark a return to a time when “rape, assault and harassment were swept under the rug.” Her group already is organizing protests.

The Trump administration proposes “reasonably prompt” time frames for investigations but does not specify how long they should take, as the Obama administration had, and they would allow informal dispute resolutions that were previously banned, including mediation.

And while the new regulations encourage schools to offer supportive measures to a victim, such as a no-contact order, they also would bar any such measures that would “burden” or punish an accused student while an investigation is pending or if he or she is found to be not at fault. For example, a no-contact order would have to apply mutually to the accuser and the accused. The Obama administration directed schools to “minimize the burden on the complainant.”

Critics also complain that the new regulations let schools off the hook in too many cases. The administration says it wants to make sure “only objectively serious behavior is actionable.” Under the new regulations, colleges would only have to investigate the most egregious cases of sexual harassment. The Obama-era definition of “unwelcome conduct of a sexual nature” would be significantly narrowed to include only sexual misconduct that is “so severe, pervasive and objectively offensive” that it denies a person access to a school’s education program or activity.

For some colleges, the new rules are bringing at least some sense of relief. Many welcome the new clarity — so they know their obligations and can limit their risk of ending up under government investigation. But as the new regulations would make the college process a little more court-like with lots of procedural requirements, that also makes things more onerous for schools.

Unlike the Obama-era guidelines, when DeVos’ new rules are implemented, they will have the force of law without having been approved by Congress.