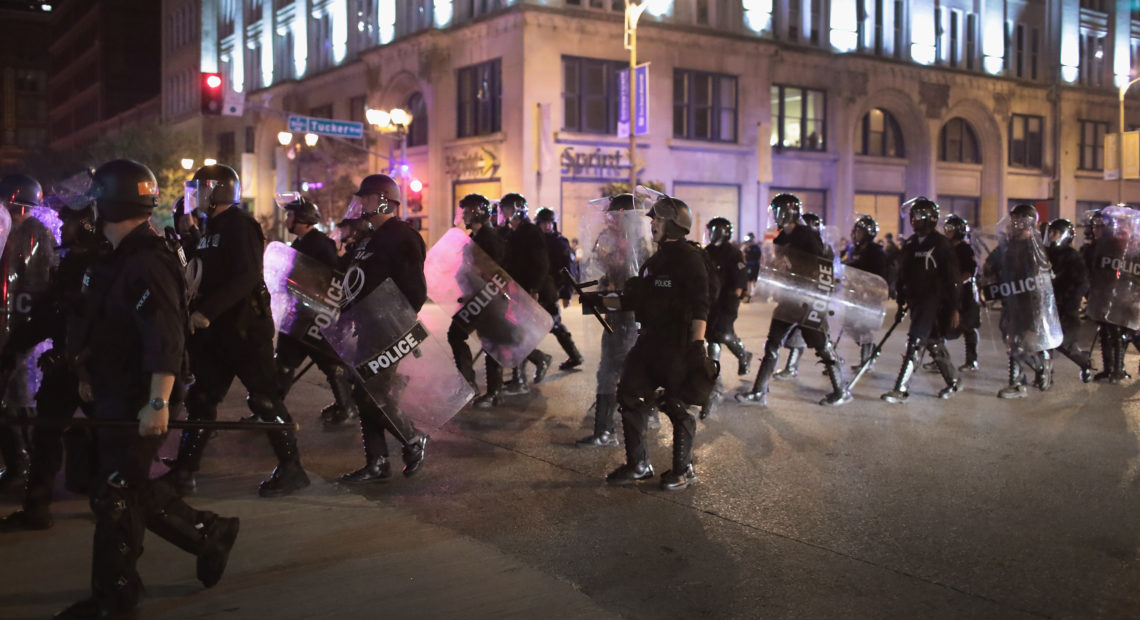 PHOTO: Police respond on Sept. 17, 2017, in St. Louis to demonstrators protesting the acquittal of former St. Louis police officer Jason Stockley, who had been charged with first-degree murder in a 2011 on-duty shooting. A federal grand jury has indicted three officers who responded to the protests in the beating of a fourth officer, who was working undercover that night. CREDIT: Scott Olson/Getty Images

A federal grand jury indicted three members of the St. Louis Metropolitan Police Department on charges of beating a fellow police officer who was working undercover during a 2017 protest. A fourth officer also was indicted and accused conspiring to cover up the incident.

The Department of Justice announced the indictments in a statement Thursday.

According to the indictment, officers Boone, Hays and Myers inflicted “bodily injury” on an undercover officer identified in the court document only as “L.H.”, an officer and detective who is described as having 22 years of experience with the police department. The beating of L.H. occurred “while he was compliant and not posing a threat to anyone.” The incident occurred during a September 17, 2017, protest against the acquittal of a white police officer who was tried in the death of a black suspect in 2011.

The indictment includes what appears to be text messages among three officers before the protests in which they talk about their plans to beat protesters.

The fourth officer, Bailey Colleta, is accused of aiding in a cover-up by lying to the grand jury investigating the incident. Colleta and Hays were romantically involved at the time of the protests and during the federal investigation, according to the indictment.

All four officers were suspended without pay, according to city officials cited by the Associated Press. Each of the officers faces potential maximum penalties of at least 20 years in prison.

The federal investigation, announced in November 2017, came after local political and religious leaders denounced alleged heavy-handed tactics by police against protesters angry about the September 2017 acquittal of white former police officer Jason Stockley. He was charged with first-degree murder in the 2011 shooting death of Anthony Lamar Smith after a car chase.