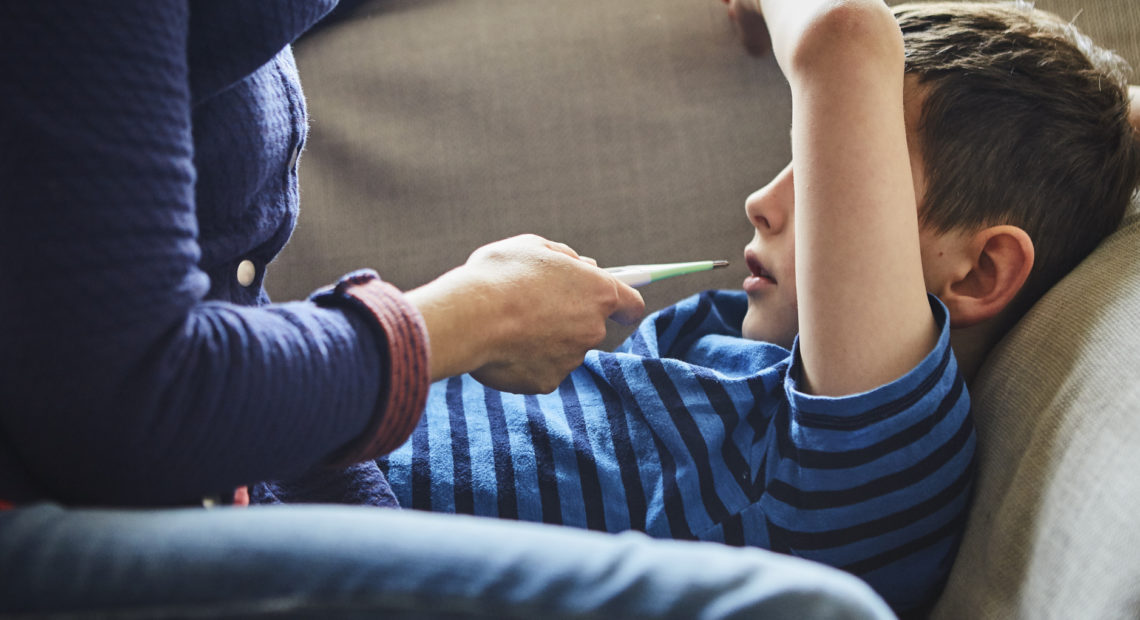 Infections May Raise The Risk Of Mental Illness In Children

Researchers have traced a connection between some infections and mental illnesses like schizophrenia, depression and bipolar disorder. New research from Denmark bolsters that connection. The study, published Thursday in JAMA Psychiatry, shows that a wide variety of infections, even common ones like bronchitis, are linked to a higher risk of many mental illnesses in children and adolescents.

The findings support the idea that infections affect mental health, possibly by influencing the immune system.

“This idea that activation of the body’s immune inflammatory system as a causative factor in … select mental illnesses is one that has really caught on,” says Dr. Roger McIntyre, a professor of psychology and pharmacology at the University of Toronto, who wasn’t involved in the study. “This study adds to that generally, but builds the case further in a compelling way.”

In the new study, the researchers gathered data on hospitalizations and prescription medications for the 1.1 million children born in Denmark between Jan. 1, 1995, and June 30, 2012.

“We could follow individuals from birth, so there was no missing information during the study period,” says Dr. Ole Köhler-Forsberg of Aarhus University Hospital, a neuroscientist and one of the authors of the study.

Köhler-Forsberg and his colleagues used two national registries — one to get data on hospitalizations because of severe infections like pneumonia and another for data on antimicrobial or antiparasitic medications prescribed to children for less severe infections. “Most of them are those infections that you and I and all others have experienced,” says Köhler-Forsberg.

While the majority of kids in the sample had some of kind of infections, only a small portion of them were diagnosed with any kind of mental illness. About 4 percent were diagnosed with conditions like schizophrenia, attention deficit hyperactivity disorder, anxiety and personality disorders. And a total of 5.2 percent were prescribed medications for mental disorders.

For all mental illnesses — excluding depression and bipolar disorder — the team found that being hospitalized for an infection was associated with a 84 percent higher risk of subsequently being diagnosed with a mental health disorder at a hospital and a 42 percent increased risk of being prescribed a medication for mental illness.

Less serious infections, treated in an outpatient setting with an antibiotic, antiviral, antifungal or antiparasitic medications were associated with a 40 percent greater risk of getting a mental illness diagnosis in a hospital and a 22 percent higher risk of getting a prescription.

However, the increased risk for mental illness following infections was less dramatic when the authors did an additional analysis to look into the influence of genetics and the home environment. The authors compared outcomes for more than 800,000 siblings in this population — siblings that did have infections with ones who did not. In this analysis, they found that the increased risk for mental illness following hospitalization fell to 21 percent (from 84 percent). Similarly, the risk of being prescribed a psychotropic medication following hospitalization fell to 17 percent.

But the risk didn’t drop to zero, notes Köhler-Forsberg. “That’s also another finding that made us more confident that there is some link between infections, or the immune system and mental disorders,” he says.

The authors also found that the risk for getting a mental disorder was the highest within the first three months following an infection.

Previous studies have also illustrated a connection between infections and mental illness, says McIntyre. For example, a 2013 study by a couple of members from the current research team showed that hospitalizations due to autoimmune disorders and infections were associated with an increased risk of mood disorders like depression and bipolar in adults.

Similarly, influenza in pregnant women has been linked with an increased risk of schizophrenia in their children. Other studies have found that other infections are also associated with schizophrenia.

But the mechanism underlying the link is still not fully understood. One theory that’s supported by various studies is that infections contribute to mental illness by activating the body’s own inflammatory response.

A subset of people with various mental illnesses, from schizophrenia and depression to autism and bipolar disorder, have what is called a “pro-inflammatory balance,” says McIntyre. In other words, their bodies are in a state of inflammation.

“What we’ve struggled with for a long time is … is this [inflammation] causing the mental illness, or is it a consequence of the mental illness?” says McIntyre. The new study suggests that it’s the former, because the researchers were able to show that the diagnoses of mental illness came shortly after the infections.

However, inflammation isn’t the only route for infections to influence mental health. In some cases, pathogens themselves might be the culprits, says Köhler-Forsberg.

“Some infections start as a peripheral infection in the body and can cross the blood-brain barrier and come into the brain, and thereby cause damage and increase the risk of mental disorders,” he says.

One well-known example is a parasite called Toxoplasma gondii, which spreads, among other ways, through contact with contaminated cat feces.

This pathogen was unlikely to have been involved in the cases in this new study, says Dr. Lena Brundin, an associate professor at the Van Andel Research Institute in Grand Rapids, Mich., who wrote an accompanying editorial to the new study. However, she says, “we know that the parasite can go to the brain and be associated with some psychiatric symptoms later in life.”

“We have seen that patients with Toxoplasma gondii can be more suicidal,” she adds.

The parasite affects the brain’s function, including the production of dopamine, says Brundin. “It can also cause localized inflammation in the brain.”

The herpes virus is also known to cross the blood-brain barrier and stay dormant inside neurons, and get reactivated years later.

Another way in which infections, or treatment for an infection, can influence mental health could be by changing the gut microbiome, write the authors of the new study. “It is very difficult to say how or why because we don’t [fully] understand how microbiome works,” says Köhler-Forsberg.

Some antibiotics are also known to go into the brain, notes McIntyre, so they might have some direct impact, too. The new study found that of all medications given to the children for their infections, antibiotics were associated with the highest risk of a subsequent diagnosis of mental illness. More “judicious use of antibiotics” could decrease some of that risk, he says.

As for parents, McIntyre, Brundin and Köhler-Forsberg caution that the results don’t mean that every child who develops an infection will become mentally ill.

“You should rest assured that the great majority of these kids are not going to go on and develop a mental illness,” says McIntyre. After all, infections are necessary for the normal development of the immune system.

That said, parents should be on the lookout for signs of anxiety, behavioral problems or any other potential symptoms of mental illness following an infection, notes Köhler-Forsberg. If they notice anything in their child, they should immediately seek help, he adds.

“If a child should be so unlucky to develop any mental problems, then we know that [in most cases] when it gets detected early and treated in a good way, then the child will get better again,” he says.