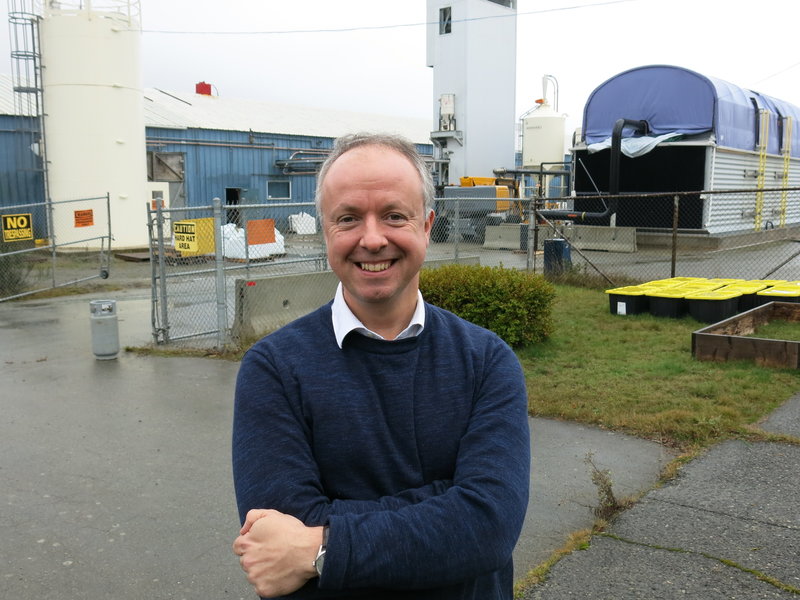 Taking Carbon Out Of The Air And Reusing It: Company Aims To Address Climate

At a major climate meeting in Poland, nearly 200 countries are trying to reach a deal on dramatically reducing carbon emissions. But a recent U.N. report found that may not be enough to avoid dangerous impacts from the warming climate. In fact, the world is falling so far short of what’s needed, it said, that it might be necessary to pull massive amounts of carbon dioxide out of the air.

The problem is that there’s no feasible — let alone economical — way to do that yet. But there are a number of efforts underway to find one, including in the small, picturesque town of Squamish, British Columbia, an hour’s drive north of Vancouver.

Carbon Engineering has been working for nearly a decade on the technology behind a “direct air capture” pilot plant, which sits just outside its office. 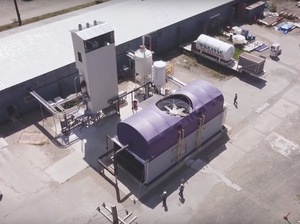 The process of capturing CO2 starts with an “air contactor,” which looks like an oversized semitrailer with a huge fan on top. In front there’s a black grill with a solution containing potassium hydroxide flowing down it, so it sounds like a waterfall. Once the solution meets the air, it captures and retains carbon dioxide.

That may sound simple, but it’s not. Even though scientists say there’s too much CO2 in the atmosphere now, it’s at a very small concentration — only about 0.04 percent.

“So you have to pull in a huge volume of air to get that CO2, and that’s really the trick to direct air capture,” says Jenny McCahill, a chemist and engineer who works for Carbon Engineering.

Next, more chemicals are added and the solution is heated to create white pellets that look like the filling in bean bag chairs. These contain about 50 percent CO2. 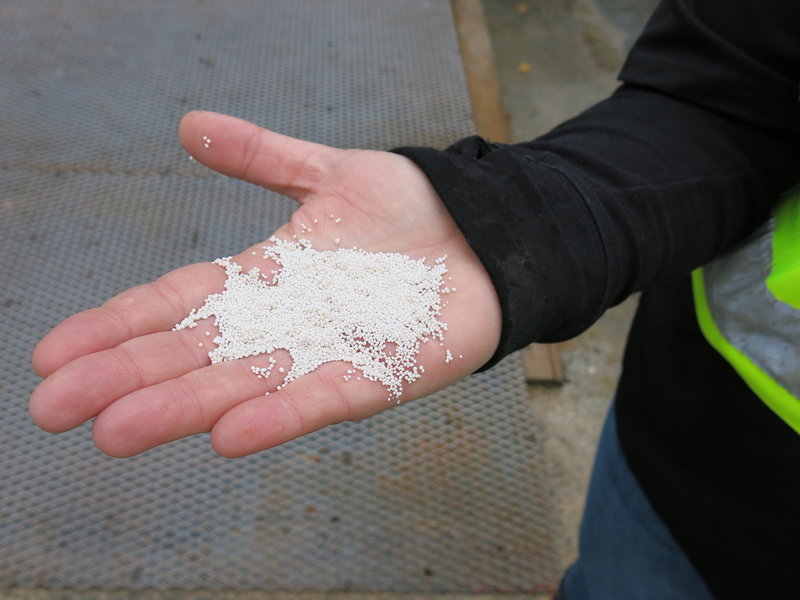 Then the pellets are heated to 900 degrees Celsius (1,652 degrees Fahrenheit) to further concentrate the CO2 into a gas.

At this point the company could inject that underground. That’s one way to address climate change. But there’s no business model for that right now, and Carbon Engineering is looking for profits to help its technology expand.

To that end, it combines the CO2 gas with hydrogen extracted from water and makes a clear, synthetic fuel that McCahill says is similar to crude oil.

“It’s a lot purer, so we don’t have impurities like sulfur and nitrogen components that end up with that soot when you combust,” she says.

Once this fuel is put through a refinery, McCahill says it can be turned into products such as gasoline, diesel and jet fuel.

But burning those emits carbon dioxide, so essentially carbon would just be moved around instead of reduced in the atmosphere. Still, the company argues there’s an environmental benefit.

“We capture it again the next day and we make more fuel out of it,” says company CEO Steve Oldham. “So the CO2 becomes recycled, and consequently there’s no additional emissions from using fuel.”

That’s because Carbon Engineering’s fuel would replace carbon-intensive fossil fuels. But that cleaner fuel comes with a cost.

“If we were to sell our fuel directly at the pump today, we’re about 20 percent more expensive than regular gasoline,” Oldham says.

Right now you can’t buy this fuel, though, because the company’s pilot plant removes just one ton of CO2 from the air each day and produces only about two barrels of synthetic fuel. But Oldham says his company is ready to start building larger plants.

With investors that include Bill Gates, Carbon Engineering has spent $30 million perfecting this process. The company says it can extract carbon dioxide from the air for less than $100 a ton, a claim two other companies, Climeworks and Global Thermostat, also make.

But some experts are skeptical this can be done that cheaply. It takes a lot of energy to move that much air and heat to concentrate the CO2. And energy costs money.

“The reality is, it’s a lot cheaper to keep CO2 out of the air than to capture it once we get it into the air,” says Howard Herzog, senior research engineer at the Massachusetts Institute of Technology Energy Initiative. He thinks reducing emissions makes more economic sense than direct air capture technologies.

But many scientists argue it’s too late to rely only on reducing emissions, with mounting projections of dire consequences from climate change.

“Certainly, in light of the recent climate reports, we don’t have the option of simply avoiding carbon emissions any more. We now are at a point where we need to start removing CO2 directly from the atmosphere,” says Jennifer Wilcox, chemical engineering professor at Worcester Polytechnic Institute.

Wilcox says this technology shouldn’t be seen as the one solution to climate change. But combined with many other efforts, she thinks it could make a valuable contribution.

Still, Wilcox and others say the technology needs more research and development.

“I see this industry similar to the renewable energy industry, maybe 20 or 30 years ago,” says Carbon180 Executive Director Noah Deich. His group in Oakland, Calif., advocates for an economy that removes more carbon than it emits.

“I think an even bigger opportunity on the policy front is in California,” Deich says. The state’s Low Carbon Fuel Standard includes a carbon trading program for transportation fuels such as gasoline. That could be a big boost for Carbon Engineering’s fuel. 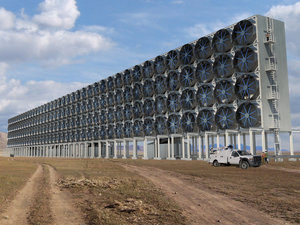 A rendering of Carbon Engineering’s full-size air contactor design. The company says this unit would be one of several that would collectively capture 1 million tons of CO2 per year. CREDIT: CARBON ENGINEERING

Carbon Engineering’s Oldham also wants more governments to put a price, or tax, on carbon dioxide emissions. “It will force companies that have a carbon footprint today to find ways to mitigate that carbon footprint, and we’re a very good way of doing so,” he says.

Oldham says his company plans to soon build its first full-size plant, one that will remove much more carbon dioxide from the air and run on renewable energy. (The pilot plant uses natural gas.)

If all goes well, he hopes it will become a model for many more such plants in the near future.