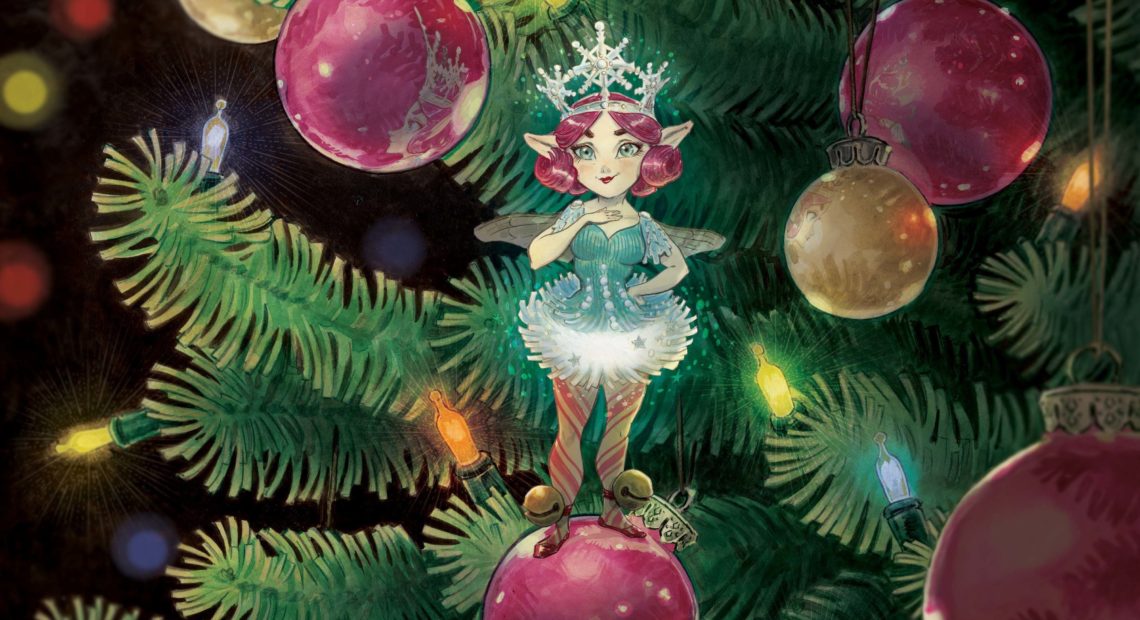 PHOTO: Illustrator Tony DiTerlizzi based The Broken Ornament’s Christmas fairy Tinsel on his wife, Angela, who helped with the book. CREDIT: Tony DiTerlizzi

Some of the best stories begin at home — and in fact, that’s where Tony DiTerlizzi got the idea for his latest book. The Caldecott Award-winning author and illustrator, perhaps best known for The Spiderwick Chronicles, is taking a big leap into the unknown with his first Christmas book, The Broken Ornament. 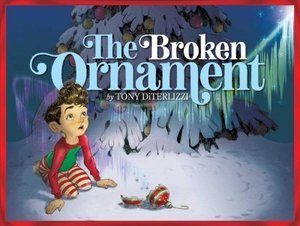 The Broken Ornament by Tony DiTerlizzi

He says it all began a few years back when his family was getting their house ready for the holiday. Decorating the tree is a beloved annual tradition; they gather in their library listening to Christmas music and sipping hot chocolate while they all hang ornaments on the tree. Sophia DiTerlizzi was just eight years old when her mom brought home a new box of ornaments. She and her dad remember what happened next.

“I went to hang one up and it broke,” she says.

“That sound is unmistakable, that kind of pow, popping loud explosion,” Tony continues. Sophia was scared; the broken ornament was right by her feet and there were shards scattered everywhere. “And I could see the look on her face,” Tony says. “She looked a little bit braced for, oh gosh, what’s going to happen. She felt bad.”

“And then,” Sophia says, “My dad says every time an ornament breaks, a Christmas fairy is born.”

Her dad says he doesn’t know where that thought came from — it just popped into his head. But his wife Angela was watching and listening to the whole exchange. “And she had these like giant eyes and she’s looking at me and she goes, that’s your next book,” Tony remembers. “And I’m like no, no, no, come on, come on, Charlie Brown’s Christmas is playing, and we got hot cocoa and we’ll clean that ornament up later. She’s like, no, no, no — that’s your next book.”

Tony DiTerlizzi wasn’t sure, but then he posted a photo of the broken ornament on Instagram with the story about the fairy. He got a huge response, which made him think people would like the book. “As an author, you look for those universal experiences as a basis for a story,” he says. “If people can enter your story through a very universal experience, then you can send them into flights of fancy, or fantastic worlds and stuff, which is obviously what I like to do.”

So in the book, Sophia morphs into a little boy named Jack, who wants more of everything at Christmas. In his eagerness to decorate, he breaks an ornament that meant a lot to his mother. The fairy who emerges from the broken ornament helps him understand what’s really important about Christmas. Her name is Tinsel, and she’s based on Angela DiTerlizzi — who helped her husband with the book.

“What was she going to be?” Angela asks. “Who was Tinsel? And I think as soon as we started having conversations about who she was, we realized that she was actually pretty sassy, and I would kind of voice her, and Tony said, ‘Uhh, you’re Tinsel.'”

Tony DiTerlizzi’s illustrations grow more fantastic and lush as Tinsel fills Jack’s living room with Christmas trees and elves, reindeer, snowmen, nutcracker soldiers — and more. He says creating the book was tricky, “because there’s so many classics that we know and love. But there’s really none about a Christmas fairy. Like, holy cow, maybe we might’ve found a little thing that’s different.”

Above all, there was one person DiTerlizzi hoped to please — Sophia, who’s now 11. “I really like it,” she says, “and I like that it was inspired by me but it doesn’t incorporate me in it. I really like that it has a different family, but the same story.”

And yes, Sophia does have her own favorite ornament. But it’s made of felt and doesn’t break.