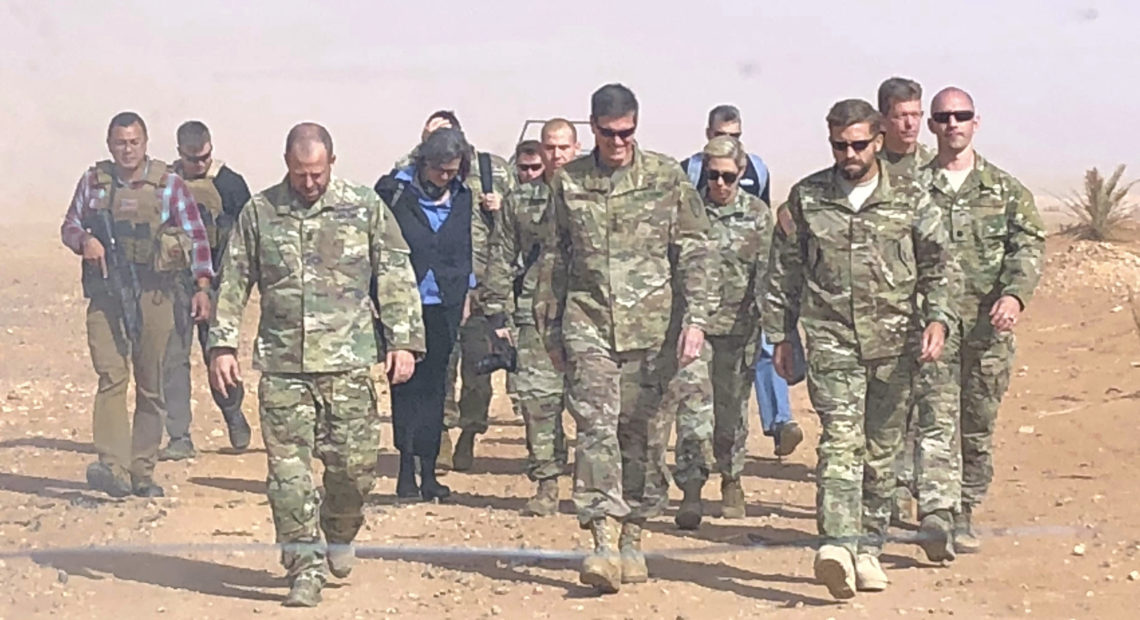 After U.S. Troops Leave Syria, What Happens Next?

PHOTO: U.S. Gen. Joseph Votel (center), the top U.S. commander for the Middle East, visited a military outpost at al-Tanf in southern Syria, where the U.S. trains Syrian opposition forces, in October. President Trump is planning to withdraw the U.S. forces from Syria, according to a Pentagon official. CREDIT: Lolita Baldor/AP

A limited U.S. military role in Syria has had an outsize impact over the past four years.

With airstrikes and ground forces, the Americans and their Kurdish partners systematically pushed the Islamic State from almost all its territory. The U.S. helped stabilize the northeast region of the country, where civilians are returning to areas now controlled by the Kurds. While the larger war grinds on, with no end in sight, the American presence is seen as placing at least some restraints on the Syrian military.

But President Trump says it’s now time for the U.S. forces to leave. He hinted at such a move with a Wednesday morning tweet: “We have defeated ISIS in Syria, my only reason for being there during the Trump presidency.”

He followed up with a video on Wednesday evening: “We’ve beaten them and we’ve beaten them badly. We’ve taken back the land and now it’s time for our troops to come back home.”

The move goes against even recent statements by top American military officials, who have consistently said they think it would be wise to stay, as well as Republicans and Democrats who are sharply criticizing the president.

“I think it’s a grave error,” said Sen. Marco Rubio, a Florida Republican. “I think our adversaries around the world are going to go to our partners and allies and say, ‘You see, America’s unreliable.'”

The president has also faced mounting Republican criticism on another key Middle East policy — his approach to Saudi Arabia. The kingdom has come under intense criticism after the killing of Saudi journalist Jamal Khashoggi.

Trump came into office saying he wanted to swiftly defeat terrorist groups in the Middle East and bring American forces home from conflicts in the region.

He has essentially carried on with President Obama’s policy in Syria, launched in 2014, when ISIS was at its peak, and defined by an aggressive bombing campaign and a small number of U.S. forces who work with the Kurds and other U.S. partners. The U.S. has an estimated 2,000 troops in Syria, mostly in the northeast.

Dismantling ISIS has been an important achievement, and has come at a far lower cost compared to other U.S. military engagements in the region.

But the president’s critics say a withdrawal risks losing many of these gains.

“Just because President Trump tweets that he has defeated ISIS doesn’t make us safer,” Sen. Jack Reed of Rhode Island, the senior Democrat on the Senate Armed Services Committee, said in a statement. “The president continues to disregard the advice of his military, diplomatic and intelligence personnel who have consistently warned against the action the president seems poised to take.”

An ISIS revival: As a fighting force, ISIS has been reduced to small pockets in the east of the country, near the border with Iraq. Recent fighting has focused in and around the eastern town of Hajin, on the Euphrates River.

The fear is that if the U.S. pulls out, the ISIS fighters who have scattered may regroup and return as a powerful force. The group emerged rapidly in 2013-2014, taking over large parts of Syria and Iraq, where the government and security forces were weak.

An emboldened Bashar Assad: A U.S. departure would make Syrian President Bashar Assad feel more secure in his grip on power. The Syrian military has avoided direct contact or provocations that could turn the American forces against him.

The U.S. military has, in effect, assisted Assad by greatly weakening one of his most dangerous enemies, ISIS. This has allowed Assad to focus his military forces on other threats, and he has defeated most of them. If the Americans depart, he could look to reclaim other parts of the country he’s lost during the past seven years of war.

Iran and Russia claim a victory: Iran has invested heavily with military and economic assistance to prop up Assad since the beginning of the war. Russian President Vladimir Putin sent military forces to support Syria in 2015, the year after the U.S. entered the war.

Both Iran and Russia would view it as a major success if the American military leaves and Assad continues to consolidate power. The same would be true for Hezbollah, the Lebanese group that has fought alongside Assad’s forces.

Turkey launches offensive against the Kurds: While the U.S. has partnered with the YPG, the Syrian Kurdish militia, Turkey’s President Recep Tayyip Erdogan views them as terrorists who threaten his country. Turkey has signaled it wants to launch an offensive in northern Syria against the Kurdish group. Such a move could destabilize a mostly calm area, displacing civilians and touching off new refugee flows.

U.S. abandons an ally: Kurds throughout the Middle East have felt abandoned by the U.S. on multiple occasions in the past, and were hoping for better this time after waging some of the toughest fighting against the Islamic State. But a U.S. pullout raises the prospect of the Kurds fending for themselves against the Syrian military on one side and and the Turkish forces on the other.

More broadly, a U.S. departure would likely be viewed as part of a larger U.S. military and political drawdown in the region after so many years of frustrating, inconclusive fights.

Greg Myre is a national security correspondent who reported from the Middle East for more than a decade. Follow him @gregmyre1.