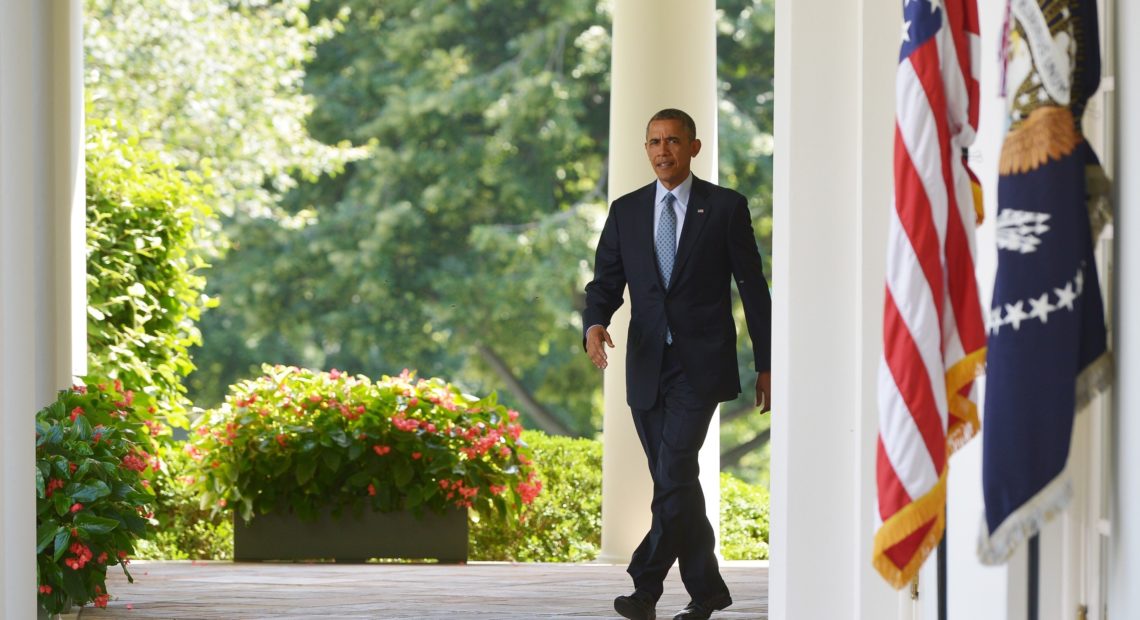 President Obama Also Faced A ‘Crisis’ At The Southern Border

PHOTO- President Obama spoke on immigration at the Rose Garden at the White House on June 30, 2014. CREDIT: MANDEL NGAN/AFP

In a nationally televised address from the White House, the president warned about an “actual humanitarian crisis on the border” prompted by a surge of migrants from Central America, and urged Congress to take action on his immigration agenda.

The year was 2014, and the president was Barack Obama.

Tuesday night, President Trump addressed the nation on what he also called a “growing humanitarian and security crisis” at the border. Nearly five years ago, Obama gave his remarks in the Rose Garden, rather than the Oval Office, and the government was not partially shut down over border security.

Still, the situations at the border and in the White House — then and now — are strikingly similar, and immigration experts say the Trump administration can learn from Obama’s tenure. Though the lessons depend on your perspective.

Immigrants’ rights advocates say Trump should emphasize efforts to provide humanitarian aid to migrants arriving at the southern border, while immigration hardliners say Trump should be careful not to create a system that acts like a magnet for Central American migrants.

Like the current White House, the Obama administration struggled to find the right response to a dramatic increase in the number of migrants fleeing violence and poverty in Central America.

More than 60,000 unaccompanied children arrived at the southern border in 2014, most from the Northern Triangle countries of El Salvador, Honduras and Guatemala, putting the Obama administration in a difficult position.

“They made a lot of mistakes, but eventually they got some stuff right,” said Michelle Brané, who directs the Migrant Rights and Justice program at the Women’s Refugee Commission.

“They started out with sort of a deterrence approach, but realized fairly early on that this was a humanitarian situation,” Brané said.

Democrats and immigrants’ rights advocates also have criticized the Trump administration’s reaction to the latest wave of children and parents from Central America arriving at the border.

More than 25,000 members of family units were apprehended at the U.S.-Mexico border in November, the highest monthly total since at least 2012. Officials with Customs and Border Protection say the agency isn’t equipped to handle such large numbers of women and children.

“The fact is the women and children at the border are not a security threat,” said House Speaker Nancy Pelosi in her televised response to the president’s speech Tuesday night.

“They are a humanitarian challenge — a challenge that President Trump’s own cruel and counterproductive policies have only deepened,” Pelosi said.

When the surge of migrant children began arriving in 2014, the Obama administration tried some of the same tactics as the Trump administration.

The Obama administration housed migrant children in temporary camps on military bases. And it pushed for long-term detention of migrant families while their asylum cases played out in immigration court, though federal courts blocked that policy.

But then, those tactics shifted. Under Obama, the federal government eventually spent billions of dollars in response to the migrant surge. For instance,the administration greatly expanded the network of shelters contracted by the Department of Health and Human Services that house unaccompanied children. These shelters house the children until they can be placed with a parent or other relative already living in the U.S.

According to Michelle Brané, the Obama administration deserves credit for learning from its mistakes.

“The Trump administration has done basically the opposite,” Brané said. “They took exactly what failed, and expanded on it.”

While the Obama administration would sometimes separate migrant families in detention, especially in cases in which the parent was deemed unsuitable, Brané pointed out the the Trump administration regularly separated families before abandoning the policy last year. Under Trump, nearly 3,000 children were separated from their parents under a “zero tolerance” policy against illegal border crossings.

And under Trump, the network of shelters for unaccompanied children nearly reached capacity of 15,000 before the administration relaxed new rules for vetting the adult sponsors, making it easier for children to be released to live with their family members while they await their day in immigration court.

Immigration hardliners argue that the Obama administration was too lenient with migrant families and children, by releasing them from detention and allowing them to live in the United States while their immigration cases were pending.

However well-intended those policies might have been, immigration hawks say they acted as an invitation to more migrants from Central America to make the same trip to the U.S.-Mexico border.

“Obama’s administration blasted a range of loopholes that, collectively, incentivized illegal immigration, no doubt about it,” said Dan Stein, the president of the Federation for American Immigration Reform, which advocates for lower levels of immigration.

Back in 2014, Obama used his bully pulpit to urge a divided Congress to advance an immigration overhaul bill — and threatened to change immigration policy through executive action if it didn’t.

That approach didn’t persuade Congress then, and efforts to pass a broader immigration package died. Now Trump is calling on a divided Congress to approve funding for his controversial border wall. If the past is any guide, it may not work for him, either.