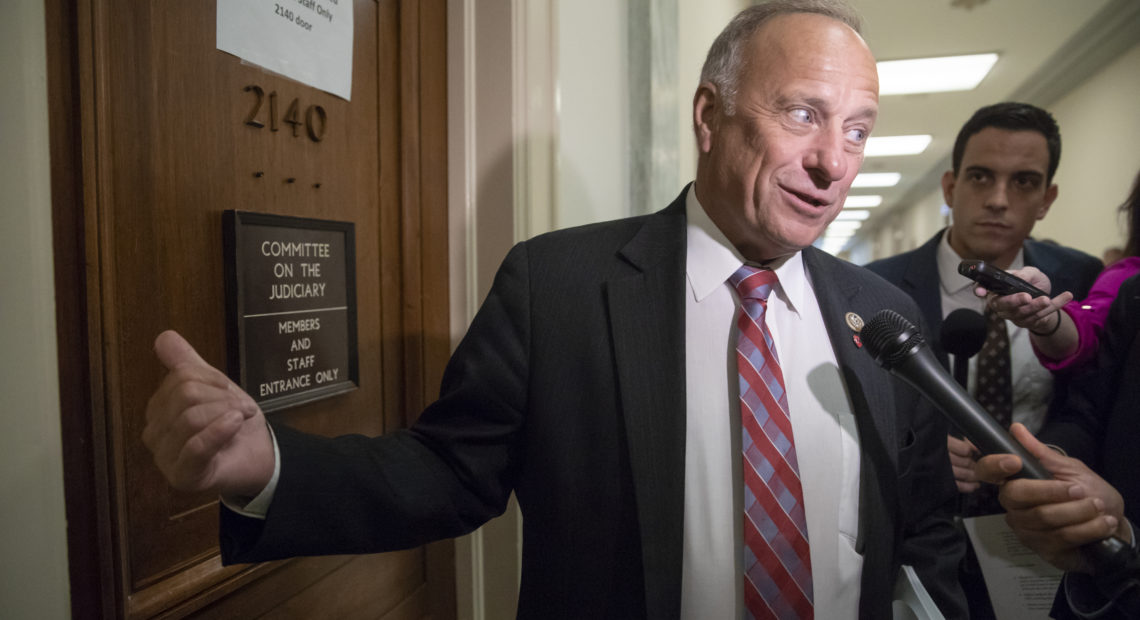 House Republican leaders moved Monday to remove Republican Rep. Steve King of Iowa from two House committees as a punishment for his recent comments in a New York Times interview where he questioned whether “white supremacy” and “white supremacist” were offensive terms.

“We will not be seating Steve King on any committees in the 116th Congress,” House Minority Leader Kevin McCarthy, R-Calif., told reporters after the House Republicans who handle committee assignments met Monday night and voted to strip King of his positions. He was a member of the House Judiciary and Agriculture Committees.

“Leader McCarthy’s decision to remove me from committees is a political decision that ignores the truth,” King said in reaction to the decision — a response that seemed to invoke his remarks on the House floor Friday where he denied being a racist. “Under any fair political definition, I am simply an American nationalist,” King had said Friday.

Monday, top House and Senate GOP leaders also condemned King’s comments, which were the latest is a string of racially charged remarks he has made during his 16 years in Congress.

Separately, House Democratic leaders are planning on a vote of disapproval of King’s comments as early as Tuesday on the House floor. Some Democrats are seeking to censure King, a move that would be a stronger public admonition of the controversial Republican lawmaker.

House Minority Leader Kevin McCarthy, R-Calif., had promised “action will be taken” against King for his latest offering in a well-documented history of making racially charged or racially insensitive remarks.

“I’m having a serious conversation with Congressman Steve King on his future and role in this Republican Party,” McCarthy told CBS’s Face the Nation Sunday. “I will not stand back as a leader of this party, believing in this nation that all are created equal, that that stands or continues to stand and have any role with us,” McCarthy also said on the TV program.

At least three House Democrats — Bobby Rush of Illinois, Tim Ryan of Ohio and House Majority Whip James Clyburn — announced Monday they plan to introduce resolutions to censure or reprimand King. Rush’s resolution includes a list of 14 controversial comments King has made going back to 2006. A censure resolution is a way for the House to issue a public rebuke of a lawmaker’s words or action, but does not carry with it any additional punishment if it is approved.

In a statement, Rush chastised King’s GOP colleagues for tolerating King’s series of controversial comments. “Republicans, in the interest of political expediency, sought his endorsement, ignored his racist remarks, and continued to elevate him to positions of influence,” Rush said, “Only now that his behavior is well known to those outside the beltway and tainted him politically, do they vigorously denounce him.”

“There is no place in the Republican Party, the Congress or the country for an ideology of racial supremacy of any kind,” McConnell said, adding, “I have no tolerance for such positions and those who espouse these views are not supporters of American ideals and freedoms. Rep. King’s statements are unwelcome and unworthy of his elected position. If he doesn’t understand why ‘white supremacy’ is offensive, he should find another line of work.”

President Trump sidestepped a question about King in remarks to reporters ahead of a trip to New Orleans on Monday. “I haven’t been following,” Trump said.

King has represented a northwestern Iowa district for 16 years, during which time he has carved out a vocal role as a hard-liner on immigration and a self-described nationalist with a record of making controversial remarks. The latest confrontation surrounds comments he made in an interview last week with the New York Times in which he was quoted questioning why the terms “white nationalist” and “white supremacist” have become offensive.

There was an immediate pushback on and off Capitol Hill, and on Friday King took to the House floor to say he regretted talking to The Times and denied he was a racist. “I want to make one thing abundantly clear, I reject those labels and the evil ideology that they define,” he said. “Under any fair political definition, I am simply an American nationalist.”

King has a well-established history of controversial rhetoric, and the latest incident comes as many within the GOP are already seeking to distance themselves politically — or defeat him in 2020. Iowa GOP Gov. Kim Reynolds announced she would not support King in his next primary after he narrowly won re-election against a Democrat in a safe Republican seat in 2018. She said she told the congressman: “You need to decide whether you want to represent the values of the Fourth District or to do something else.” King is already facing a primary challenge from state Sen. Randy Feenstra.

Sen. Tim Scott, R-S.C., a rising star in the party and one of two African-American Republicans in Congress, wrote a Washington Post opinion column in which he chastised the party for not doing more to improve relations with minority communities. “Some in our party wonder why Republicans are constantly accused of racism — it is because of our silence when things like this are said,” he wrote, “Immigration is the perfect example, in which somehow our affection for the rule of law has become conflated with a perceived racism against brown and black people.”

Democratic leaders and members of the Congressional Black Caucus also had denounced King, as they have done in the past. In a statement, the CBC called on Republicans to revoke King’s committee assignments, including his perch on the House Judiciary Committee. “Republicans should make clear Mr. King is no longer welcomed in their party or Congress,” CBC Chairwoman Karen Bass, D-Calif., said in a statement, “Anything less than these substantive actions is another tacit acceptance of racism from the Republican Party.”