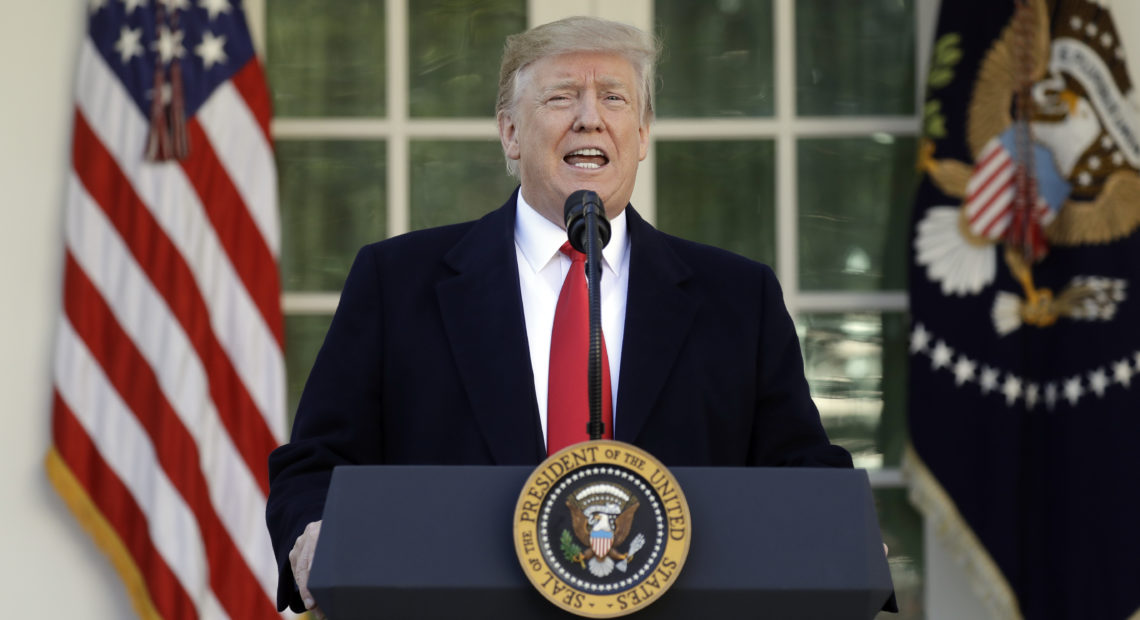 PHOTO: President Trump speaks in the Rose Garden of the White House on Friday, saying he will endorse a short-term spending deal to end the government shutdown. CREDIT: Evan Vucci/AP

President Trump has endorsed a bipartisan deal that could end the 35-day partial government shutdown, making a way for a three-week stopgap funding measure to reopen shuttered agencies.

“I am very proud to announce today that we have reached a deal to end the shutdown and reopen the federal government,” Trump said in the White House Rose Garden.

The proposal backed by congressional leaders would fund the government through Feb. 15. The deal does not right now include funding for the wall along the Mexican border President Trump has pushed for, a House Democratic source says.

But that the three-week spending bill would would also include a deal to move forward on the longer-term Department of Homeland Security funding bill without any wall money, the source said. Federal employees who have been working without pay or are furloughed would also get back pay as part of the agreement.

The Senate would vote first on the agreement, and Trump said he has instructed Senate Majority Leader Mitch McConnell, R-Ky., to put it on the floor immediately.

The breakthrough comes as federal workers missed their second paycheck in a row on Friday, now going without their salary for more than a month. The prolonged stalemate has pushed the nation’s security and infrastructure to the brink, with significant flight delays at major airports due to FAA and TSA absences escalating on Friday. The FBI has also warned, with their agents limited and working without pay, critical crime-fighting measure are also being curtailed.

Trump and Republicans have long maintained any deal to end the shutdown must include funding for the border wall the president wants, which was his key promise during the 2016 campaign. But Democrats said they should reopen the government and then resume talks, which is essentially what this reported deal would do.

On Thursday, Sen. Lindsey Graham, R-S.C., a Trump ally who has also pushed for major changes to the nation’s immigration laws, pushed for a similar deal, writing on Twitter Thursday that he was working on a short-term, three-week funding bill “that includes a down payment on wall/barrier funding and Democratic priorities for disaster relief showing good faith from both sides.” But Democrats said that would be another non-starter.

The possible end to the month-long quagmire comes after both parties have remained resolute in their stances, even as roughly 800,000 federal employees have without two paychecks — and many have struggled to make mortgage or rent payments, provide food for themselves and their families and pay other bills including utilities.

The FBI Agents Association has detailed how national security has been harmed by the protracted shutdown, making the argument in a recent report that “financial security is national security.” Transportation Security Administration workers have increasingly called in sick, slowing down security at some airports across the country.Trump signaled Thursday he might be open to a compromise, especially after his proposal to reopen the government with full funding for his border wall in exchange for three years of legal status and other protections for those affected by the Deferred Action for Childhood Arrivals (DACA) program and those with Temporary Protected Status (TPS) failed in the Senate.

In fact, the plan proposed by Senate Minority Leader Chuck Schumer, D-N.Y., which would have been a short-term funding measure through Feb. 8 with additional disaster aid but no money for the wall, had more members vote for it in the GOP-controlled Senate than Trump’s plan did.

Senate Majority Leader Mitch McConnell, R-Ky., and Schumer continued negotiations after the votes, and Trump told reporters he could approve of a possible deal if the two leaders reached one.

“It depends on what the agreement is,” Trump said. “If they come to a reasonable agreement I would support it.”