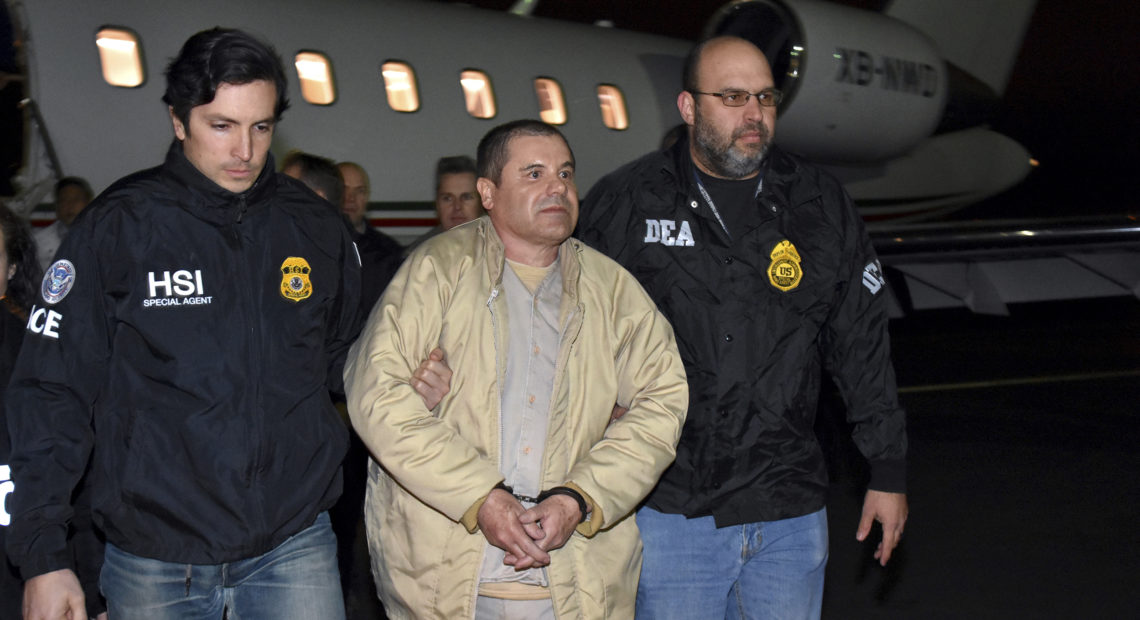 The trial for Joaquín “El Chapo” Guzmán, who stands accused of leading one of the world’s most infamous drug trafficking organizations, has unfolded like a television drama.

In laying out her closing argument on Wednesday — day 37 of the trial — Assistant U.S. Attorney Andrea Goldbarg presented the jury with a montage of images and intercepted audio which, she said, explicitly laid out how drugs were transported, how police were paid off and how violence coursed through the cartel with Guzmán at its helm.

“You heard it from his own words,” she told the jurors, tying the recordings and weeks of witness testimony to her methodical presentation. “This is the defendant running his empire.”

Guzmán jotted down notes on a yellow pad and passed them to his legal team, at one point appearing to run out of paper.

The day started with a line of reporters at the Brooklyn, N.Y., courthouse. Prosecutors brought 14 large cardboard boxes, AK-47s, bazookas, a bullet-proof vest and a La Comadre chili can.

Guzmán’s trial began in November, and the 61-year-old initially faced a 17-count indictment. The counts were later reduced to 10 and accuse him of leading a criminal enterprise, trafficking drugs from South America to the United States, laundering the proceeds and using firearms.

He faces life in prison if convicted.

For weeks, federal prosecutors have called dozens of witnesses to the stand, painting a picture of a ruthless kingpin whose illicit career took off in the 1980s and strengthened amid bribes, kidnapping, torture and assassinations.

One witness, a bodyguard and hit-man, told jurors Guzmán personally beat and executed victims – including a man who was shot and “was still gasping for air” when workers buried him.

Vicente Zambada Niebla, the son of Guzmán’s former business partner Ismael “El Mayo” Zambada, said in court that his father had a monthly budget of up to $1 million for paying off corrupt officials in Mexico.

Christian Rodriguez, an IT specialist, described how he set up encrypted communications and spy software for Guzmán to obsessively monitor his wife, a mistress and cartel workers. Rodriguez subsequently cooperated with the FBI to reveal the messages he had helped to conceal.

Prosecutors shared recordings in which Guzmán could be heard instructing workers to make sure allies in the police force were paid and not fired from their jobs.

Prosecutors also shared text messages with his wife, Emma Coronel Aispuro, as the couple discussed drug smuggling and law enforcement evasion, as well as their twin daughters. “I’m going to give her an AK-47 so she can hang with me,” he said about one of his daughters.

A former drug cartel lieutenant testified that Guzmán’s wife played a major role in the drug lord’s escape from Mexico’s Altiplano prison in 2015, “giving us his messages” on her husband’s behalf.

He also said the drug lord dreamed of directing a movie about his life years ago. He had hired a Colombian producer and anticipated an accompanying book.

The testimonies gave insight into how the cartel operated. “We learned how the cartel used submarines to smuggle drugs up from Colombia to Mexico,” New York Times reporter Alan Feuer told NPR. “We learned that they then crossed those drugs into the United States in everything from trains with secret compartments to tractor trailers where the drugs were stuffed in between pallets of frozen meat.”

The prosecution also submitted a document that claimed Guzmán had been $20 million in debt, not exactly a wealthy cartel mastermind.

Guzmán himself told the court he would not to testify.

At the trial’s start, one of his defense lawyers, Jeffrey Lichtman, argued that El Chapo was a “mythical” figure who had been framed by Ismael Zambada, the true head of the Sinaloa cartel. He also accused the Mexican government of taking bribes, which a spokesman called completely false and defamatory.

U.S. District Judge Brian Cogan told Lichtman, “Your opening statement handed out a promissory note that your case is not going to cash.” Cogan granted a prosecution motion to prevent the defense from claiming that Zambada paid off the Mexican government to target Guzmán.

Defense lawyers tried to chip away at witnesses’ credibility. Most had confessed to crimes they were previously charged with before the defense could expose them.

As the Los Angeles Times reported, most witnesses said they expected their sentences to be reduced for giving testimony. Some said they were on the stand because they hated Guzmán for trying to kill them.

At one point in the trial, Guzman waved at Mexican actor Alejandro Edda, who plays him in the Netflix series Narcos. He had come to watch the drug lord with the crowd.

Guzmán pleaded not guilty in 2017, after he was extradited from Mexico. Prior to the extradition, he escaped from prison two times: once purportedly in a laundry cart, and once through a mile-long tunnel which his associates secretly excavated.

The act of transporting Guzmán to the Brooklyn, N.Y., courthouse has been elaborate: each time he leaves a correctional facility in Manhattan, the government assembles scores of U.S. marshals and other law enforcement officers. He moves in a motorcade of marked and unmarked police cars, armored cars and other emergency response vehicles. The government orders the closing of the Brooklyn Bridge and repeats the process as the caravan returns.

Security at the courthouse has heightened, with snipers, drug-sniffing dogs and a federal marshal patrolling the courtroom, Feuer told NPR.

Judge Cogan chose to protect the identity of the jurors for their safety.

“Given the totality of the evidence that’s come across so far, it’s hard to see them taking long to [reach] a guilty verdict,” Keegan Hamilton, U.S. editor for Vice News, told NPR.

The defense is expected to make closing arguments on Thursday, followed by the prosecutors’ rebuttal and the jury’s deliberations.