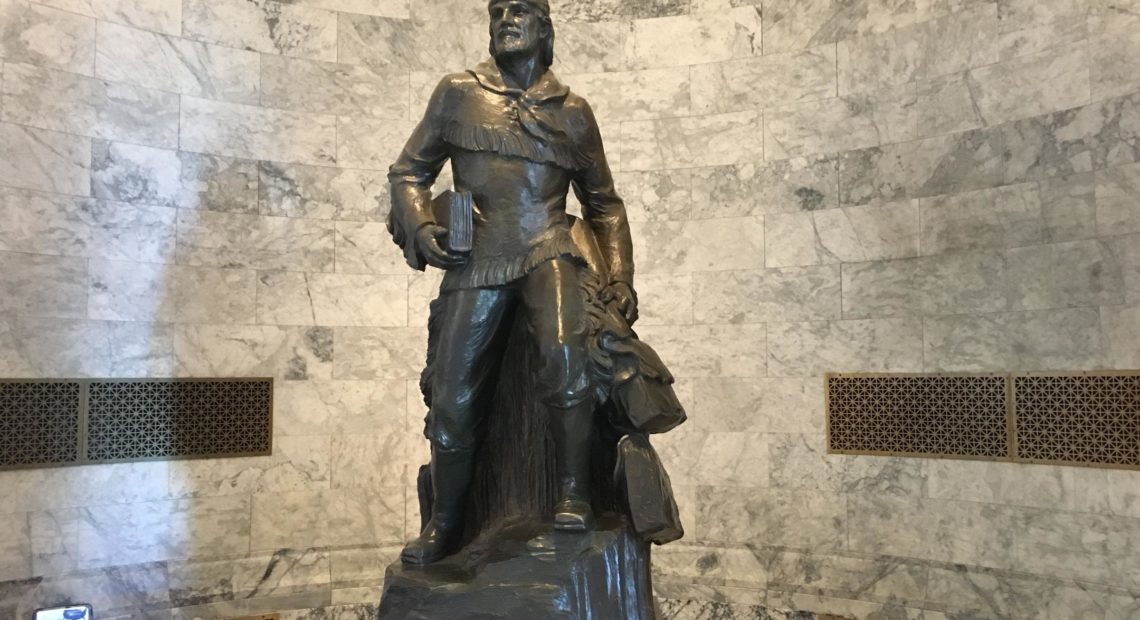 A proposal to remove the larger-than-life statues of pioneer missionary Marcus Whitman from the Washington state capitol and the U.S. Capitol drew angry responses during an initial legislative hearing in Olympia this week.

A Whitman College graduate, a history buff from Touchet, Washington, and several state senators strongly objected to what one of them portrayed as “whitewashing history.”

Marcus Whitman helped lead one of the first wagon trains into the Oregon Territory in 1836. The establishment of the Whitman Mission in the Walla Walla Valley — followed by his family’s death about a decade later during an attack by a Cayuse band — made the minister and doctor a legendary figure in the history of the Pacific Northwest.

Whitman’s arrival in the Northwest, along with waves of other settlers, upended ways of life for Native communities. Displacement, armed conflict and forced assimilation for Native peoples followed. But the proposal mentions none of this historical context. The legislation states that Whitman “does not meet the standards of being one our state’s top honorees” and does not go into detail as to why.

Democratic state Sen. Reuven Carlyle of Seattle treaded carefully around the history when he urged his fellow senators to create a work group to recommend an appropriate figure to replace Whitman in Olympia and Washington, D.C. The identical bronze statues of the buckskin-clad Whitman depict him in a heroic pose with Bible in one hand and satchels in the other.

“We have so many great leaders who have impacted our state,” Carlyle added. “I think there is recognition of the role that [Whitman] played in the founding our state, but I also think that we are changing as a society and there is a lot of benefit from having that discourse about where we want to go in the years ahead.”

In addition to being the namesake of the elite college in Walla Walla, Marcus Whitman’s name is affixed to a half dozen public schools from Port Orchard to Spokane. A county in eastern Washington, a glacier on Mount Rainier, a fancy hotel in Walla Walla and a national forest in northeast Oregon are also named after him. The Whitman Mission historical site and family grave are a unit of the national park system.

Carlyle did not specify any names of notable citizens who could be enshrined in Whitman’s place. One name that has repeatedly come up in conversation though is the late Native rights activist Billy Frank, Jr.

“He didn’t try to change anyone’s religion or status or rights,” said attorney and Yakama Nation member Elmer Ward by email about Frank. “He just advocated for the dignity and rights of Natives.”

Whitman’s defenders said the Presbyterian missionary was one of the “cleanest” historical figures of his time who helped settlers, orphans and Natives alike.

“It was a very different time than we have now, and this bill presumes to do a character assassination of someone who existed 170 years ago,” testified Rowland Thompson, a veteran lobbyist who said he was speaking as a Whitman College graduate. “I think there will be significant blowback from this.”

Democratic state Sen. Dean Takko acknowledged that Whitman’s place in history is complicated by the backdrop of colonialism and devastating reprisals that followed the massacre at the mission. But he doesn’t want to open a Pandora’s box.

“In 50 years do we take another lens and look at whoever we pick today?” asked Takko. “You know, he was an important part of history. To kind of just wipe it off like it never happened — or he never happened — I kind of have a problem with that.”

After hearing all of the public testimony, State Government Committee Chair Sam Hunt predicted the statue replacement measure would stall, despite the fact that he co-sponsored the measure with Carlyle.

Each U.S. state is allowed to memorialize two figures in the National Statuary Hall Collection. Washington’s second statue in the U.S. Capitol depicts a kneeling Mother Joseph, a Catholic nun who founded hospitals and schools. Oregon’s two statues on Capitol Hill have the potential to raise similar issues as Whitman’s, as they honor the “Father of Oregon” John McLoughlin and pioneer missionary Jason Lee.

There is precedent for switching out statues in the U.S. Capitol’s National Statuary Hall. North Carolina lawmakers have started the process to replace the statue of a race-baiting former governor, Charles Aycock, with a statue of the evangelist Rev. Billy Graham. In 2015, Arizona replaced the statue of war veteran and mining pioneer John Greenway with a statue of former U.S. Senator and GOP presidential nominee Barry Goldwater.