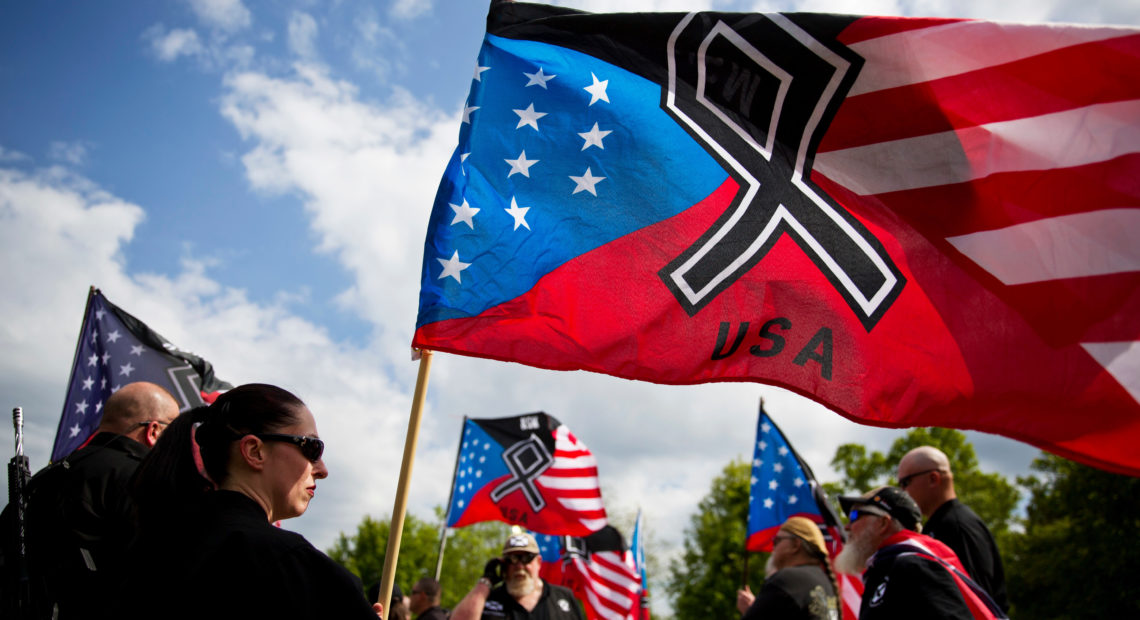 PHOTO: The National Socialist Movement, a neo-Nazi group that has been designated a hate group by the Southern Poverty Law Center, held a rally in Newnan, Ga., in April 2018. CREDIT: David Goldman/AP

The watchdog group blames President Trump, his administration, right-wing media outlets and the ease of spreading hate on social media platforms for the alarming increase. The growth, it says, is largely driven by “hysteria over losing a white-majority nation to demographic change.”

“The numbers tell a striking story — that this president is not simply a polarizing figure but a radicalizing one,” Heidi Beirich, director of the SPLC’s Intelligence Project, said in a statement. “Rather than trying to tamp down hate, as presidents of both parties have done, President Trump elevates it — with both his rhetoric and his policies. In doing so, he’s given people across America the go-ahead to to act on their worst instincts.”

The Southern Poverty Law Center is a revered civil rights watchdog group that has been around since 1971. It is credited with dealing the final blows to the Ku Klux Klan through legal battles.

But in the Trump era, it has been accused of blurring the line between watchdog and activist. Critics accuse the group of overblowing the threat of hate and including groups and individuals on its lists who might not belong, from anti-immigrant groups to exclusionary religious organizations. In 2018, SPLC President Richard Cohen publicly apologized and the group paid out $3.4 million to British political activist Maajid Nawaz for including him on its anti-Muslim extremist list in 2016. The self-declared former Muslim extremist is often criticized for aligning himself with right-wing anti-Muslim politicians, but even his critics questioned his inclusion on the list.

The center found that the majority of hate groups in the United States are driven by white supremacist ideology including neo-Nazis; the Ku Klux Klan, which is on the decline; white nationalists; racist skinheads; and neo-Confederates. But in reaction to the flourishing of white supremacists, the center says that black nationalist groups are also “growing their ranks.” It said the groups are often anti-Semitic, anti-LGBT and anti-white but, unlike white nationalist groups, have little support and basically no sway in politics.

The SPLC defines a hate group as an organization that “based on its official statements or principles, the statements of its leaders, or its activities — has beliefs or practices that attack or malign an entire class of people typically for their race, religion, ethnicity, sexual orientation or gender identity.”

The center’s report tracks with the steady rise in hate crimes documented by the FBI from 2015 to 2017. It reported a 17 percent in hate crimes in 2017, with a particular increase in anti-Semitic hate crimes. But that list isn’t complete because local law enforcement agencies report hate crimes to the FBI on a voluntary basis.

The report found that although white supremacists are emboldened under the Trump administration and driven by the fear of the United States’ changing demographics — by 2044 the U.S. is expected to be majority minority — and by xenophobia, the groups are beginning to lose faith in the president. It quotes the now infamous white nationalist leader Richard Spencer as evidence. Spencer led a group of white supremacists in Nazi salutes and chants of “Hail Trump” after the 2016 election. But in 2018, following the midterms, he said, “The Trump moment is over, and it’s time for us to move on.”

Three groups are suing the Southern Poverty Lawsuit Center over their inclusion on the hate groups list. Among those suing is the Center for Immigration Studies, a conservative think tank that is widely seen as anti-immigration.

“We stand by our hate group listings,” said Heidi Beirich said in a press call. “I would suggest that people take a look at our extremist files … The Center for Immigration Studies, the group has a history of making racially inflammatory statements associating with white nationalists and circulating the work of racist writers.”