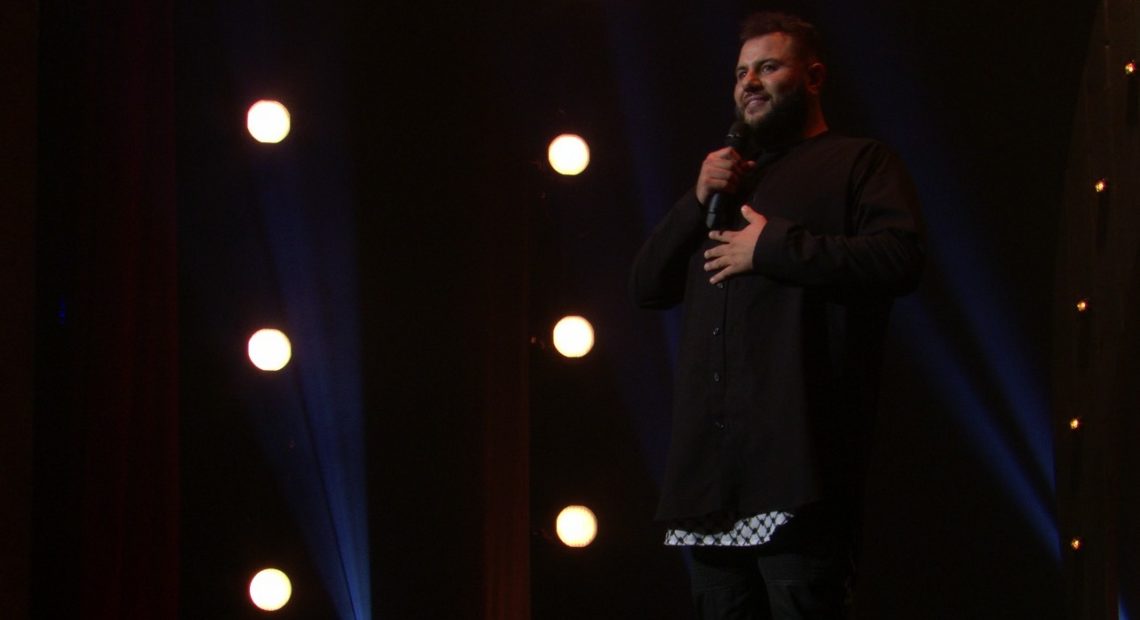 ‘You Get Paid For Doing Therapy’: Stand-Up Comedians On Anger

PHOTO: Comedian Mo Amer, seen here in his Netflix special The Vagabond, says that stand-up has been a significant part of his “coping process” with an itinerant childhood. CREDIT: Netflix

Veteran comedians know all about the funny side of anger.

The late George Carlin wrote an entire bit called “Free-Floating Hostility.” Jerry Seinfeld once declared in the Los Angeles Times that “All comedy starts with anger.”

The rant is often a comedian’s sharpest tool, whether it’s the screams of the late Sam Kinison or the tirades of Chris Rock — like “Stop telling your kids they’re special!”

Comic Mo Amer has plenty to be angry about — he’s spent pretty much his whole life trying to explain his identity. Mo is short for Mohammed (as he says, it’s the most popular name in the world, but try finding a personalized keychain anywhere); Amer was born in Kuwait to Palestinian parents.

When he was 9 years old, his family had to flee the country during the Gulf War; eventually, they settled in Texas. Then, when Amer was 14, his father died.

“I was angry that I didn’t get time with him,” Amer says. “There was anger for having very little semblance of family life, and everybody split up and everybody is in different parts of the world because war sucks.”

Amer found that stand-up comedy was a perfect outlet for his frustrations. Much of his material comes from his experiences as an immigrant from the Middle East — and, as he tells it, traveling internationally can be a nightmare. For years, his only form of identification was a refugee travel document.

In his Netflix special, The Vagabond, he re-creates a heated conversation he had with a customs official who refused to accept it.

“Stand-up, why I love it so much, because it’s — you get paid for doing therapy,” Amer says. “So that was part of my coping process.”

Another part is feedback from the audience. Amer says he got a standing ovation for an early performance of that bit about international travel.

Turning pain into belly laughs is not easy, says Noam Dworman, who owns the renowned New York club the Comedy Cellar. He says Amer is one of the few who can elicit joyous laughter out of pain.

“The thing about Mo is that he has this background of incidents in his life that would cause resentment in somebody,” Dworman says. “But the way he presents it is with such charm and appeal that it’s endearing, you know, people adore him. They love him.”

Stand-up comedians have long used pain, anger and hurt to get a laugh, whether it’s Kinison’s screams of outright rage, or the self-deprecating sarcasm of the late Phyllis Diller recounting a story of her husband getting up and putting on his work clothes after she asked him to kiss her goodnight.

And stand-up can be as much of a coping mechanism for audiences as it is for comics. People have sought relief from fools and jesters as far back as the Middle Ages.

In his 1962 book Heroes, Villains, and Fools, sociologist Orrin E. Klapp wrote that the clever fool is the “safety valve … by which societies release tensions that might otherwise be damaging.” In other words, the communal belly laugh can be cathartic, whether it’s about serious issues or spilled milk.

Sophie Quirk, author of the book Why Stand-up Matters, is a senior lecturer in drama and theater at the University of Kent in the U.K.. She says the comedy club offers jokes, social criticism and what she calls a “bonding experience.”

“There are some comedians who I actively want to see when something happens that makes me angry, say, politically,” Quirk says. “And the people around me are going to be expressing — through their laughter and their groans and their boos and whatever — it might be a real empathy with how I’m feeling about it.”

Anger is, of course, just one emotion a performer needs to conjure up to really connect with the audience. “Some of my jokes come from empathy, too,” Amer says.

Sandra Bernhard, whose sneers are legendary, agrees that a performer needs to tap into a range of emotions on stage. But she says anger is like fuel.

“Anger is energy,” Bernhard says. “And I think you’ve got to be able to access that side of your psyche and be able to fully express yourself within the confines of it.”

Within the confines of a comedy club, tension — or the release of it — is part of what you pay for.