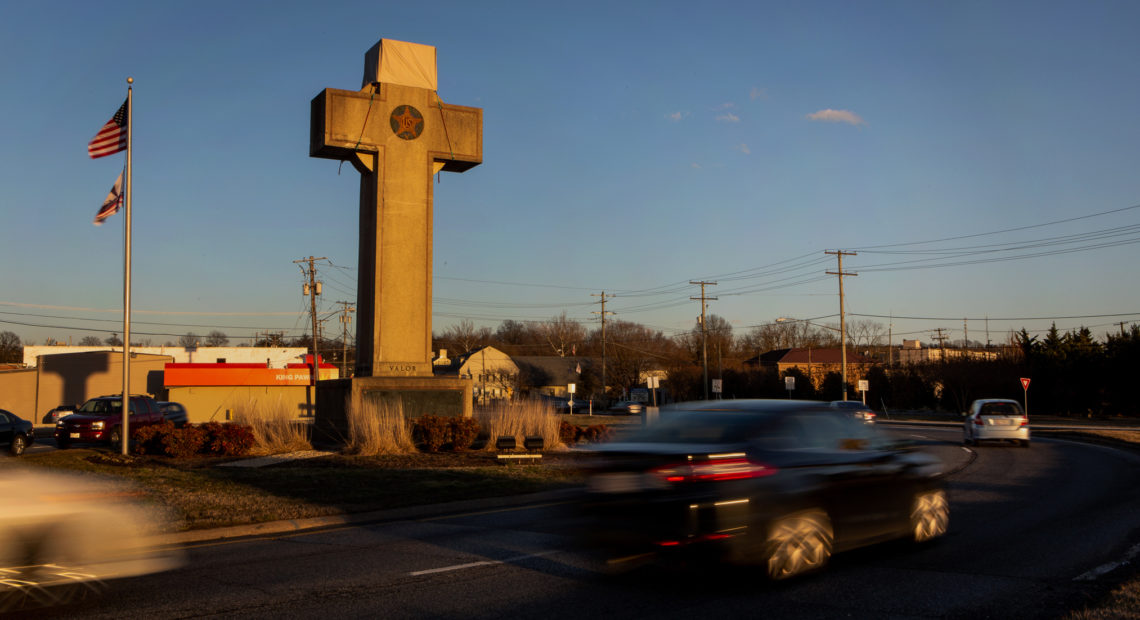 The U.S. Supreme Court appeared ready to let stand a 40-foot cross on public land in Maryland, but the justices struggled to come up with a test to clarify the separation of church and state in this country.

Over the past half-century, the court has used a variety of tests — Is the purpose of the contested symbol or program religious or not? Does it entangle government with religion? Does the government’s action appear to endorse religion?

On Wednesday, arguments were made with three potential paths for tests, but the justices appeared skeptical of all of them:

1. The American Humanist Association, which brought the challenge to the cross, argued to get rid of the cross, move it to private land with private funding and that the cross should not be paid for by the government. The Humanists essentially argued that public religious displays have to be looked at in context.

A giant Latin cross, it argued, doesn’t pass the test of what should be permissible because it’s clearly Christian. The Ten Commandments or a cross or other Christian symbols, though, could be OK if other religious monuments accompanied it.

2. The American Legion and the Trump administration argued in favor of what’s known as “the coercion test.” That would allow public expressions of religion or taxpayer support for religious entities — unless they coerce religious minorities to believe something that is against their principles. The test should be, they argue, whether a religious minority has been “tangibly hurt.”

That standard would allow public support for religious speech unless it constitutes “proselytizing.” That would significantly broaden the standard used until now. Anything else, the Legion argues, would amount to hostility toward and discrimination against religion.

Attorney Michael Carvin, arguing for the legion, urged the court to adopt the coercion test. But it was he who was tested on his definition of proselytizing.

Justice Kagan asked him to define it.

3. The Maryland Parks Commission tried to strike a middle ground, which the court also seemed skeptical of. It argued that the cross is constitutional because its purpose is predominantly not religious, and it fits within a longstanding tradition.

Representing the parks commission was lawyer Neal Katyal, who argued that the cross became the symbol of war dead in World War I when battlefields were marked with rows and rows of crosses signalling the graves of the fallen. Thus, the cross, Katyal contended, had a dual meaning.

Justice Ginsburg interrupted. Does the cross really have a dual meaning, she asked, noting that it is the preeminent symbol of Christianity. People wear crosses to show their devotion to their faith, she said.

But Katyal insisted that World War I memorial crosses have a secular purpose.

Even conservative Brett Kavanaugh, a Catholic, disagreed, saying the cross is obviously Christian. He asked: “What do you say to the Jewish war veterans who believe this dishonors their service?”

Justice Sotomayor posed this — what about the brief from deeply religious Christians, who say that secularizing the cross is “blasphemy”?

One hundred years ago, bereaved mothers in Bladensburg, Md., decided to build a World War I memorial to honor their fallen sons. When they ran out of money, the county took over the cross-shape memorial and its maintenance.

Today, the cross sits at a busy five-way intersection, and the message it conveys all depends on whom you ask.

As far as is known, nobody lodged any objection to that arrangement until the American Humanist Association went to court seeking the removal of the memorial to private land and an end to taxpayer funding for its maintenance.

The association won in the lower courts, and in 2012, a federal appeals court ruled that the World War I memorial violates the Constitution’s ban on government establishment of religion and must be moved to private property.

But now the case is before the Supreme Court and offers an opportunity for a newly constituted conservative court majority to draw a new, more religion-friendly line.

Michael Carvin, a lawyer for the American Legion, argues the cross “evokes the cemeteries in Europe that became a universally acknowledged symbol of World War I dead because of European graveyards.”

Others, such as Monica Miller, an attorney for the American Humanist Association, see its meaning as plain and obvious as the cross is large.

“It’s a giant 40-foot Latin cross,” she said. “There’s no other meaning to the Latin cross other than Christianity.”

Still, the odds are the court will allow the cross to stand. The question is what the court’s opinion will say about how to judge the standard for religious symbols and programs in the future. A decision is expected by summer.