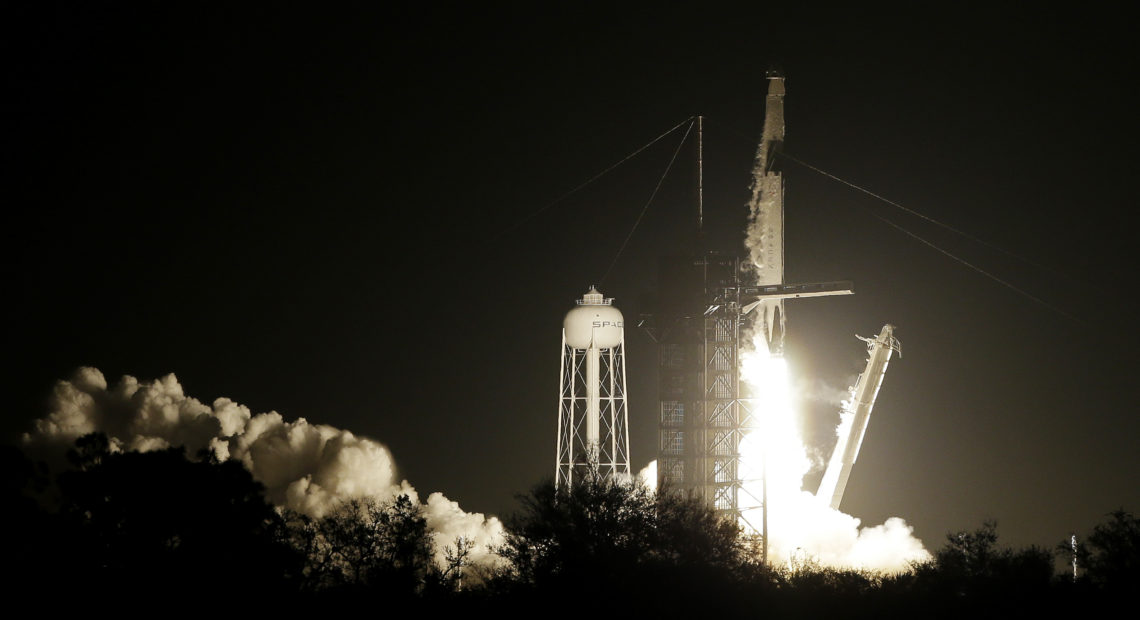 PHOTO: A SpaceX Falcon 9 rocket and Crew Dragon capsule lifts off from pad 39A on Saturday in Cape Canaveral, Fla. CREDIT: Terry Renna/AP

It’s a test flight without crew aboard, designed to demonstrate the potential for carrying astronauts into orbit on a commercial spacecraft.

A crowd cheered as the rocket blasted off in a ball of fire and smoke and flash of light early Saturday, within minutes reaching speeds upwards of 4,000 mph as it gained altitude.

The rocket and capsule separated about 11 minutes after launch. Crew Dragon will go on to autonomously dock with the International Space Station at about 6 a.m. ET Sunday. Plans call for it to remain docked with the station for five days. On March 8, it will undock and re-enter the Earth’s atmosphere, splashing down in the Atlantic Ocean around 8:45 a.m. ET.

NASA has had to hitch rides with Russian space vehicles to get its astronauts to the space station since NASA retired the space shuttle program in 2011, reportedly paying about $82 million a seat.

“I proudly congratulate the SpaceX and NASA teams for this major milestone in our nation’s space history,” he added. “This first launch of a space system designed for humans built and operated by a commercial company through a public-private partnership is a revolutionary step on our path to get humans to the Moon, Mars and beyond.”

The Falcon 9 rocket booster landed on a droneship in the Atlantic at about 3 a.m. Saturday, SpaceX said, making it the 35th successful landing of one of the company’s rocket boosters.

The Crew Dragon is carrying about 400 pounds of supplies and equipment for the three astronauts aboard the International Space Station.

Also aboard is Ripley, named after a certain fighter of an Alien. Ripley is no mere dummy, but “an anthropomorphic test device outfitted with sensors to gather important data about what an astronaut flying aboard the spacecraft would experience throughout the mission,” NASA says.

If the rest of the SpaceX mission goes as planned, two astronauts, Bob Behnken and Doug Hurley, could be flying aboard the Crew Dragon as early as July, NPR’s Nell Greenfieldboyce reported.

NASA is also working with Boeing on a test flight of its Starliner capsule, also without a crew, scheduled for this year.

Watch the video of the launch here.