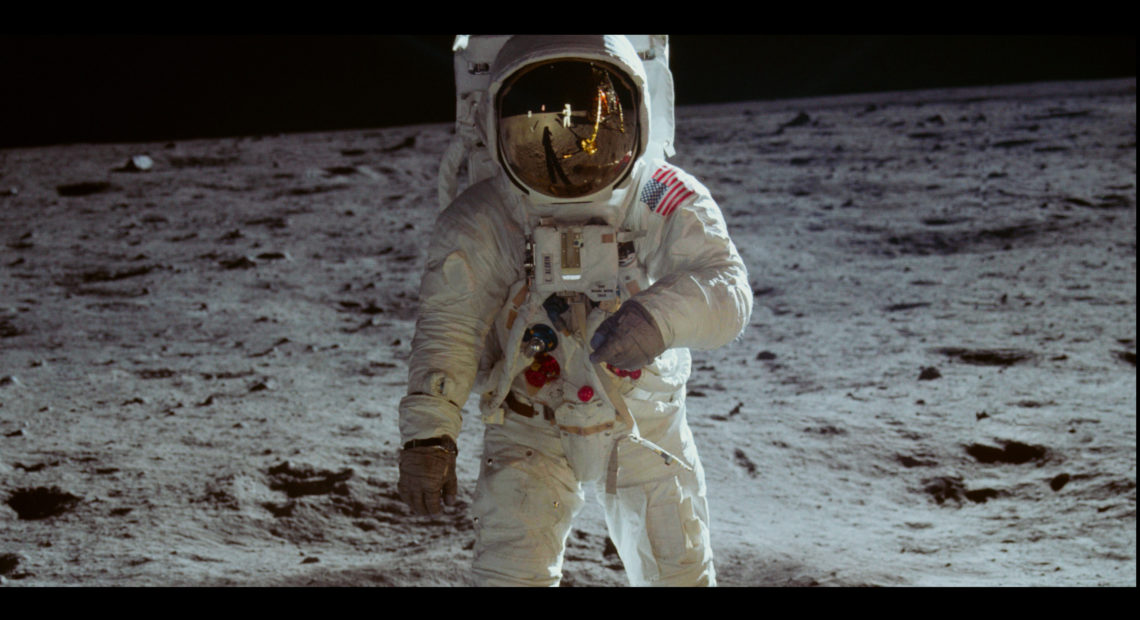 We’ve all seen footage from the Apollo 11 mission, when the world watched as two American men walked on the moon for the first time. It was the stuff of fantasy made real, not science fiction but science, with live images and radio connecting the earth to its first lunar pioneers. “The eagle has landed,” “That’s one small step for man, one giant leap for mankind” — it’s a story we think we know. But we’ve never seen this historic 1969 mission so closely, in such detail, on such a large scale, as we can in Todd Douglas Miller’s documentary Apollo 11, hitting IMAX theater screens Friday.

The Apollo 11 story, as typically told, focuses on the two men to first walk on the moon, Neil Armstrong and Buzz Aldrin. But Apollo 11 extends its wide lens to include the stories of Michael Collins, the third astronaut on the mission, and the work of dozens if not hundreds of men and women at NASA. The film goes on to capture a sense of the politics surrounding the mission, like Kennedy’s speech about the moonshot, and how Nixon was on hand to greet the returning astronauts.

Although earth-bound, the worried faces of men working in Mission Control in Houston are shown just as often as the astronaut’s smiles for the camera. To get a better sense of the pressure in the room, the movie splits the screen to show how many hands were at work at any single moment to make the mission a success. Celebrations are suppressed until the three men return from space, at which point flags are waved, cigars are lit and the frowns of those in Mission Control turn into relieved grins.

The enormity of the operation has been lost to the mythology around a few men. There’s an entire ecosystem surrounding the momentous occasion, from people sleeping on the Florida shores to watch the historic launch from Cape Canaveral to reporters buzzing around tape recorders and quickly dictating their stories over telephones to some poor editor in another part of the country. All this fanfare and tension are rivetingly enhanced by Matt Morton’s electronic score, which sounds appropriately spacey. At different points in the mission, small countdown clocks or speedometers let audiences know what time is left, how fast they’re traveling and if there’s an alarm going off, creating some edge-of-your-seat suspense. Diagrams of different maneuvers help us visualize just how difficult was the real trip to the moon.

The documentary is largely made up of these vintage images and archival footage, painstakingly restored so that they look less like faded photographs but as vivid and fresh as the day they were taken. On the day of the launch, the rocket pops against Florida’s blue sky, women’s colorful dresses stand out amid the sea of men’s white shirts and all eyes and lenses travel upward to follow the Apollo 11 team on their way through the heavens. These details, some captured in 70mm footage, have never been seen before at this scale, and even the familiar images — like the televised broadcast and the jettisoning of various parts in a series of stages — is brightly restored and pieced together, giving the story we think we know an emotional heft. We may already know how the story ends, but the documentary gets us invested in the hopes and dreams of that collective moment. It’s as if the film builds a familiar 20-piece puzzle into a more detailed, photorealistic 200-piece work in clearer, cleaner shape.

The film-critic community’s entreaty to watch Roma in theaters may have been met with some criticism, but watching Apollo 11 on the biggest screen available is a singular and unforgettable experience. The elevator ride up to the top of the rocket has never seemed so long. Eric Milano’s sound design booms and rattles the theater at the right moments, echoing the heavy machinery at work onscreen.

In both screenings I attended, I hear many gasps, a few scattered “Wow!”s and even one whispered, disbelieving “No way!”. No dusty old classroom documentary could have engendered those reactions.

Apollo 11 is wholly different from what we’ve seen before, told from many perspectives heretofore lost in the rush to make heroes out of a few. This documentary has the ability to freshly surprise us with 50-year-old footage, turning us back into kids staring in wonder, wide-eyed, as we watched a rocket take off for the very first time.