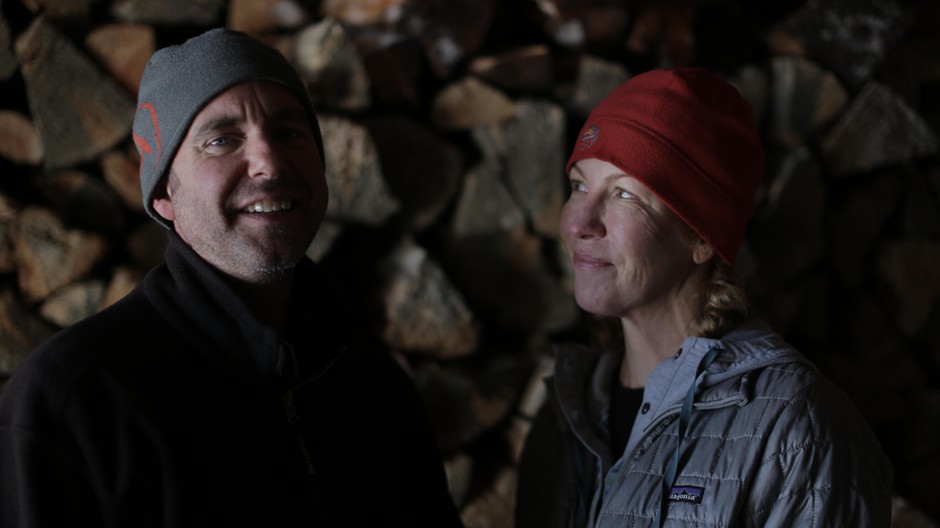 Imagine a ski cabin in the woods.

What comes to mind?

Perhaps a classic “A-Frame” with a roof steep enough to sluff alpine snow. 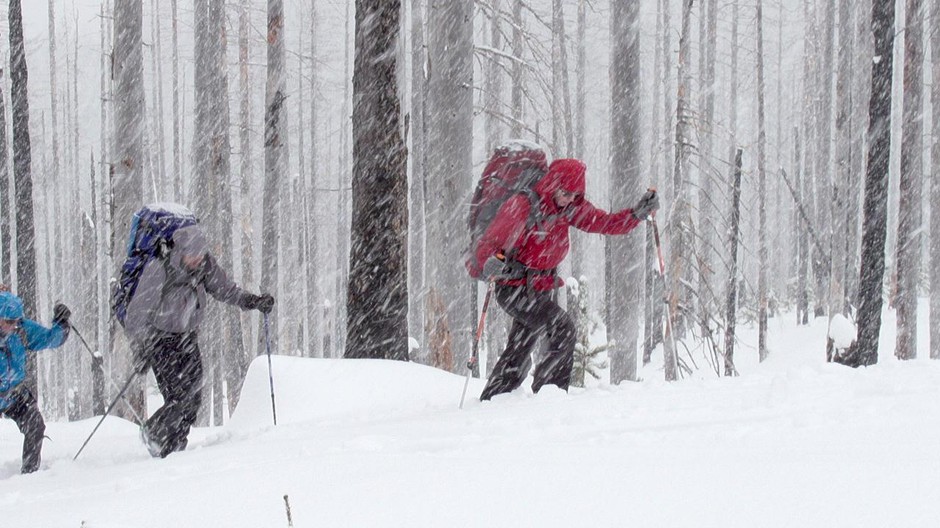 It sits high on the flank of a mountain. And to get to it is a journey — an arduous ski trek wending up and up.

Maybe it is tucked into the trees. And it’s made of thick, rough-sawn lumber. By the front door is a stack of firewood tall as a person. And from the stovepipe twines a wisp of smoke.

From inside, the murmur of conversation, punctuated by laughter.

Welcome to the Tilly Jane A-Frame.

Some people seek out secluded, snow-draped cabins in the wilderness for the solace of being alone, to feed a craving for isolation in our increasingly compact, cluttered, and chaotic modern lives. But the Tilly Jane A-Frame on Mount Hood does not offer that.

Staying at Tilly Jane is a shared experience. It means huddling up with others around the wood stove (that even when fully stoked barely lifts the indoor temperature above freezing). It means throwing down your sleeping bag in the loft alongside dozens of snoring strangers. Or waiting your turn in the morning for the one pit toilet right outside the front door.

The amenities include: a couple of pots to melt snow for water. End of list.

For those that seek out this experience, the Tilly Jane A-Frame is a treasure. It is exactly no more and no less than what is needed to spend a night on Mount Hood for a backcountry trip.

This could be another article about a once little-known spot given too much social media exposure and spoiled — but it’s not.

For decades Tilly Jane was little-known beyond the small community of backcountry skiers, but it was never meant to be a secret. This cabin was built from the very beginning to bring people together.

The A-frame was built as part of a larger national effort to promote outdoor recreation on public lands. Back in the 1930s, during the Great Depression, President Franklin Roosevelt’s “New Deal” formed the Civilian Conservation Corps to head into national forests and parks to lay the groundwork (literally) of our outdoor recreation infrastructure.

For the Mount Hood National Forest, this massive back-to-work effort resulted in miles of trails, dozens of campgrounds and a handful of classic rustic structures celebrated as examples of a unique “Cascadian” architectural style. The hallmarks of this style are the use of local materials such a stone and thick timbers, hand-hewn in the pioneer spirit. 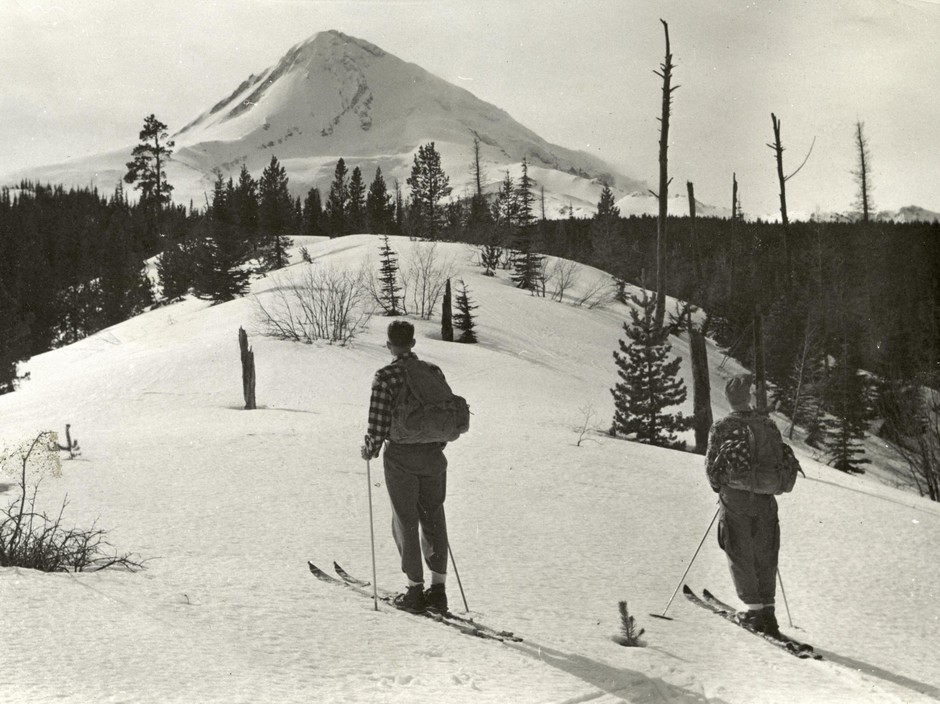 The original way to “earn your turns” in the era when Tilly Jane was built. CREDIT: U.S. FOREST SERVICE

“The act of what we’re doing transcends generations. 1939, 1940s, they were doing the same exact thing that we’re doing. Maybe they were in wood skis at the time, but they were having to skin up and make their way here. So in that respect, we’re continuing that tradition,” says Andre Fortin.

Today, he and his wife Jennifer Fortin are headed to Tilly Jane.

They pause on the trail to catch their breath. Jennifer has been counting the pitches. Three down. Five to go.

Jennifer chuckles. She knows this trail well. Each winter, they return once a month to check on the A-frame.

Andre and Jennifer first came to Tilly Jane nearly 20 years ago. Back then, Tilly Jane had a self-appointed caretaker, Rich Kadney.

“We used to come up in January and spend time with him,” Jennifer recalls. “He had a minimalist approach, a one-man show, to the reservations and just a little bit a taking care of the cabin and bringing in the wood. He paid for the wood and didn’t quite do so much as far as outreach and talking with people but just kinda was quiet and took care of it all by himself.”

Over the years, things began to change for the Tilly Jane A-Frame.

“I don’t think a lot of people offered to help,” says Jennifer. “They assumed someone was taking care of it. But they didn’t know who.”

“The Forest Service wasn’t really managing this cabin,” recalls Andre. “It was unlocked and anyone could just come up any day. So consequently you had 60, 70, 80 people up there in a night.”

Andre and Jennifer hoped someone would step up and fill the role that Kadney had provided for the beloved A-frame.

They waited. And finally realized: that someone was them.

“When he passed away we started realizing ther

Andre and Jennifer Fortin pose for a photo at the Tilly Jane A-Frame. CREDIT: IAN MCCLUSKEY/OPB

e’s so much potential,” Jennifer says.

Although they both had full-time jobs, they took on the challenge.

Since the A-frame is on U.S. Forest Service land, they’d need permission to officially do anything. So they got the Portland Chapter of the Oregon Nordic Club involved. Under their umbrella, they arranged a special use permit with the Forest Service.

Then they created a reservation system to keep the number of users in check with the cabin’s capacity.

They charged a nominal fee and then turned those funds toward repairing and restoring the cabin.

They began to organize volunteer work parties. Their first volunteer teams were small, but word-of-mouth spread.

Now, each fall, they hold their annual wood-stocking event on the first Saturday of October. Folks show up to cut, split, and stack as much as 10 cords of wood to last the winter season. In the past few years, the crew has grown. On this chilly October morning, some 80 folks have shown up. 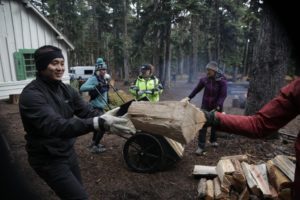 The rain drizzles, turns to snow, then back to drizzle.

The usually-quiet forest rings with the echo of axes and the drone of chainsaws. People’s breath steam and noses drip. Some folks push carts of wood, some stack.

Today, as Harlan Brock welds a chainsaw, his daughter India helps out in a “fire-bucket” brigade, passing the wood hand-to-hand.

India has been coming to Tilly Jane with her dad since she was three. She remembers one of the first times that her dad took her up to Tilly Jane: they encountered a couple coming down the trail, to report that the cabin was out of firewood. Faced with the prospect of spending the night without any heat, Harlan and India turned back.

Now, they are among the volunteers who come here in the fall to help stock up enough wood to last the entire winter.

“I want my kids to learn that you can’t take these things for granted,” said Molly Vogt, another one of the volunteers. “You work hard for them, and you can sustain them, and that’s the beauty of it.”

She started bringing her two daughters to the work parties a few years ago. One of the first chores they helped with was placing logs over the boggy spots on the trail.

“At first it didn’t really make sense to them why we were putting logs down,” she recounts. “But now, whenever we hike here, we see the difference our work has made.”

Vogt considers herself one of the “newcomers” to Tilly Jane, though she’s been coming for about eight years now.

“For me, I have a relationship to this place, I have a relationship with the people around me and there’s some work involved and that’s what sustains me more long-term,” she said. “I could go take a lap skiing — that’s fine. I come back down and it’s over. But what I’ve been contributing and doing here sustains me through the weeks and months ahead.”

She pauses to reflect. It’s pouring rain and gleaming sunlight at the same time. The forest steams. Our lips are blue and teeth chatter. Knuckles are pinched by cold and toes are stiff in wet socks.

Around us: dozens of people are working, laughing.

Perhaps the donated keg of beer helps lighten the mood. But there’s something more. There’s something that brings these folks together, an assortment of ages and backgrounds. The common bond: a drafty old cabin. I want to know why. 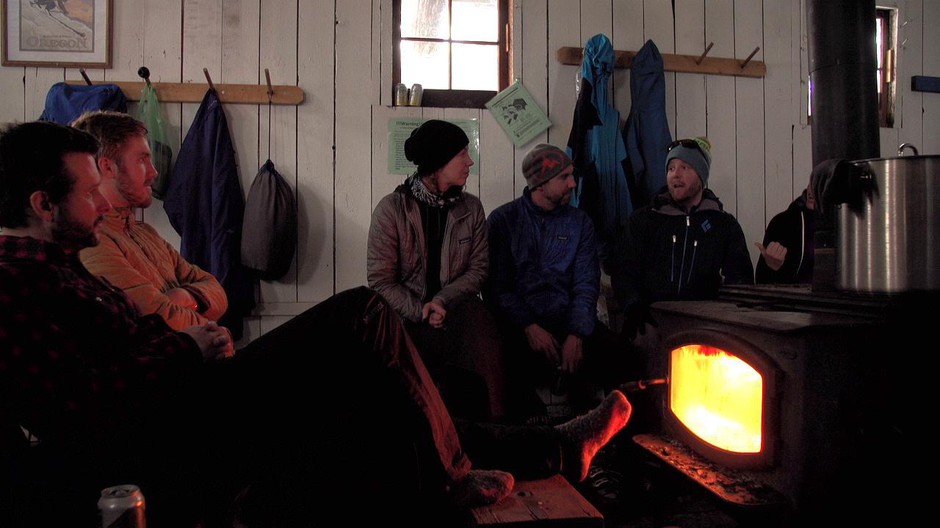 “It’s this outdoorsy, rugged experience,” India explains. “You don’t get it staying in a hotel, for sure. You don’t get it camping, even. It’s like you’re going out into the woods to find this secret house that you need to put in the work to get it running. But it feels like you’re in some kind of historic situation and it feels very cozy and wholesome.”

Backcountry skiers have an expression: “earn your turns.” It literally means that to be able to ski downhill, you first have to put in the effort to climb up. It’s this same spirit Andre and Jennifer Fortin and all the volunteers share.

The Fortins have been driven in their vision for the A-frame. They are not content to simply stock the cabin with wood to burn; they’ve set their sights on nothing short of a full-scale historic restoration.

Andre and Jennifer spent the past three years fundraising. In 2018, they tore off and replaced the cedar shake roof.

The fall work parties get bigger each year. 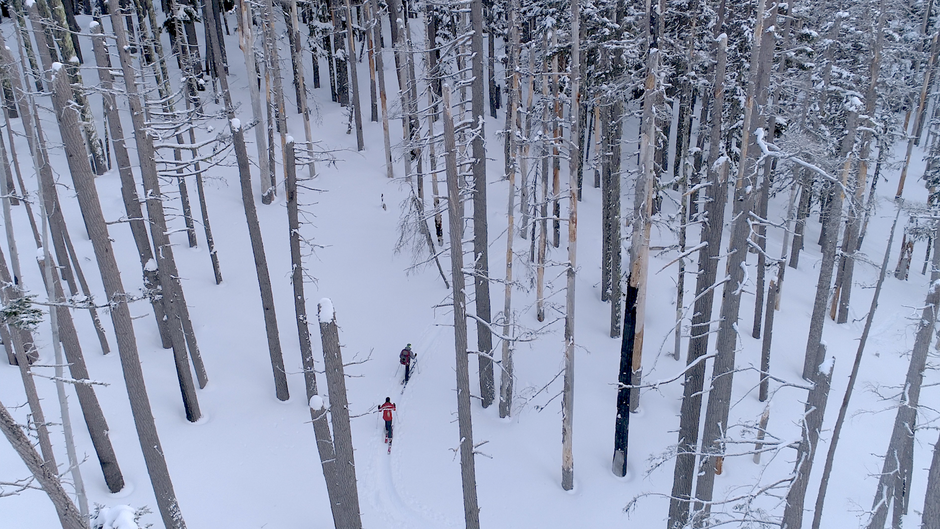 When snow begins to pile, the bulk of hard work is done for the season; they can finally enjoy this place for what brought them here in the first place.

In the evening, they huddle by the fire, sip wine from camp cups, and revel in the camaraderie of folks who love the backcountry.

“You know it’s very simple, very rustic. There’s not a lot to it,” Jennifer says. “And it takes a lot of work, right? It takes a lot to keep it going and I think we enjoy that part of it — keeping it going.”

In the morning, they crawl out of sleeping bags. The wood stove has gone out and needs re-stoking. It’s freezing.

They slip on layers, jackets and gaiters and gloves, and step out into the crisp morning air.

They’ll trudge up and up, gaining another 1,000 feet in elevation. Above the timberline is a small rock hut, another remnant of the Civilian Conservation Corps. It’s filled in with snow — not a place to stop or warm, but simply a point to pause and look out across the vista. Below them, an open pitch of snow that braids into chutes and gullies. 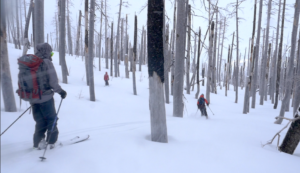 They click their boots and bindings to ski mode. Then grin.

One by one, they push off, feeling the lightness of gravity, and the elation of having earned their turns.